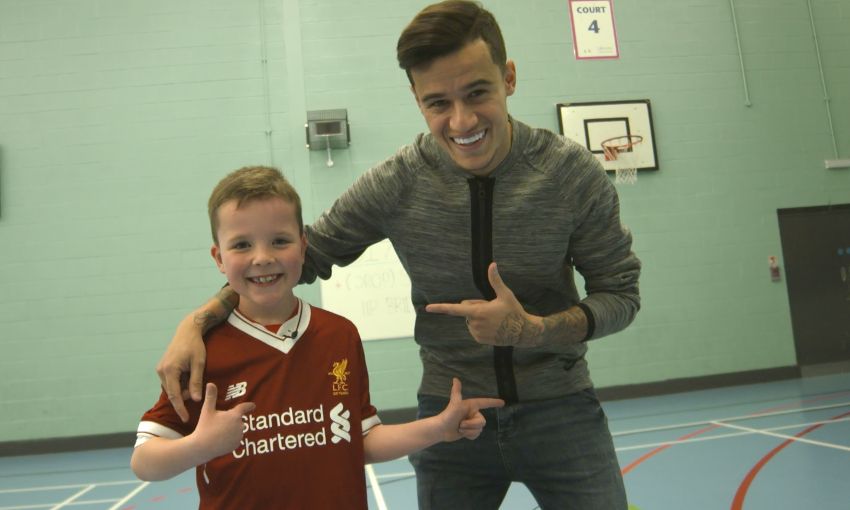 It is often suggested you should never meet your heroes.

But when seven-year-old Liverpool fan Max recently received a surprise visit from Philippe Coutinho – along with a brand new 2017-18 home shirt just for him – it was undoubtedly ‘the best day ever’.

On an otherwise normal afternoon this month, the unsuspecting youngster was at football training and discussing his love for the Reds, in particular the attacking trio of Coutinho, Roberto Firmino and Sadio Mane.

Max will often try to recreate their skills as he turns out for local youth team Atletico Berkley, though he has yet to decide between goalkeeper and midfielder as his own preferred position.

One thing that is certainly not up for debate is his commitment to Liverpool, borne out of his father’s passionate support for the club but a natural course in any case because, according to Max, ‘they are the best’.

So when a key player in Jürgen Klopp’s team suddenly tapped him on the shoulder with a smile and a gift in hand, there was an understandable, slightly star-struck delight…

Max was one of four loyal fans, who embody what it means to be Pure Liverpool FC, to get a special first look at the Reds’ 125th anniversary home kit for next season before anyone else, through an unexpected visit from the club.

Three more individual stories will be told in the coming weeks – of Andrew, Charlie and Robbie – to celebrate and reward their passion and support for the team.

Plus, Max will have the opportunity to be the Reds’ mascot for the final Premier League game of the season, against Middlesbrough at Anfield, courtesy of official kit supplier New Balance.