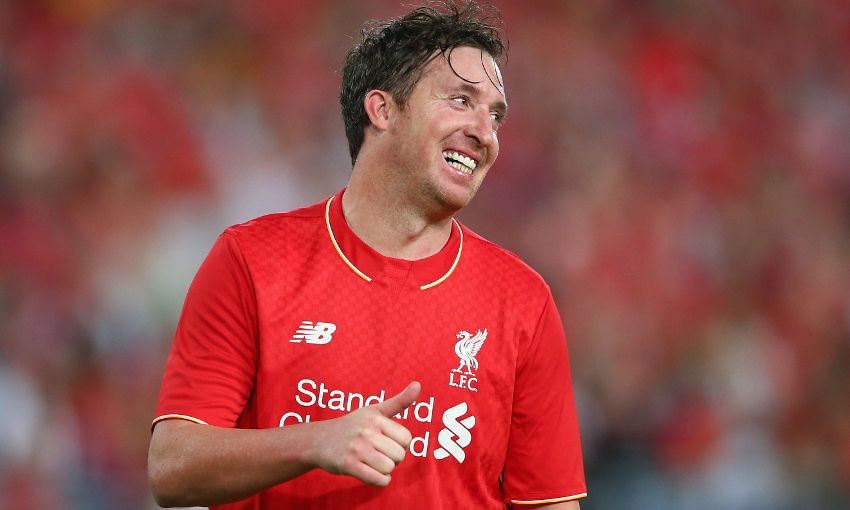 Robbie Fowler hopes a helping hand from the Liverpool FC Legends team he will captain this Saturday can allow him to emulate John Aldridge at Anfield.

A star-studded squad of Reds greats will take to the turf again for a charity match against Bayern Munich which will raise vital funds for the LFC Foundation.

Their previous outing came a year ago, when Real Madrid were defeated 4-3.

Steven Gerrard led the charge that March afternoon with two assists and a goal, though one of the biggest celebrations ensued when Aldridge tapped home at the Kop end from the midfielder’s perfect cross.

And while Fowler is immensely proud to just be involved and have the honour of skippering the side, the man who hit 183 goals for the Liverpool first team is dreaming of his own special moment this weekend.

“Maybe the lads were trying to put everything on a plate for him so he didn’t have to run as far!” the 42-year-old, who converted a penalty in the game, told Liverpoolfc.com.

“You saw when he scored the goal how good it was, not just for him but everyone else – the fans loved it and we as players loved it as well. I’m hoping someone will do what they did for Aldo, for me.”

The Liverpool squad has been bolstered by the inclusion of the likes of recently-retired Daniel Agger and Dirk Kuyt, while fan favourite Xabi Alonso will play 45 minutes for each of his former clubs.

So player-manager Ian Rush has something of a selection headache, though Fowler is delighted by the level of quality and fitness possessed in the Reds ranks.

“No-one is guaranteed a place just yet!” he warned.

“Xabi is brilliant. When I came back to Liverpool [in 2006] you could see how good he was. The passing range and the ability he has got with a football is quite frightening. He has not long retired so he will probably have a little bit more than most of us.

The football comes secondary to the cause, of course, with 90 per cent of the proceeds from the match going to the club’s official charity – the LFC Foundation – to support its programmes and partnerships, which aim to create life-changing opportunities for children and young people.

The remaining 10 per cent of the money raised will be donated to the German giants’ charity, FC Bayern Hilfe e.V.

“We all know what it’s about: raising money for unbelievable charities,” added Fowler.

“A lot of money has been raised for the research centre at Alder Hey, and there are various other charities in and around Liverpool. We know what it’s for.

“As much as we love getting together, putting the kit on, walking out at Anfield and playing this football game, this unbelievable club always does things right. What it’s for will never get lost with us.”

Money raised from the charity game will help to fund a variety of projects for the LFC Foundation and charity partners. You can watch the match for free, live on the official LFC Facebook page, LFCTV GO, Sky channel 429 and Virgin Media channel 544 (3pm GMT kick-off).