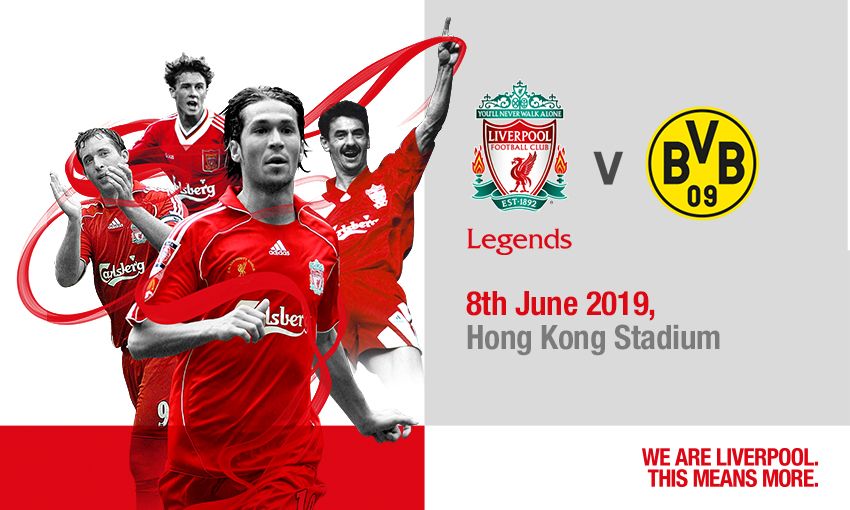 'I can't wait to play for Liverpool in Dublin again'

Liverpool FC Legends will play a special one-off match against legends from Borussia Dortmund at the Hong Kong Stadium this June.

The game, which is scheduled for Saturday June 8, will see heroes from Reds and BVB past pull on their boots again for a contest that continues a rich shared history between the clubs and is certain to have a competitive edge.

Club ambassador Fowler will captain the Reds against the German side, which will be led by Julio Cesar on the pitch, with coaching staff helmed by Jörg Heinrich.

“As former players, it’s always an honour to be asked to take part in these games, particularly when it’s against special opponents like Borussia Dortmund,” said Fowler.

“We’ve always shared a close connection and deep history with the team, namely given that we share a very passionate anthem: You’ll Never Walk Alone.

“We hope to create another fun, entertaining yet competitive game for our fans in Hong Kong and Asia. As a club with fans based all around the world, it’s incredibly important that we take the opportunity to visit our supporters who may not get the chance to experience Anfield for themselves – so we’re bringing LFC to them.”

Riedle said: “It’s always special to meet old friends again, even more so in an iconic spot like Hong Kong, where both clubs are proud to have many fans supporting them so loyally and emphatically.

“It will be a great pleasure to spend a fun afternoon with them on the pitch.

“From playing against Liverpool FC Legends during the last summer at our own stadium in Dortmund, we remember their competitive spirit very well. Undoubtedly, it will be a fierce battle on the pitch, but I’m sure our faces will be full of smiles during and after the match.”

The game at the Hong Kong Stadium will kick off at 4pm local time and ticket prices will start at HK$260.