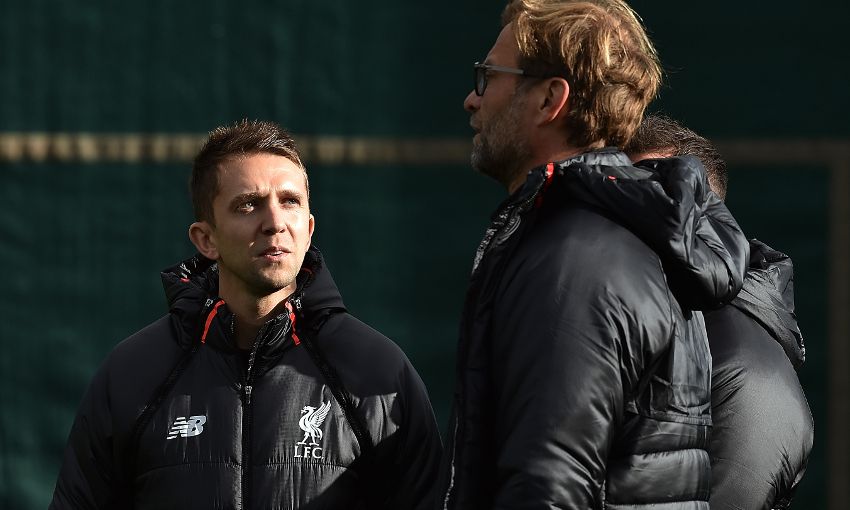 Behind the Badge: 'Jürgen wanted to know about my coaching history'

The Liverpool manager leans back in his chair.

“How I want the game to be played - to dominate the ball and be quite aggressive out of possession… there have been times this season when I’ve had to tweak it slightly to cover injuries, different gameplans, different opposition.

“The philosophy fundamentally stays the same, but you have to have a plan A, a plan B and possibly a plan C that are similar versions of your philosophy but able to affect different opposition.”

It’s put to Liverpool Ladies boss Scott Rogers that his words have echoes of a certain Jürgen Klopp.

“Our philosophies are very similar, weirdly enough,” Rogers agrees. “But everybody’s got their own flip on things and everyone sees the game differently.

“I went to Melwood the other week and spoke to Jürgen and he said something that’s stuck with me a little bit: ‘What I did 15 years ago, I probably wouldn’t do now.’

“I think that’s the same with your football philosophy, how you coach, how you manage, your development in life. What you would do 15 years ago, you probably wouldn’t do now.” 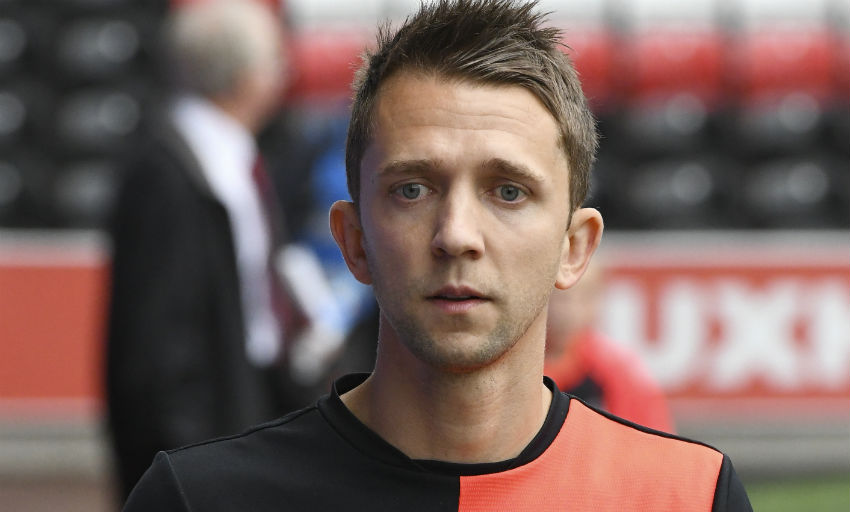 15 years ago, a 15-year-old Rogers was just starting out on a coaching journey that has seen him attain his UEFA ‘A’ license and take charge of Liverpool Ladies before turning 30.

When a knee issue forced him to stop playing regularly, his love of football took him on a different path - first to working with male and female sides at a local club in his native Blackburn, and then, at the age of 21, to managing the women’s team at Blackburn Rovers, the club he grew up supporting.

“There wasn’t much difference in age between me and the players. It was very laidback five to 10 years ago, we were almost a group of friends,” Rogers says.

“They were a very talented group and they helped me a lot because I was able to practise a better standard of coaching, which enabled me to get my UEFA ‘B’.

“I then moved up to the first team and took a few of the players with me, moulded it my way and got my UEFA ‘A’.”

So what made Rogers go down the route of coaching women, rather than men?

“Back then, in order to get on the UEFA ‘B’ and UEFA ‘A’ courses, you had to be working with bigger numbers and 11-a-side teams,” he explains.

“Blackburn gave me an opportunity to do that and I then worked with the first team under Adam Lakeland. When he moved on, I took his role. I’ve never looked back.”

The reasons behind Rogers’ move to Liverpool, which came about in March 2013, have an air of ‘fait accompli’ about them.

He picks up the story: “There wasn’t a fallout with Blackburn, but we had a bit of a different mindset. Me and Gemma Donnelly [now Blackburn Ladies’ manager] wanted to take us down the Super League route and the club didn’t.

“We played Everton and Liverpool in friendlies - we got absolutely tonked by Liverpool - but that was almost like a job interview with Matt [Beard, his predecessor as Liverpool boss].

“He saw me and didn’t have an assistant, so he phoned me up two days later when he realised we’d not applied to be in the Super League and said ‘Do you fancy coming and working here?’ It’s probably the best decision I’ve made in a long time. 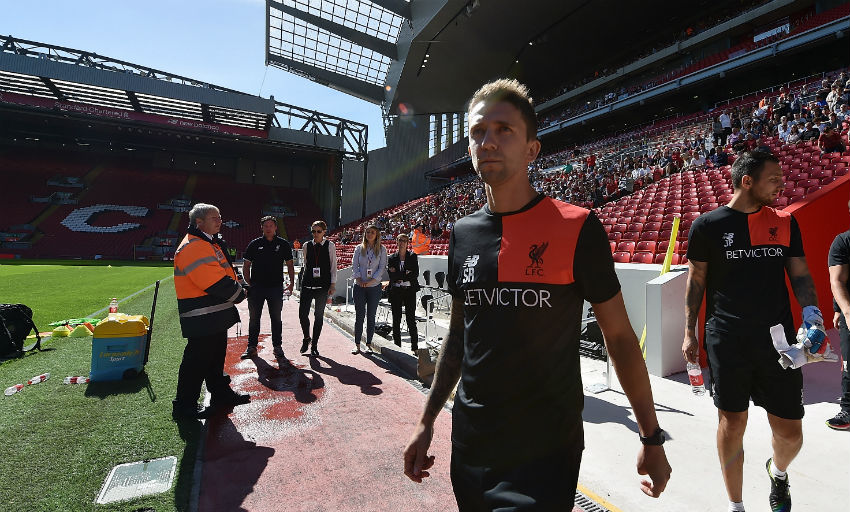 By this point of our interview, it had already transpired that the words ‘I’ve worked incredibly hard’ were something of an understatement.

Roadworks had resulted in our journey from Liverpool city centre to Widnes’ Select Security Stadium, the Ladies’ home ground and base, taking longer than expected.

Conscious of the fact our pre-arranged 20-minute timeslot was dissolving while sat in traffic on the A562 on a dull, chilly late-October morning, we began to plan an abridged interview while making an apologetic phone call to Rogers.

When we finally arrived, 15 minutes of our agreed time together had already elapsed. The Ladies’ final game of the season against Arsenal is 10 days away and the team are scheduled to start training in little over an hour.

Rogers is on the phone in a conference suite overlooking the Select Security Stadium pitch. We wait in the corridor as more time ebbs away.

The call ends and he welcomes us into the room.

“Sorry about that,” the Ladies’ boss says, with a smile. “I run my own business as well as doing this, so things can get a bit hectic.”

“You run your own business as well as managing Liverpool? So you effectively have two full-time jobs, then?”

“In a way, yes. But in both of them I’m surrounded by great people. I’m a bit forgetful sometimes, trying to do 100 things at once, but they’ll bail me out if they have to.”

Rogers, along with his business partner Lee, has co-managed a company that specialises in coaching children across Lancashire for the last decade.

Managing Liverpool and running his own firm. Does he ever find time to switch off?

“Erm, no!” Rogers, who has also had an end-of-season wedding to his fiancée Jen to plan, laughs.

“This [managing Liverpool] is the big one [and] it depends how results are going. My way of relaxing is watching football. My fiancée is very supportive - maybe put that in because it’ll get me some brownie points! - and I have Lee in my business, my players and staff here.

“They’ve all contributed to where I am today and I can’t thank them enough.” 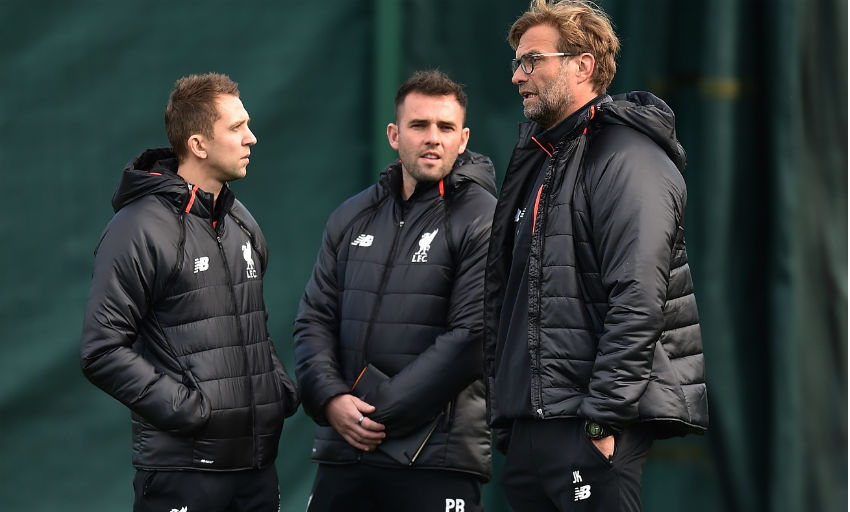 After back-to-back title-winning seasons as Beard’s assistant, Liverpool struggled towards the bottom of the Women’s Super League in 2015.

“Last year didn’t quite go the way Matt wanted it to. Ultimately he got offered a new role in Boston and took it and the club saw fit to trust me to get it back to where we were. I think we’re on track to do that,” Rogers asserts.

Defeat to Arsenal on the final day of the season last Sunday saw Liverpool end Rogers’ first season in charge in fifth place. An improvement on last term, then - and the coach firmly believes the foundations for a successful future have been laid.

“I’m my own biggest critic and I can always think of things we could’ve done better. We had a big staff meeting the other day about what we can put in place going forward. I do believe that you can always get better,” Rogers stresses.

“When I got the job I thought ‘I’m going to do it my way’, so if it goes wrong, at least afterwards I can say they were my players and I can take responsibility.

“I was quite confident in me and the players and the staff, that if I got what I wanted then we’d have a better season than last year. I think the place went stale, and that’s no disrespect to Matt because I was here and part of it. But it was an opportunity to freshen things up and if it didn’t work my way then I can hold my hands up.

“I knew it was going to be tricky, up and down. We brought the average age of the squad down from around 28 to 23. If you can keep a young group of players together for a long period, I think that’s how you get success.

“Both in the men’s and women’s game, it’s been shown that you can spend a fortune and not guarantee success.

“I think you’ve got to build a culture, build a team, and that takes time. I think we’re ahead of schedule - we anticipated to finish between sixth and third.

A couple of weeks prior to our meeting, Rogers and his assistant Phil Backhouse had visited the German at Melwood - an experience that clearly made a lasting impression on him.

“I didn’t expect to spend 45 minutes chatting with him, I thought it’d just be ‘Hello, watch training’, but he spent a lot of time with us, which I’m very grateful for,” Rogers says.

“You’re just trying to pick up little bits. He’s one of the world’s best managers and how many people get the opportunity to go and spend 45 minutes with him and then for him to say ‘You can come back in and watch sessions, talk to Pep [Lijnders] about how we do things and how we could integrate things as one club on the football side’?

“Not to manipulate or take away my philosophy, but there are bits I can take to make sure ‘The Liverpool Way’ is integrated into how we play football.

“How many people get that opportunity? I feel very lucky to be able to go and speak to him and his staff.”

What did Rogers glean from Klopp, then? What did he ask a man who won two Bundesliga titles and reached a Champions League final with Borussia Dortmund before leading Liverpool to the top of the Premier League this season?

“Everything,” he answers immediately.

“How he deals with players, how they announce the team, how they manage players that aren’t in the team. There’s some different ways to the way we do it, [and we looked at] whether we can implement stuff.

“It was a case of tapping into his brain without trying to scare him off! You’re trying to ask as many questions as possible and show that you do know a bit, you’re not an idiot, but he’s got that much experience in the game that for people as young as me and Phil, it’s so valuable.”

‘The Liverpool Way’ is a theme Rogers revisits when asked about whether he feels there is a real connection that binds Melwood with Widnes and the Academy base in Kirkby.

“People forget that it was Liverpool who went full-time first with the Ladies. They said ‘We’re going to invest into it and give it what it deserves to be’,” he says.

“These other clubs have come in with a lot of money, but it was Liverpool who set the benchmark. Liverpool were the first club to say ‘We are one club’, now we hear that with [Manchester] City, Chelsea, Arsenal and people seem to forget us, but we were actually the first to do it. 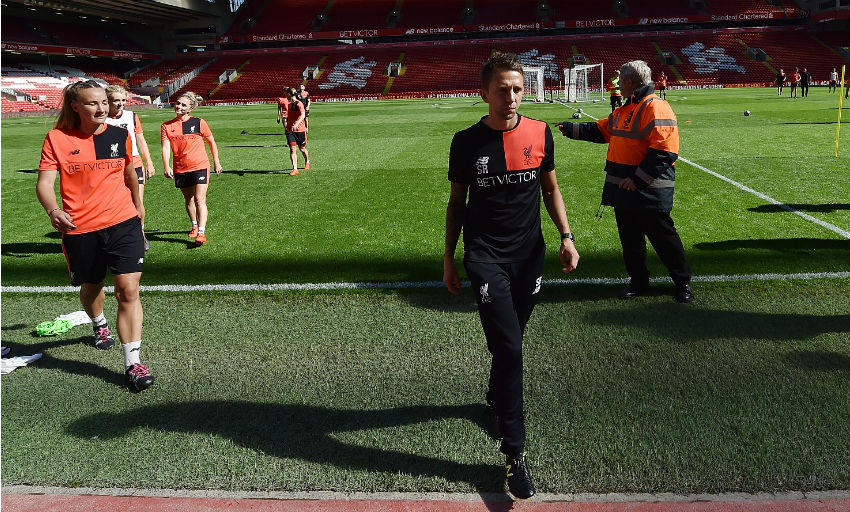 Almost 45 minutes have passed since Rogers curtailed his phone call to greet us for what was expected to be a shortened interview.

The 30-year-old is discussing his plans for next season - which, he reveals, have been on his agenda for ‘three to four months’ - but over his shoulder is Backhouse and his other coaching staff laying out cones for the afternoon’s training session, indicating that it’s time to draw our chat to a close.

Rogers turns around to see for himself.

“They’re a breath of fresh air. The people I’ve put around me are very good at their jobs, which makes my job easier,” he says.

“I realised after a little while that you can trust these people to do their job, they’re fantastic at their job.

“A big part of us turning it around is down to them. They’ve been unbelievable.