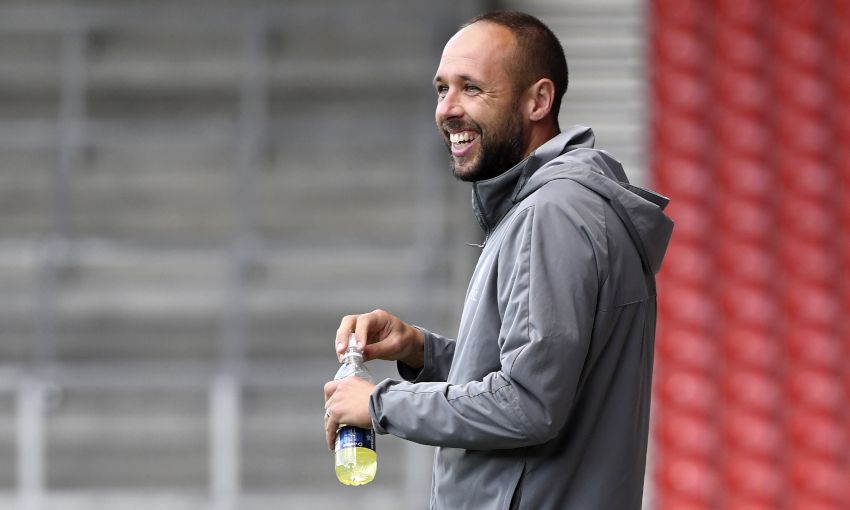 Behind the Badge: How LFC does digital video

It's clear Liverpool's U18s have thrived in the spotlight this season.

Potent enough to score four or more goals on 10 occasions already and spirited enough to hit six winners in the 90th minute or later, the team has so far been spearheaded by a pair of 17-year-olds – in Bobby Duncan and Paul Glatzel – with such an insatiable appetite for finding the net that they’d done so 36 times between them by Christmas.

Overseeing their development is a 37-year-old from Fazakerley who took the reins last summer and has clocked up 17 wins from 21 matches in all competitions, including the UEFA Youth League.

So, is the side’s ultra-entertaining – and, to date, successful – style down to Barry Lewtas’ personal approach, the overarching philosophy of the club or simply the fact he has so many gifted attackers at his disposal?

“It’s probably a mixture of all those things,” the U18s manager tells Liverpoolfc.com.

“Obviously at the Academy we’re trying to develop players who can attack and dominate the ball and handle that part of the game. And that’s my role as well; so in terms of me, I’m really keen for us to play a particular style of football that I think will prepare the boys for the next level.

“I certainly believe in that type of football but obviously you need the type of players that can execute it, and we’ve got boys who are comfortable on the ball and brave, especially under pressure – scoring some of the late goals, team moves from end to end.

“In the end, it’s the boys who execute it. We’ve got to drive it as a set of staff, but the tough bit is doing it under pressure week to week, and that’s credit to the players.” 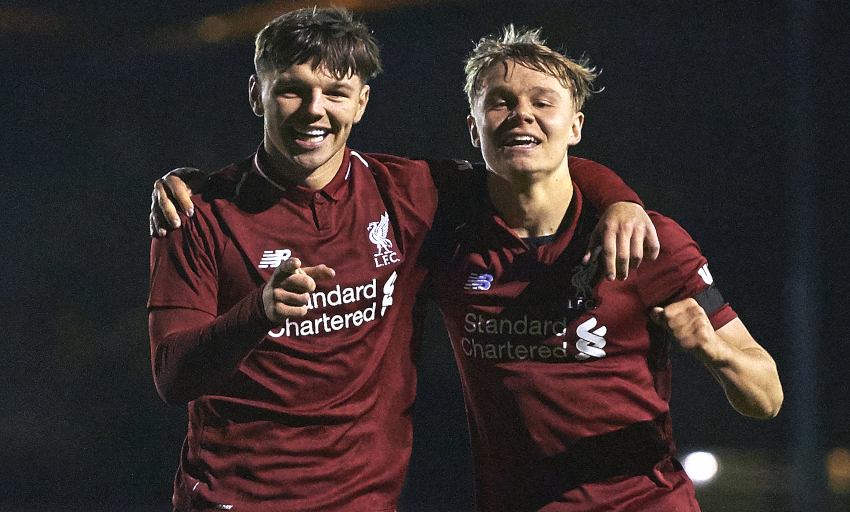 But it would be a disservice to Lewtas’ charges – born in the year Gerard Houllier’s Reds did the treble – to describe them as merely entertaining.

Ruthless and gritty, too, when circumstances demand, the U18s head into Friday night’s league clash with Sunderland at the Academy – their first fixture back after a three-week recess – just one point off the top of the division.

Progress to the fourth round of the FA Youth Cup and the quarter-finals of the Premier League Cup was secured before the turn of the year, while in Europe, a Lewtas-led U19s group have again reached the last 16 of the Youth League after topping a group that mirrored the senior team’s Champions League section.

And, for good measure, as recently as last Sunday a Liverpool U18s delegation claimed victory in the Mercedes-Benz Junior Cup, a prestigious indoor tournament held in Stuttgart.

Lewtas and his charges have laid the groundwork for a memorable campaign, but the paradox of youth management means success is ultimately defined by players graduating to the U23s and the first team.

The former Wigan Athletic and Bolton Wanderers coach remains confident, however, that the right balance can be struck for his side to remain competitive in 2019.

“One thing I’d say is, we’ve got a big squad, and some probably deserved to play more than they have,” he explained.

“We had a meeting at the beginning of the year where we said we wanted to compete on all fronts, but I’m quite clear on what we’re trying to achieve, which is to progress boys onwards.

“I also feel that if you are a part of this club, being in all the cup competitions and quarter-finals and semi-finals is part of what the club’s about. The experience of being at the top of the league, in the last 16 of the UEFA Youth League, the quarter-finals of the Premier League Cup, that’s hopefully the environment they’re going to be moving into – if they’re good enough.

“So it’s a real fine balancing act. The league table is probably not something I’ll lose sleep over, but it’s nice that the boys are in and around it because it creates that pressure and responsibility, and it makes the games a little bit more significant.

“We did say the boys who start the season might not necessarily finish the season, and what’s quite nice is that the boys who’ve got us to this point will maybe hand the baton over to the next lot if there is movement, and it’ll be their job to play the next round of games.

“I’m quite balanced about it. It’s part of the job and it’s not something I’d make excuses about.” 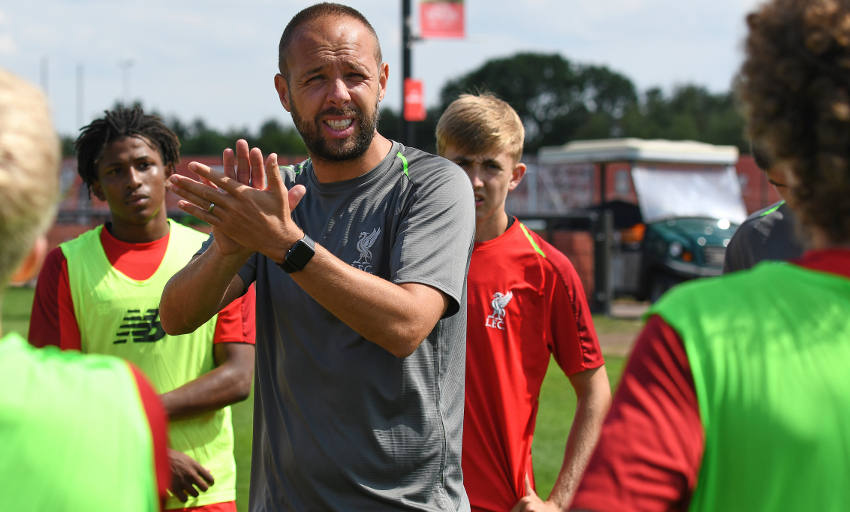 Lewtas stepped into coaching immediately after finishing university in 2003, recruited by Wigan to begin a career that has been spent exclusively in the north west.

Much like the players he manages, the qualified teacher gradually moved up through the age groups, working with boys aged 10-13 in his first role and then with 11 to 14-year-olds at Bolton before joining Liverpool in 2013, where he took charge of the U16s until the opportunity to succeed Steven Gerrard as U18s boss arose last summer.

“It was never a case of wanting to be in certain places at certain times,” he states. “As the years go on, you develop, but I never look too far.

“It just so happened that I was with the U16s and obviously Steven moved to Rangers, so I spoke with Alex Inglethorpe and was offered the opportunity. I thought Steven did a fantastic job last year, and obviously a lot of those players are in my team now.

“Steven has been in, and it’s nice, he asks how the lads are doing, because obviously they played a big part in his first coaching role.

“For me, it was about picking up the baton because the team was left in a good place, and the advantage I had was I’d worked with the players the year before at U16 level, and the second years at U15-16. So, knowing those boys, we were able to carry on that style; they probably knew what I was looking for and that made it a little bit more straightforward.

“The attention we’ve had probably comes from the games and the goals, I think we’ve served up some good football that has been quite exciting, and obviously the two boys up top have put the ball in the net.”

Lewtas considers the experience Liverpool’s aspiring talents have gained from a productive UEFA Youth League adventure this season to be invaluable.

From travelling abroad to facing a variety of tactical challenges to playing home games in St Helens, the competition serves up pressure situations to learn from.

“I lead the team out and my name is on it,” he says. “But [U23s manager] Neil Critchley has played a big part in a lot of the stuff that we’ve done with the U19s in terms of game plans and stuff.

“It’s probably a little bit closer to the actual thing, and the matchday experience at St Helens has been fantastic, it’s a great facility.

“Red Star Belgrade and Napoli were both set up to stop us playing, which is great, a challenge for us to overcome, whereas Paris Saint-Germain was more of a shootout.

“The styles of play, the experience of travelling, playing in front of lively crowds away from home, dealing with suspensions and injuries – it was great; different, but enjoyable.

“It’s the same style but we set up a little different formation-wise, with more width on the pitch. There’s been a lot of difficult decisions, with Adam Lewis and Yasser Larouci fighting over the left-back spot and having to leave out one of Glatzel and Duncan.” 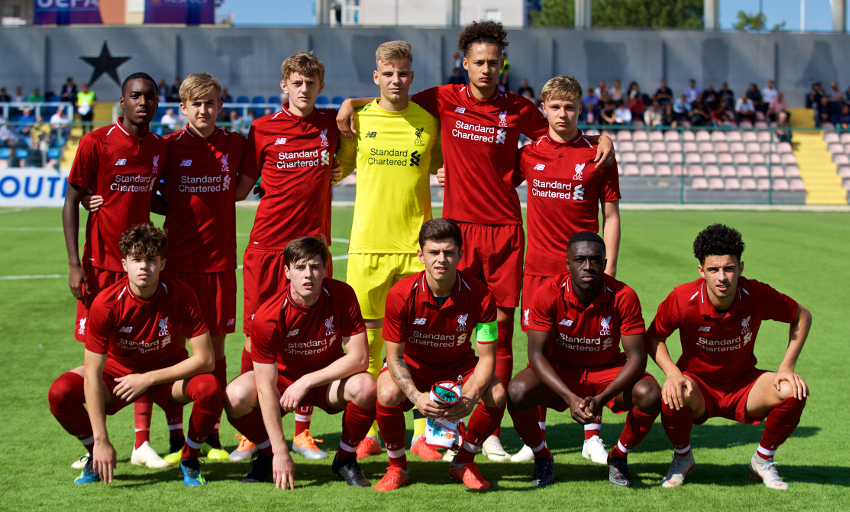 Duncan and Glatzel have, inevitably, been the subject of growing interest as a result of their prolific form this term – both as individuals and a strike partnership.

But Lewtas insists no special measures are required to keep the pair grounded, with the teens just as concerned with totting up assists as they are bagging goals.

“I can’t control what’s said outside, we’ve just got to treat the boys the way we normally do, and there’s certainly no hype at training,” notes the U18s boss.

“It’s great for them to get the headlines, that’s what they do, but there certainly seems to be a humility there, which is good to see. We’ve got a genuine team spirit; whoever gets the goals, the boys value each other and the contribution each player makes.

“It’s probably under the radar how well the goalkeeper [Vitezslav Jaros] has done this season, in and out of possession, and he’s made some big saves for us as well.”

Looking to the future, Lewtas is keenly anticipating the day when Academy and first-team operations are brought together at an expanded complex in Kirkby.

“As a club, getting it onto one site is certainly exciting and I’m sure there will be plenty of opportunity for movement [through the ranks for players],” he adds.

“Being able to look out at the first team and think, ‘That’s where I want to get to’ – it’ll almost be in touching distance and that’ll be quite powerful in terms of motivation and the psychology around it.”

For now, though, the Academy is sure to be an exciting place to be every time Lewtas’ side take to the field.

We speak to various members of staff across the first-team, Academy and Women’s set-ups who dedicate their lives to the club each and every day, covering a variety of different roles that make a vital contribution in preparing the Reds for action.