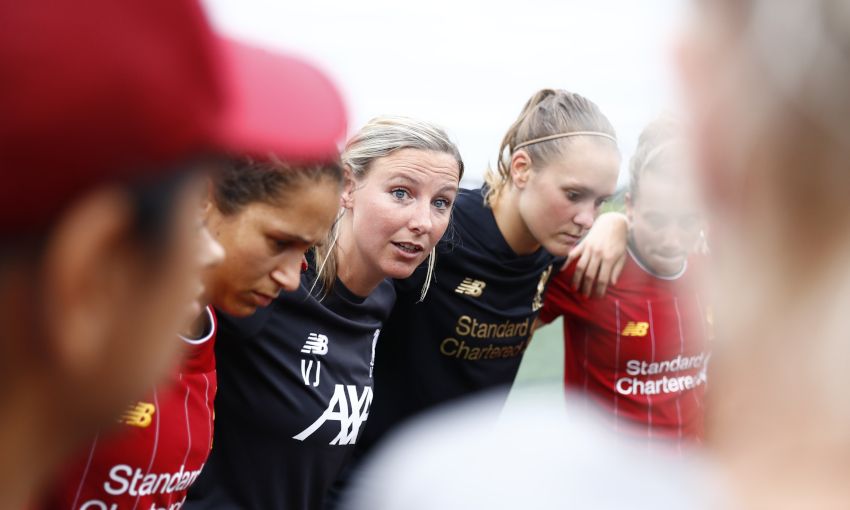 Vicky Jepson has just been informed that three years have passed since she was last the subject of Behind the Badge. But if those 36 months have felt like something of a whirlwind for the former Macclesfield Town Ladies player, it’s no surprise.

Back in September 2016, Jepson, who first joined Liverpool in 2009, was celebrating being named FA Female Development Coach of the Year and splitting her time between three different roles: project lead for LFC Foundation, coach at the Girls’ Centre of Excellence, and manager of the Development Squad.

Now, her responsibilities are condensed into one position likely even more demanding than those previous three combined – manager of Liverpool FC Women.

October 26 will mark the one-year anniversary of Jepson’s appointment; 12 months of hard graft on the touchline at Prenton Park and the training pitch at Solar Campus.

“The thing is, we had only played one league game last year when Neil [Redfearn] departed,” the 32-year-old, who served as interim boss before being permanently promoted from the assistant manager role, reflects.

“So, even though I was appointed in October, there had been two months where we didn’t know who was going to be the manager coming in – am I going to work under somebody? I was really focused – as were the girls – on the next game we were facing, so it was quite an experience for me to go through that and not worry about anything externally, just concentrate in-house and worry about our next game.

“It was an absolute honour, having worn the badge for 10 years and travelled around and come to understand what a powerful badge it is. I knew it was a big responsibility and embraced the pressures that came with it. Obviously when you inherit a team as a manager it’s always tough, because Neil had brought players in that he knew and had worked with before.

“I was still trying to find out a lot about them as people and as players, but once you’ve done a full season with them you really start to understand their strengths and weaknesses, what motivates them and what doesn’t.” 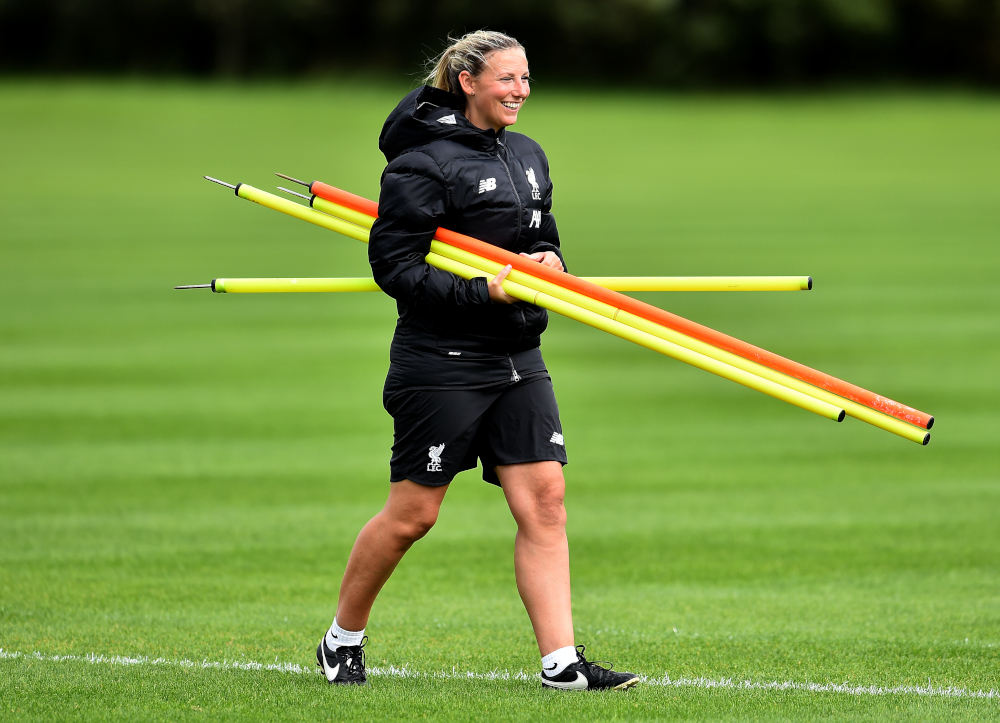 LFC Women went on to finish eighth in the Women’s Super League, but as a transitional campaign drew to a close Jepson had the tangible sense of an identity forming within the team.

It’s a foundation she intends to build on as time passes, albeit after a frustrating start to the 2019-20 season with narrow defeats in each of their three fixtures to date.

“Coming towards the back end of last season we got it right in terms of really strong foundations out of possession, understanding our strengths in possession, dealing with setbacks and injuries, growing youth talent from our U21s and understanding who’s right to transition into being a senior player,” continues the lifelong Liverpool fan.

“So in this summer transfer window, we brought Becky Jane, Mel Lawley and Jade Bailey in, and those three were selected because they represent all three units – Mel is in the front three, Jade plays in midfield and Becky has experience in the back four. Also, all three of those players have something to prove, because last season they weren’t playing 90 minutes at their previous clubs.

“Obviously it didn’t work out for Neil and he chose to depart, and I had to stand strong and be the glue to hold us together, but there’s been loads of positive changes from where we were this time last year. It’s been time-consuming and I’ve had to sacrifice a lot of my own personal time, but it’s all been worth it and I think now we’re in a really good place as a squad.”

Following England’s run to the FIFA Women’s World Cup semi-finals earlier this year, women’s football is enjoying a hitherto unseen level of popularity and cultural prominence in the UK.

And, having joined Liverpool’s men’s team on their pre-season tour for the first time back in July, then recorded their highest attendance of more than 1,500 at Prenton Park for the WSL opener against Reading earlier this month, LFC Women are hopeful of capitalising on the growing enthusiasm around the game.

“I’ve been to the last three World Cups, so I’ve seen a massive difference in terms of how the women’s sport has grown in popularity and the number of fans coming to games,” remarks Jepson, who has her own connections to the national set-up after being part of the coaching staff when England finished fourth at the U17 Women’s Euros last year.

“When you hear the stats about 11.7 million people watching the Lionesses’ semi-final against the USA on the BBC, that’s massive, such a big win off the pitch.

“In terms of role models, when I was younger there wasn’t many, apart from Mia Hamm in the US. For me it was people like Steven Gerrard, it was always male players that I would look up to, they were the posters on my wall. But I think what’s great now is, when you go into schools they can list a load of female players that they look up to. I remember being in a primary school and asking, ‘Who’s your favourite player?’ and a lad said, ‘[England defender] Lucy Bronze.’ I thought, ‘That’s fantastic!’

“Going on a private jet to the USA with the men’s first team, that’s the type of thing that adds strength to our armour, if you like. Notre Dame Stadium was the big one really, because when we walked out on the pitch everyone was chanting ‘Liverpool Ladies!’, and we were like, ‘What’s going on?’

“A lot of the reason why they celebrate women’s football and women’s sport out there is because the US Women’s National Team has been so successful and won the World Cup in the summer. So it was a good time for us to be out in the States and we got such a good reception, there’s such a massive Liverpool fanbase out there and they just embraced us.”

With that upsurge of interest in women’s football surely bound to manifest itself in more young girls getting involved at a grassroots level, is there any part of Jepson pining for her days at LFC Foundation?

“I have a real passion for growing the game, from my own journey, and with these fantastic leaps forward – the Women’s World Cup, the great work the Lionesses did, seeing the WSL attendances boosted – I think we all have a responsibility to try to showcase this beautiful game, which is growing so quickly, to kids at grassroots level and in the primary schools, high schools and colleges, to make sure we have a bigger base which feeds through to the elite level,” she replies.

“Fortunately, I think we are a club that do that anyway. We have three youth players in our squad that have come right through, who are doing fantastic. One – Missy Bo Kearns – has been at the club since she was eight, and I speak about her a lot because I remember tying her shoelaces for her!

“What we have to do is balance out what type of player we buy in, and how, but also how we develop and nurture young talent to transition into becoming senior professional players.”

It’s those little payoff moments, when players she has grown close to achieve significant goals, that appear to give Jepson more satisfaction than anything else.

“I was really proud to see Christie start for Scotland against England because I knew how much it meant to her,” continues the Chester native. “When I saw her sing the national anthem I was a bit emotional; I could see how she was belting it out, so that was really pleasing for me.”

Any visitors to Prenton Park on a Sunday afternoon will be well aware of the unique, good-humoured atmosphere LFC Women’s fans create there.

And while Jepson is naturally more concerned with results than creating a ‘product’, her overarching goals for the team – entertaining football, further engagement with fans, local youth to the fore – just so happen to be precisely the kind of things that will make them more and more appealing to spectators in the long-term.

“For us as a squad it’s great that we’re training on grass every day and then playing on grass on matchday,” she says.

“For us it was a big step forward in terms of the resources we can access at Tranmere Rovers. Prenton Park is a fantastic stadium, and I know the two clubs have a good relationship, so it works well for us to be based there.

“There’s not a high cost to attend, so there’s no barrier there, and it’s family-orientated. After every game – win, lose or draw – the girls spend a good 20 minutes signing autographs and taking selfies. They can’t underestimate the power they have as role models.

“In terms of our style of play, right now I think we’re quite an explosive team with a lot of pace in our front line, so we’re quite counter-attacking and always look to threaten going forward.”

Jepson and her players face their biggest game of the season so far at noon on Saturday, as the Reds take on their Manchester United counterparts.

Having only formed last year, Manchester United Women’s inaugural season ended with the Women’s Championship title and promotion to the top flight, but after losing to Manchester City and Arsenal thus far they will be just as keen as their visitors to get off the mark at Leigh Sports Village.

The showdown has a wider significance that goes far beyond Leigh, however, as one of world football’s most compelling rivalries finds a whole new frontier.

There’s also a personal significance for the two managers, who are well acquainted given Red Devils boss Casey Stoney spent 14 months at Liverpool before ending her playing career in February 2018.

“This will be the first time we’ve played them in a WSL game, which will be good and I’m really looking forward to it,” Jepson concludes.

“I’m friends with Casey and I think she’s done a fantastic job stepping in as a manager at Man United. We’re really looking forward to it, because it’s always a great game when those two badges go up against one another.”