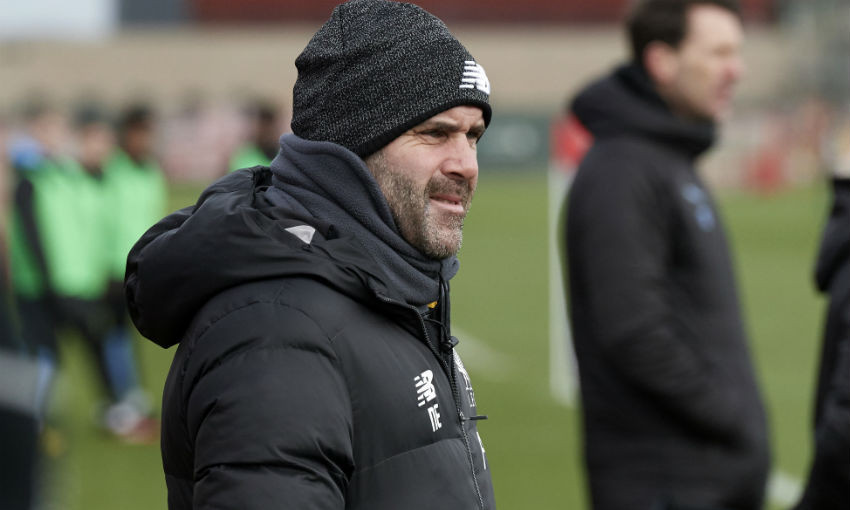 Behind the Badge: The man in charge of Anfield's hallowed turf

“Life is what happens to you while you’re busy making other plans,” goes the old John Lennon lyric.

Neil Edwards can certainly relate to that sense of the most significant moments in your life being the ones that sneak up on you quite suddenly.

Almost 30 years ago he was a teenage goalkeeper without a club or a clear future in the game, driving along the motorway from Leeds to Stockport with all his belongings crammed into the back seat of the car.

Within a few years he was an established pro who had played in four Wembley finals inside 24 months. Then, seven years ago, his fledgling career as a goalkeeping coach having stalled after leaving Bolton Wanderers, Edwards was summoned to a meeting at Kirkby.

“The phone call came out the blue,” he recalls. “I came in, there was a contract on the table, and I said yes straightaway. If I hadn’t been let go by Bolton, potentially I might still be there. But things happen for a reason.” 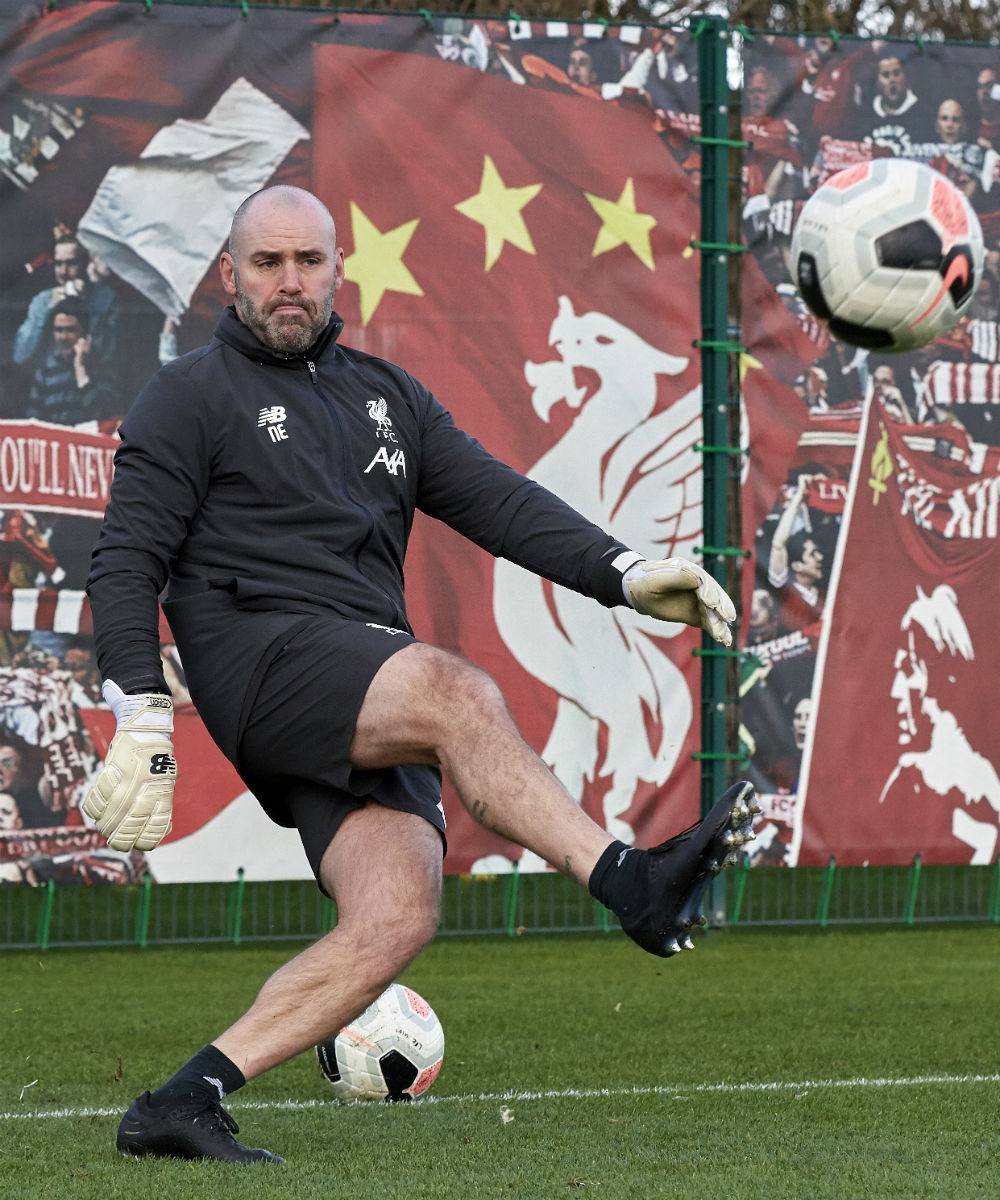 Whether it was fate or simple good fortune that made it happen, both employer and employee can reflect with a fair amount of satisfaction on the outcome of what sounds like the shortest job interview of all time.

Now in his seventh season as Liverpool U18s’ goalkeeping coach, Edwards is well established as a key part of a staff which has helped assemble and develop a fine roster of goalkeepers from youth level through to the first team.

Alisson Becker sets a high standard for his fellow custodians to aspire to, but Academy products like Caoimhin Kelleher, who has featured for the first team in the FA and Carabao Cups, Vitezslav Jaros, who has seamlessly transitioned from U18 to U23 level, and Jakub ‘Kuba’ Ojrzynski - the main focus of Edwards’ tutelage as current U18s No.1 - have shown no fear and no little ability in attempting to live up to it this season.

To top it all off, Edwards and U18s boss Barry Lewtas had the thrill of lifting English football’s most prestigious youth trophy - the FA Youth Cup - just under a year ago, Jaros acquitting himself well through all 120 minutes and a subsequent penalty shootout when the young Reds defeated Manchester City in last April’s final. 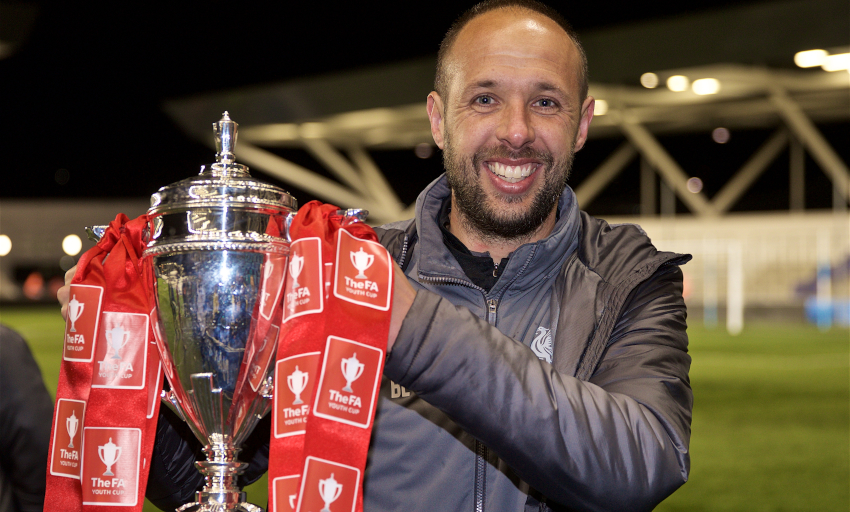 “It’s been fantastic,” says the man known exclusively as ‘Taff’ at Liverpool’s Academy.

“To be fortunate enough to work for this football club is one thing, but to be involved in that sort of stuff… I knew Barry from Bolton, he’d worked with the younger age groups there, and he’s very hard-working and precise in how he does things. Winning the Youth Cup was a great achievement for all concerned. It’s nice for the staff and everyone at the club, but more importantly it’s fantastic for the boys to win something and get into the habit of winning things.

“We want boys to have careers, we want them to get into the first team, and if they can’t you try to make sure they can have a long career elsewhere. Part of the journey is winning and losing, so it’s very nice when you’re fortunate enough to win things. Then for the kids to be involved in things like the UEFA Youth League, it’s a great opportunity to open their eyes and let them see other parts of the world. It’s also a chance, with a lot of the big teams we’ve played, to see how they work and what they do.

“With the U18s, what you start with at the beginning of the season is generally not the same after Christmas, because people step up a level or go out on loan, and we might take boys from the U16s, which has a knock-on effect, so it’s an ongoing churning out. But we’ve got no complaints at the moment.”

Hailing from Poland, the Czech Republic and the Republic of Ireland respectively, Ojrzynski, Jaros and Kelleher all have very different temperaments and attributes, the challenge for Edwards being to make sure each excels regardless.

“They’re all different characters, no-one is the same, and you wouldn’t want them to be, to be fair,” Edwards, a son of Penywaun in South Wales, continues.

“Kuba’s got a very good work ethic, he works tirelessly not just on the training ground but off it. We’re continuing to work hard on all aspects with him. He’s a new boy in the system, it takes time, hard work and patience - not just from the goalkeeper but from the coaches - but he’s got that work ethic and mentality. He’s only 17 years of age, and for a goalkeeper playing in the Premier League at 21 or 22 is rare, so time is on his side as well.

“Then there’s also Oscar Kelly [a 17-year-old Scouser and Ojrzynski’s colleague in the U18s], who has been here from a very young age, working hard through all the levels to attain the dream.

“Vit [Jaros] is back fully fit again now [after an elbow injury], which is good. He’s so comfortable with both his left and right foot and very confident on the ball. He can ping and drive balls with either foot.

“As for Caoimhin, again, a very different character, laid-back, almost horizontal at times! Nothing seems to faze him, and he’s comfortable playing out too. He was so laid-back in training when he first came over as a 16-year-old, I think his first game was Derby away, and the staff were all intrigued to see how he would handle it, but he handled it in exactly the same way, which is some mentality to have as a young goalkeeper.

“As you see him going through the levels now, he’s still calm on the pitch, never hurried, very good at not showing emotion - which is another excellent trait to have as a ‘keeper.” 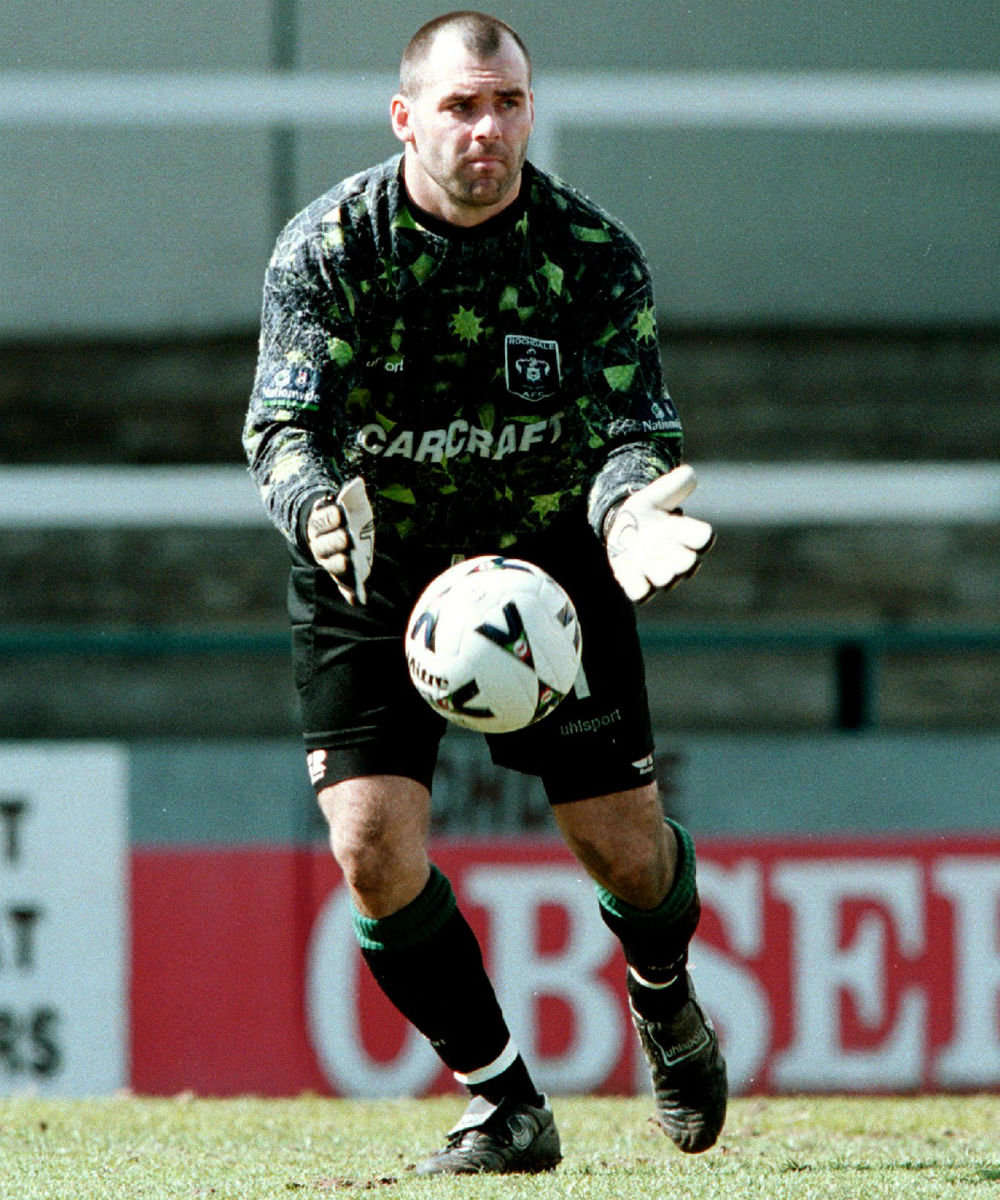 It’s a common mantra around Kirkby that Academy staff are just as proud of those players who make a career for themselves elsewhere as they are of those who make it into the Liverpool first team. And the former group could not ask for a better mentor than Edwards, who had the kind of rollicking, picaresque career in the lower leagues that warrants a dedicated piece to fit all in, beginning with that motorway journey back in 1991.

The young ‘keeper left Leeds United to join Stockport County, where his new boss was Danny Bergara, the Uruguayan who would later garner a measure of fame from featuring in the documentary They Think It’s All Rovers, centred on Doncaster Rovers’ infamously chaotic 1997-98 campaign. Those aforementioned four Wembley finals? County lost all four, two Autoglass Trophy finals and two play-off finals, but there were compensations…

“We drowned our sorrows, so the after-parties were good at least!” Edwards laughs. “I’ll be honest, when Stockport came in for me I didn’t even know where it was. Probably typical for a 19-year-old kid who hasn’t really been out in the big, wide world.

“That’s what I try to get through to young lads here when I give them advice; if you have a decision to make, have a long, hard think to make sure it’s the right one, but once you’ve made your choice, don’t look back. It was worlds apart from Leeds but Danny was a lovely fella, so enthusiastic, and that three or four-year period put Stockport on the map a bit.”

Bergara passed away in 2007 and Stockport now play in the National League, while Edwards’ playing career carried him around Greater Manchester, from Stockport to Rochdale on to Bury, before his retirement in 2006. 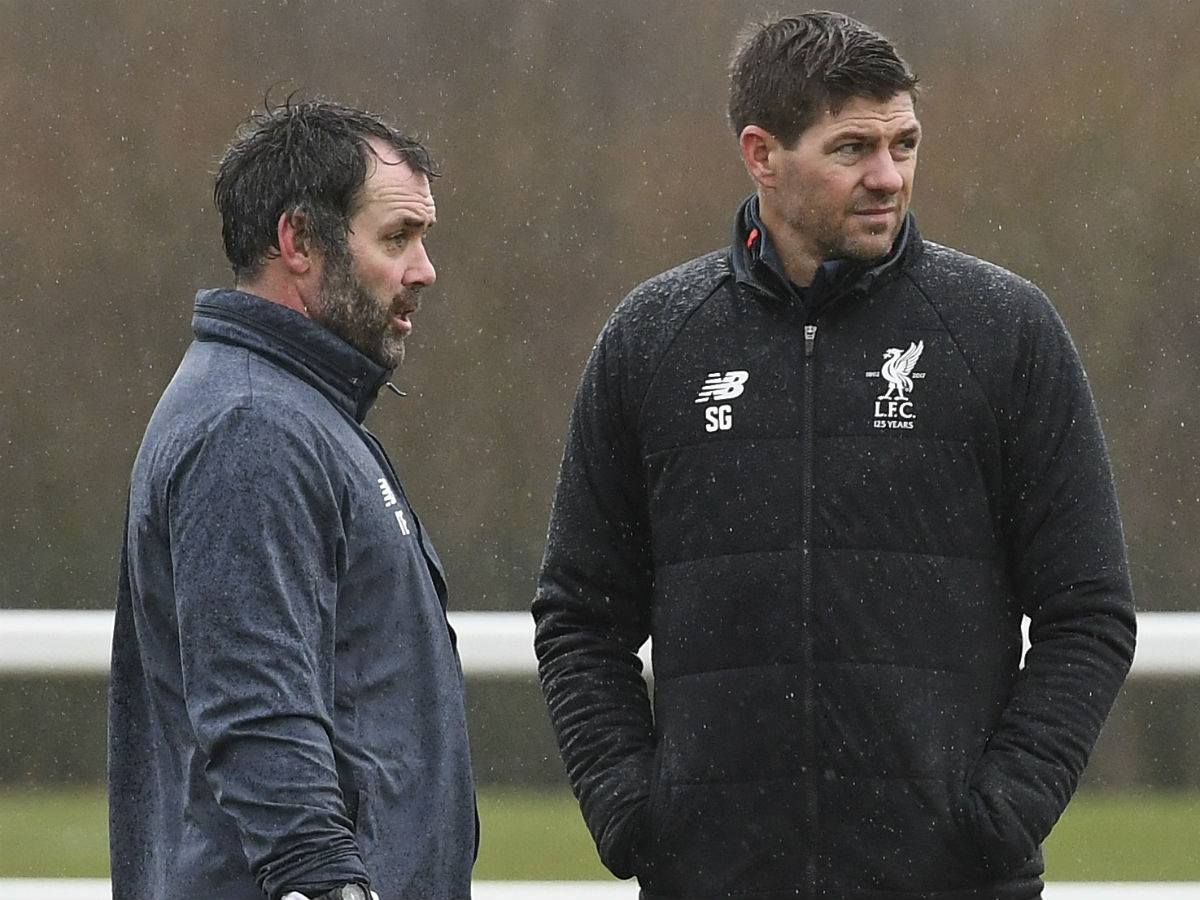 His transition into coaching was far from a fait accompli, indeed it was something the Welshman had barely given a thought to, but Fred Barber - a close friend and former goalkeeping coach during those days at Stockport - arranged for Edwards to do some part-time sessions with Carlisle United and Northwich Victoria, and within a year he was full-time at Bolton.

“The more the years went on and I was still involved with Fred, I started to think maybe it was for me,” the 49-year-old reflects.

“But at the end of the day, you still rely on someone giving you a job, and once you’re in that job you have to prove you can stay there. To this day I’m still in touch with Fred, because he’s a massive part of that. You’ve got to prove yourself, and I like to think, with all the learning I’ve done along the way, I have. But obviously I’m still learning, and I’m very grateful.” 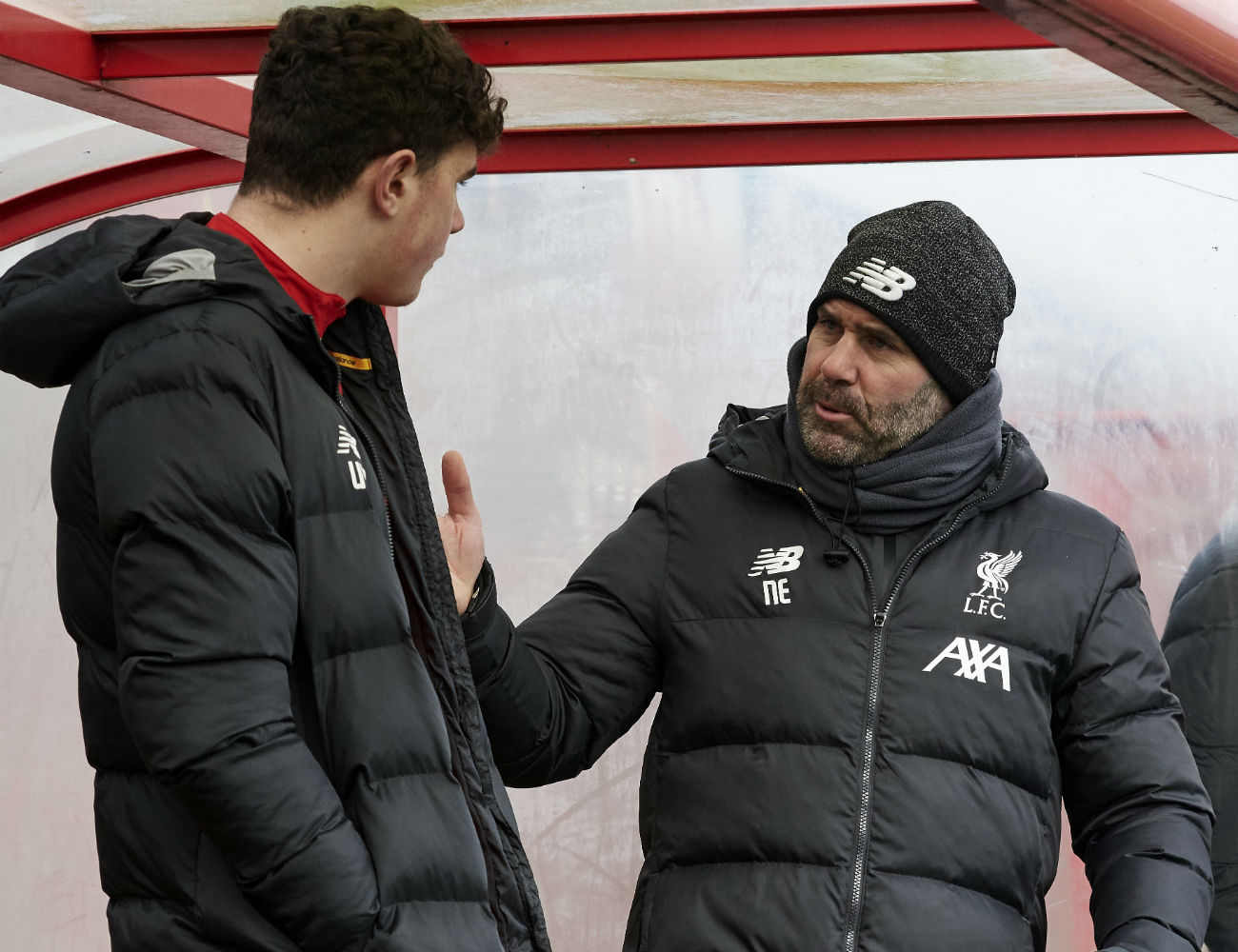 For now ‘Taff’ is striving to help Liverpool U18s maintain those high standards of the last few seasons and to mould the likes of ‘Kuba’ and Kelly into potential first-teamers, but he has another, simpler objective in mind before that: letting everyone know what his real name is.

“Through the first half of my career my nickname at Leeds was ‘Chunky’, and once I got into playing professionally it became ‘Taff’. It’s amazing the amount of people that don’t actually know me as Neil Edwards!

“I’ve even had members of staff that I work with, when we’re going away on pre-season trips, asking who Neil Edwards is, thinking it was a new club doctor! I was just sat behind the fella giggling.”