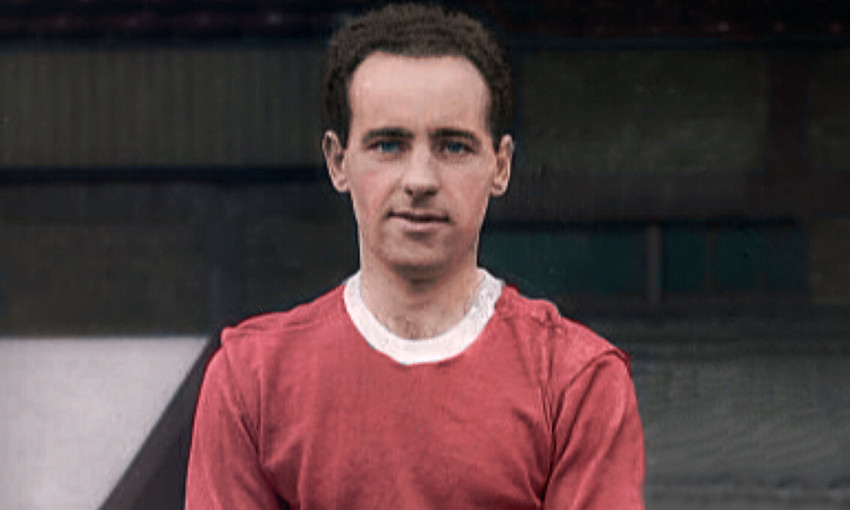 Our latest feature from the Liverpoolfc.com archives is an article from 2005 that explains why one former Red was often attributed two different surnames.

We caught up with Stan Palk, who sadly passed away four years after providing this interview, to put the confusion to bed and reflect on an intriguing career with the club.

Read an abridged version of the original story below…

During an eight-year Anfield career he rubbed shoulders with some of the greatest names in Liverpool history, played in a title-winning team and scored in a derby victory over Everton.

Yet the name Stan Palk is conspicuous by its absence in the majority of books that have been published about this club.

It’s not that his achievements have been overlooked. Stan is correctly credited with having made 13 first-team appearances for the Reds between February 1947 and March 1948.

Confusion over the spelling of his surname means his place in Liverpool history is etched under an incorrect surname and he’s referred to in most statistical records as Stan Polk, not Palk.

“On the day I signed I had to produce it and must have shown them the wrong one. The name Palk is Cornish and is actually pronounced with an ‘O’, so I can understand how the confusion has come about. It’s never bothered me or the family, though.”

By his own admission Palk was hardly a household name during the course of his career and the majority of fans reading this will probably be asking ‘Stan who?’

Like them, he was a born and bred Liverpudlian but one who went on to achieve his dream of actually playing for the Reds.

It was while plying his trade for South Liverpool in 1940 that the inside-left was invited to train at Anfield by the then-manager George Kay.

“One of my teammates at South [Liverpool] worked for one of the Liverpool directors, Mr Martindale, and he put a word in for me,” he recalls.

“One day I was in the factory where I worked at the time and in walked George Kay. He introduced himself and invited me to go training with Liverpool. I eventually signed and my first wage was about £1.50 a week. That was during the war, in peacetime it went up to about two quid!”

Palk made his debut in May 1940 alongside such revered Anfield names as Bob Paisley and Billy Liddell. Berry Nieuwenhuys scored a hat-trick in a 4-3 home win over Stockport County and just 6,000 fans witnessed it.

The following year he netted his first Liverpool goal in a 2-0 defeat of Bury. In total Palk scored 14 goals in 62 wartime appearances but missed out on the Reds’ Football League North title triumph of 1942-43.

In April 1944, though, he experienced the joy of contributing to a Merseyside derby victory over the Blues.

“I scored in that game and it was probably my most memorable,” Palk remembers. “The game was a Liverpool Senior Cup tie and George Burnett, who went to the same school as me as a kid, was in goal for them. I remember putting it right across his body. We won 4-2 and there must have been a crowd of around 25 to 30,000.”

That was shortly before he was called up by the Navy and shipped off to Mombasa for two years. On returning to these shores in 1946 Stan immediately reported back to Anfield and pledged his support to Liverpool’s inaugural post-war title bid.

Six years after signing on for the Reds he made his first Football League start in a 5-0 rout of Grimsby at Anfield and made a further five appearances as Kay’s side upset the odds to pip Wolves, Manchester United and Stoke to the championship.

“That was certainly a good team alright but it was only towards the end of the season that they made their charge for the title. I only played a few times before getting injured, but they then went on this run that ended with us winning the league. It was a real achievement because it was a really strong division back then.

“I don’t recall the celebrations being anything special and I don’t remember us getting any special bonus or whatever. We used to get a turkey at Christmas, though!”

That 1946-47 championship-winning team is still regarded by older fans as one of the finest in Liverpool history and Palk considers it an honour to have been part of it.

“I was fortunate to play alongside some great players, the likes of Albert Stubbins and Billy Liddell. Billy was probably the star man at the time. He was a nice lad, strong and a good runner. Once he got the ball he was away. He could also play on the right or the left.

“Bob Paisley was another one. I used to be inside-left and Paisley was behind me. Out of them all, though, I’d say the best player was Phil Taylor. He couldn’t half pass a ball could Phil.”

Manager Kay was another individual Palk had a lot of time for and he adds: “The manager, George Kay, wasn’t a bad fella either. You’d never hear him cursing and swearing. He was the type of manager you could talk to and I got along fine with him.”

Life at Liverpool back in the 1940s was certainly a lot different than it is today and Palk can still recall vividly how the Reds would prepare for games back then.

“Most of our training was done on the pitch at Anfield, that’s why there was never any grass on it by Christmas,” he says. “During the winter months when the pitch was covered in snow or the rain was falling heavily we used to run up and down the steps of the Kop.

“Albert Shelley and Jimmy Seddon were the trainers back then. We’d train every morning between 10 and 12 o'clock, unless you’d played on the Saturday. In that case you’d have the Monday off. And there was none of this warming up on the pitch before a match like they do nowadays. We’d just run out for the kick-off and get on with it!

“Talking about Anfield, that has also changed so much since my days as a player. It was mostly standing back then and held about 60-odd thousand. The atmosphere was great and it was a privilege to play in front of such knowledgeable fans.”

Palk’s fortunes following the memorable post-war campaign mirrored that of the team. While Liverpool struggled to rediscover the form that had saw them crowned champions, he faded from the first-team scene after making what was to be the last of his 13 competitive first-team appearances in March 1948.

That summer he was a member of the squad that toured the USA and Canada for a second time but the end of his Reds career was nigh.

“I’d just come back from the States and I got the shock of my life. Tom Bush, a former centre-half who was then working on the office staff, knocked on my door and said I was wanted down at the ground. I turned up and standing there was Gordon Hodgson, the legendary Liverpool centre-forward who managed Port Vale. He wanted to sign Mick Hulligan and myself in a double deal.

“I was unsure what to do at first because I really wanted to stay with Liverpool but the opportunity of first-team football was too tempting and I eventually decided to go.”

Palk went onto to skipper Port Vale and spent four years in the Potteries before embarking on a nomadic spell on the non-league circuit, where he turned out for Worcester City, Northwich Victoria, Prescot Cables, Pwllheli, Flint Town United, Oswestry Town and finally Maghull.