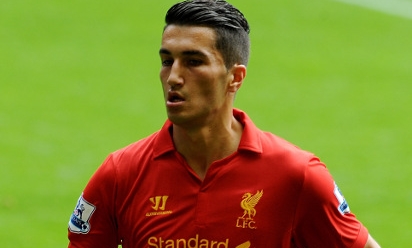 Rodgers: We will improve

Brendan Rodgers believes Nuri Sahin displayed glimpses of why he'll establish himself as an important part of the Liverpool squad this season in his debut against Arsenal on Sunday.

The Turkey midfielder made his first appearance for the Reds since signing from Real Madrid on a season-long loan last week, and turned in a solid performance in the 2-0 defeat to the Gunners.

Sahin was replaced by Jonjo Shelvey after 67 minutes, but Rodgers feels he witnessed enough from the 23-year-old to suggest he'll have a key role to play in his plans.

The boss told Liverpoolfc.com: "He hasn't played a lot, Nuri, so to get 65 minutes was good for him. He showed he is an accomplished footballer and that he'll be able to fit in really well into our style.

"He's a good guy and as he gets fitter and stronger he'll become better."

Naturally, Rodgers was left disappointed by Liverpool's loss against Arsenal as goals from Lukas Podolski and Santi Cazorla secured the points for Arsene Wenger's side.

Nonetheless, the manager could not fault the efforts of his players, who toiled until the final whistle in an attempt to salvage something from the contest.

He said: "For a lot of them, that was their third game [in a week] - three tough games in Manchester City last week, Hearts and then this game.

"They'd put everything into it and I can't ask anymore from them.

"In spells of the game, we played ever so well, maybe never took our chances when we had the opportunities and obviously we then suffered by conceding two disappointing goals from our point."

Rodgers added: "We need to keep the ball better. For me, it's a crime when you keep losing the ball and that was unfortunately something we did, particularly in the second half.

"We always have to improve and it's going to be important technically that we keep the ball because if you don't then it can cause you a problem."