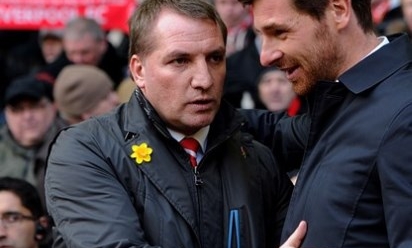 Brendan Rodgers believes the victory over Tottenham is a 'marker' of how far Liverpool have progressed since the start of the season.

The Reds climbed to within seven points of the top four, leapfrogging Everton in the process, with a 3-2 victory over a Tottenham side who came to Merseyside with a 12-game unbeaten record.

Steven Gerrard won the game from the penalty spot after goals from Luis Suarez and Stewart Downing.

Rodgers reflected: "It's a very important win for us. We're on a great run at the moment and we knew it was going to be a severe test of our qualities and our character against a team in great form who are particularly strong and have been together for a few years.

"For us to get the three points and play like we did, and more importantly show the character, was fantastic.

"All season people have spoken about us not beating anyone from the top 10, then it was the top eight and top six and top four. Today was a stringent test and they came through it.

"We know where we want to be eventually but this is another marker for us in terms of our growth."

Liverpool are now sixth - but Rodgers insists he isn't looking at the table.

"I am not thinking of that [qualification for Europe]. We know where we want to be, challenging at the top end, but we're in the business end now, the period where hopefully we can establish that it's the time to win and really narrow our focus in games. That's what we've been doing.

"We'll just keep collecting points and see where it takes us."

The Reds have scored 15 goals in recording four straight wins, three of which have been on home soil.

Asked if Anfield was becoming a fortress again, Rodgers replied: "The intention when I came here was to grow and cultivate that here. It was a difficult place to come for many years. That wasn't going to happen automatically but you see now that we're scoring goals.

"In some of the other games in this little run, it's always been that the other team hasn't played well or different circumstances - the players didn't quite get the credit for how they were performing. Today was a stringent test and they came through it.

"You saw the passion of the supporters today. I think they sense it's coming on well and it's growing. That's what we want this place to be.

"It's an iconic stadium in football history and we're trying to return it to that. You do that by winning games."

Spurs came from 1-0 behind to lead 2-1 at Anfield with two goals from Jan Vertonghen.

"We're disappointed with the two goals, in particular the first one," said the boss. "The referee allowed Gareth Bale to come on when he was off the pitch. In the modern game, the player can come on the pitch when the ball is on the other side. But he actually came on when the ball was on his side and he ended up being the spare man and got the cross in for the goal.

"The second one was harsh - if you give that you'll give about 200 free-kicks a game."

Meanwhile, Rodgers was asked if Suarez's continued brilliance made it difficult to prevent bids coming in for him.

"Everyone is seeing how good he is but he is happy," said the Northern Irishman. "Luis is very happy amongst his mates here and happy with the way of football.

"You saw today, it doesn't matter where he plays, at times he was in the No.10 role, and then when I made the change to get the three midfielders on, he came in off the side and caused havoc.

"He's an outstanding talent, a pleasure to work with, and he knows the trust I have in him, and that gives him the platform to go play and perform."