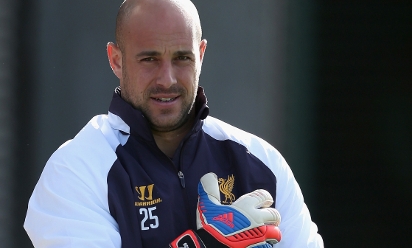 Brendan Rodgers is hopeful that Pepe Reina will be fit to face Southampton next week.

The Spanish custodian missed our 3-2 victory over Tottenham on Sunday with a calf problem.

Brad Jones deputised as the Reds climbed to sixth in the Barclays Premier League.

Rodgers said: "It was disappointing because we thought he would probably make it today.

"He had a tight calf in a fitness test this morning and unfortunately for him he didn't get through it. Hopefully by next week he'll be fine.

"Big credit to Brad Jones, who came in at the last minute. He equipped himself terrifically today and made a great stop, especially in the first half.

"We'll see how Pepe is next week."

Rodgers confirmed before Sunday's win that Joe Allen would require surgery on his shoulder, though the problem has not kept him from playing.