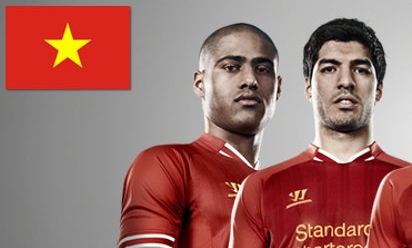 Bournemouth next for Reds in FA Cup

Liverpool FC has today taken another step forward in its goal to connect millions of fans around the world by launching a new official Vietnamese Facebook page.

The Reds enjoy enormous popularity in South East Asia, but before now have never interacted with fans in Vietnamese online. That changes today with the launch of the new official LFC page on the world's biggest social media platform.

Paul Rogers, head of international digital development at Liverpool FC, believes today's announcement is further testament to the club's ongoing commitment to delivering engaging content to fans no matter where in the world they live.

"Just over 12 months ago, we embarked on a journey to address an issue that meant language was proving a barrier to following the club online for many of our supporters for whom English was not a first language," said Rogers.

"Despite being a club with a unique global appeal, the fact that we only communicated with fans in English and Chinese neglected the needs of millions of our supporters.

"With a lot of hard work around the world, we've addressed that issue over the last year and now communicate online with fans in 16 different languages every single day of the week and we have further local-language launches planned for 2014.

"We've yet to play in Vietnam - something that will hopefully change in the coming years - but we're extremely proud of the fact that the country is home to a very large and passionate Liverpool fan base and today's official launch will allow us to begin engaging daily with over 150,000 Vietnamese supporters for the first time."

For the Vietnamese fans themselves, today's news is just reward for a lifetime of supporting the club from afar.

"With this local Facebook page, Liverpool fans in Vietnam can now follow news about our beloved team more easily and conveniently. It also gives Vietnamese fans, who are desperate to see our heroes in the flesh, the feeling that we are much closer to the club and the players.

"In the past, those of us who can speak English, have relied on the official LFC website for news but unfortunately not all of the content is able to be enjoyed or understood by our supporters.

"To now be able to receive official news that Vietnamese fans can enjoy in our mother tongue is a huge thing for us and will help us to support the club even more.

"Liverpool FC is one of the clubs that has the greatest number of supporters in Vietnam. Our supporters here are very passionate and many LFC activities and charity events are regularly organised in many cities around the country.

"Hopefully this new Facebook page will showcase just how passionate we are over here in Vietnam."