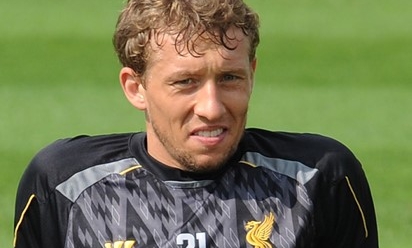 Liverpool midfielder Lucas Leiva expects the 'small details' to prove the deciding factor when the Reds search for a first victory at rivals Manchester United since 2009 this weekend.

The Brazilian was a member of the team that last departed Old Trafford with three points, playing every minute of the unforgettable 4-1 triumph midway through March of that year.

Indeed, the enforcer has lined up in opposition to the Red Devils on nine separate occasions, and therefore has an inside track on what can make the difference in matches of such magnitude.

Lucas explained to Liverpoolfc.com: "It's just the small details. We know we will have a chance to score and if we take most of them, then for sure we will have a bigger chance to win the game.

"But also, defensively, we have to make sure we are solid, especially in the away games - because it's always hard, but especially against Manchester United.

"We know if we give them a chance they will punish us because they have quality players.

"That's why in the last few games the team has shown a real mental strength and really good character, especially in the away games, to go and get results.

"It's a game that you forget where the teams are in the league and you just think like it's a final. We know what it represents to each club to win these games, so that's why we have to approach it just the same way as we have done through the whole season and try to get a result."

Many neutral observers would consider Brendan Rodgers' charges to be favourites for the encounter on Sunday, with the travellers leading their hosts by 11 points in the Barclays Premier League.

In contrast, Lucas describes the clash as '50-50' - although the No.21 notes a combination of confidence and experience within the squad as swinging in the Reds' favour.

He said: "The season we are having and the way Manchester United are doing this season, they probably put us as the favourites but we know it's a very big game.

"They have a lot of big players so it's going to be 50-50, to be honest. Of course, playing at home you always have an advantage.

"But I think we have shown during the season that we can beat any team and we already beat them at Anfield at the beginning of the season.

"So hopefully if we keep the same way we have been playing during the past months, then we will have a big chance to win, and of course we know how much of a threat we are to score goals.

"We have an experienced squad; a few older players who have that experience and have been there on this occasion many times. We have already shown that every game is important and we can't get carried away.

"We know if we lose one game then it can change a lot of things, so we just have to approach it the same way as we have been doing the whole season. We are getting towards the end of the season in really good shape."

A knee injury suffered during the home win over Aston Villa in January left Lucas on the sidelines for emphatic and memorable victories over neighbours Everton and close challengers Arsenal.

With a run-out for the U21s safely behind him last Friday, the 27-year-old is now determined to provide a contribution as the campaign enters an all-important final stretch of 10 games.

He concluded: "I'm back and I know the team is doing very well and everyone is fit apart from Jose Enrique, so it's a good time to have everyone back.

"We are giving the manager options and I will work as hard as always to get games because I know it's going to be important for me to play games, especially looking to the summer and the World Cup.

"We have had a very good week to prepare ourselves for the game and get ready, because we have another block of really important games.

"We have two away games and then two home games - probably the next four games will tell us about the top four positions and we just have to keep the same way."