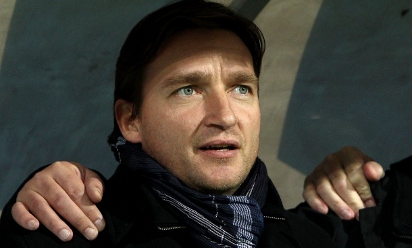 Vladimir Smicer admits he can't wait for his opportunity to step out onto the Anfield turf for the first time in nine years when he heads back to Liverpool for the 'Celebration of the 96' charity match next month.

The ex-Reds forward last walked out at the stadium in a Champions League quarter-final clash with Juventus in April 2005 en route to helping them lift the trophy in the unforgettable final against AC Milan in Istanbul.

"I am really looking forward to going back for the Hillsborough game," Smicer told the Liverpool Echo.

"When I finished playing for Liverpool I never really had the chance to say goodbye to the fans at Anfield.

"I didn't play in the last home game that season against Aston Villa before the Champions League final and that was a disappointment.

"I've been back to Anfield twice since I left to watch a game there but I haven't stepped foot on to the pitch.

"I was at Bordeaux when they played Liverpool in the Champions League in 2006 but I wasn't able to play due to a knee injury.

"Anfield is such a special place and now I will finally get the chance to play there again."

Smicer arrived at Anfield from Lens in the summer of 1999.

In a total of 184 appearances, he helped Liverpool to multiple successes, including the unprecedented cup treble of 2001 and, of course, the 2005 Champions League.

"I have so many great memories of my time at Liverpool," continued the 40-year-old.

"I won all my big trophies with Liverpool. I made a lot of friends and I played with great players. It was everything you could ask for.

"I will always remember my time there. The only disappointment was that we weren't able to win the Premier League title. We won everything else.

"I had a lot of injuries and I wasn't always able to show the fans my best but for it to finish the way it did by winning the Champions League was fantastic. That was the highlight.

"Like all the players, the fans and the staff who were there that night, I'm glad to be able to say I was a part of it."

The No.11 struck a crucial second goal as Liverpool came from 3-0 down at half-time to draw level with AC Milan at the Ataturk Stadium and take the contest to penalties.

He then netted a decisive penalty in the shoot out as the Reds clinched the iconic trophy for a fifth time.

It was his final appearance in a Liverpool jersey and Smicer celebrated by puffing on a large cigar into the small hours of Thursday, May 26.

"That wasn't the best goal I scored in my career but it was certainly the most important," he reflected.

"When Steven Gerrard scored his header, it was about giving our 40,000 fans there something to cheer.

"When I scored, I think we all started to believe it could happen. To score a goal like that in such a big game is something you always cherish.

"It's true I enjoyed a big cigar afterwards - I always did after winning a trophy.

"I wasn't finished when I left Liverpool as I played for another four years. I won the league with Bordeaux and then with my old club Slavia Prague too so there were more cigars!

"If I was smoking a cigar then it was good times because my team must have won something."

Tickets for the 'Celebration of the 96' charity match are on sale now. For full details and the chance to buy, click here.