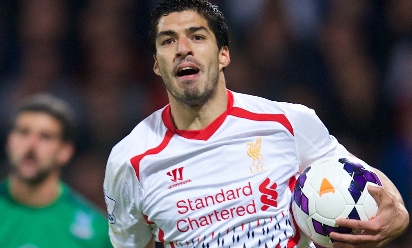 Callaghan: Pressure is on Manchester City

John Aldridge refused to be too downhearted after watching the Reds surrender a seemingly impenetrable three-goal lead to draw 3-3 with Crystal Palace at Selhurst Park on Monday night.

The Eagles' fightback, which saw the home side strike three times in the space of nine minutes, stunned Liverpool late on and rendered players, staff and supporters shell-shocked at the final whistle.

Brendan Rodgers' side looked to have built an unassailable lead, particularly when Daniel Sturridge and Luis Suarez netted back-to-back goals in the space of two minutes to add to Joe Allen's opener.

However, Palace fired a warning when Damien Delaney's effort deflected beyond Simon Mignolet in the 79th minute, before Dwight Gayle struck between the lines twice to clinch a point.

Aldridge watched the dramatic scenes unfold from LFC TV's studio - and while he was stunned by the game's outcome, he insisted Liverpool should still take immense pride in their achievements so far this season.

"When Crystal Palace got their first goal, you could sense all of a sudden that they were revitalised," said Aldridge. "We had a lot of tired legs at the time. A lot of the lads had put plenty of effort into the game.

"But we've scored 99 goals this season, which is incredible. We seem to have been celebrating weekend after weekend. We've taken apart top teams and the feel-good factor has been put back into the city, into the club and into the fans.

"Let's not forget that when we have beaten all these top sides, we've been able to come away and think, 'how good was that?' We won 11 games on the bounce - it's been fantastic. It's just a pity that it seems to have deteriorated a little over the last 10 days or so."

Despite dropping points at Selhurst Park, Liverpool remain top of the Barclays Premier League table; however, Manchester City are lurking just one point behind, with a game in hand.

Manuel Pellegrini's men host Aston Villa and then West Ham United in their final two games of the season, and while Aldridge admits City are firm favourites to go on and win both games, he's not ruling out a further twist in the tale.

"Anything can happen in football," said the 55-year-old. "We saw against Palace what can happen and I've seen it many times over my career - things happen when you least expect them to. So we'll just have to wait and see."