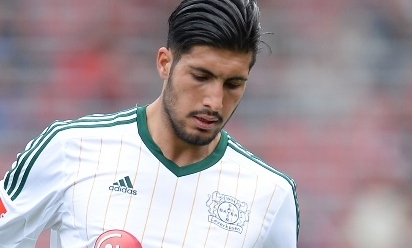 In profile: The rising talents of Emre Can

Liverpool have today agreed a deal in principle with Bayer Leverkusen for German midfielder Emre Can, subject to documentation being completed. Here are 10 facts on the young star...

The 20-year-old has represented Germany at every level from U15 to U21. He was born in Frankfurt, but is of Turkish decent.

Can netted a superb solo goal against Mexico in the semi-final of the FIFA U17 World Cup. He received the ball with three markers closing in on him, skipped past one and paced forward before escaping two other opponents and evading the goalkeeper. Germany were defeated 3-2, but the dynamic midfielder also set up his side's opener.

Touted as the future of German football, Can began his youth career at SV Blau-Gelb Frankfurt before moving to Eintracht Frankfurt. In 2009, Bayern Munich recognised his gifts and secured his signature. In August 2013, with Pep Guardiola having 10 international midfielders at his disposal, the gifted player signed a four-year deal with Bayer Leverkusen in order to ensure first-team football.

"Emre Can is one of the biggest talents in German football," said Bayern chairman Karl-Heinz Rummenigge at the time. "With this step, we want to make sure he gets enough playing practice, for example like Toni Kroos had at Leverkusen, Philipp Lahm at Stuttgart or David Alaba at Hoffenheim."

When he sealed his switch to Leverkusen, Can played under the tutelage of Liverpool legend Sami Hyypia.

While he prefers to play in central midfield, either in an attacking or defensive capacity, Can has also been deployed out wide on the left, where he loves attacking the full-back. He has also been utilised at centre-back and left-back.

He made his Champions League debut against Manchester United at Old Trafford in September 2013. Leverkusen were defeated 4-2 in that encounter.

Can is often compared to Germany midfielder Bastian Schweinsteiger, due to his ability to switch from attack to defence with ease. He also boasts a powerful shot and can comfortably dictate the tempo of a game. His powerful forays forward have also drawn comparisons to Toni Kroos.