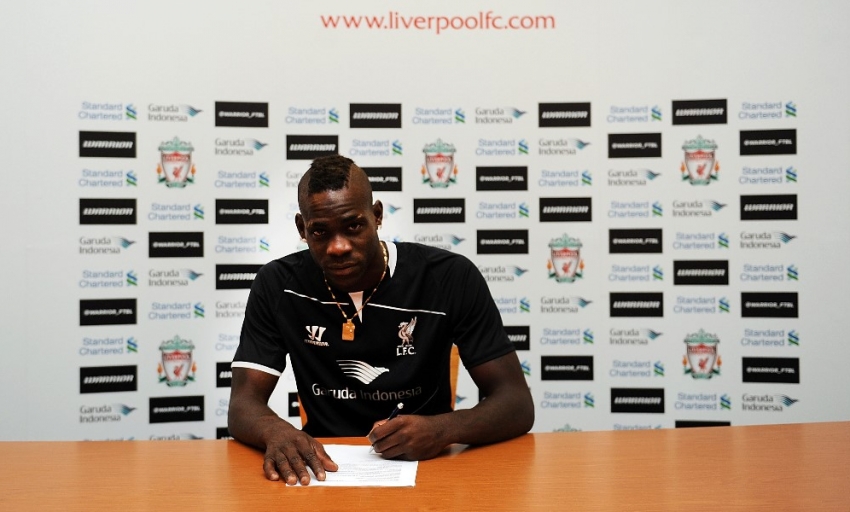 Italy international striker Mario Balotelli today completed a switch to Liverpool, subject to registration, to become the club's ninth new signing of the summer – here are 10 fascinating facts about the talented 24-year-old…

Mario Barwuah Balotelli was born on August 12, 1990 in Palermo to Ghanaian parents. However, health issues involving intestinal surgery as a child meant he was soon placed into foster care. At the age of three, he moved to Brescia in northern Italy, where he was raised by the Balotelli family: father Francesco, mother Silvia, brothers Corrado and Giovanni, and sister Cristina. "Brescia is my home," he explained. "It's where I will live one day when I stop playing football. When I'm in Brescia, I'm relaxed."

Mario's fledgling steps towards a life in football began as a toddler. From five years of age, he was formulating his technical abilities for a local parish team, and in 2001 the striker was snapped up by AC Lumezzane. The club were prepared to hand a then 15-year-old Balotelli his senior debut in April 2006, as they faced Padova, and received special dispensation from the Italian league authority to do so. Liverpool are therefore the fifth club in Mario's career, following spells with Lumezzane, Inter Milan, Manchester City and AC Milan.

Had events taken a different path, Mario could have become a Barcelona player earlier in his career. The striker was invited for a trial at the Spanish giants' home, the Nou Camp, eight years ago and showed significant evidence of his prodigious talent. During a five-day stay, he clocked up eight goals, prompting negotiations with the youngster's representatives about a possible move. However, issues related to Mario's Italian citizenship forced such talks to break down and instead, soon after, it was Inter Milan who secured his services.

The man nicknamed 'Super Mario' is hugely active on social media platforms - in addition to an official personal website, Balotelli keeps his fans updated with regular posts on Facebook, Instagram and Twitter. Tweeting under the username @FinallyMario, the Italian can boast 2.83million followers, with one particular famous offering during the World Cup in the summer receiving more than 175,000 retweets. If Instagram is your preference, Mario is there too - 1.3million fans are already enjoying pictures and videos from the man himself, known as @mb459 on that platform. The Reds' latest recruit is on Facebook too; click here to join more than 9million others in liking Balotelli's official page.

Still just 24, Mario has lifted no fewer than seven major honours in club football, including the Champions League, Premier League, FA Cup, three Serie A titles and the Italian Cup. His roll of honour was kick-started by the Italian championship in 2007-08, with three goals contributing to Inter claiming the trophy by three points. As the gifted attacker matured, he evolved into an increasingly regular member of the Nerazzurri set-up and their prize was successfully defended in each of the two seasons that followed. Under the guidance of Jose Mourinho, that particular Inter team peaked in 2009-10 by scooping an incredible treble of the Coppa Italia and Champions League to add to their championship triumph. Two further prizes were hoisted aloft after Mario arrived at the Etihad Stadium. He played the entire 90 minutes as City scooped the FA Cup by beating Stoke City 1-0 at Wembley in May 2011, and provided 13 goals in 23 appearances as the Blues edged out rivals Manchester United on goal difference to win the Premier League a year later.

The striker has not been short of success on the international stage either, with 33 caps and 13 goals for Italy on his CV since making his bow for the four-time World Cup winners in August 2010. His inspirational displays were a driving force behind his country reaching the final of Euro 2012, not least because of his match-deciding double in the semi-final against Germany that rightly stole the headlines for its stunning efficiency. There was disappointment to come, though, as the showpiece was lost to a rampant Spain. Nevertheless, Balotelli was again a talisman in qualifying for the 2014 World Cup - scoring five times - to help Italy reach Brazil. Once there, it was Mario's second-half effort that downed England in Italy's group stage opener. But it was to prove the high point of their tournament, as consecutive defeats by Costa Rica and Uruguay forced elimination.

Balotelli departed Italian heavyweights AC Milan with a remarkable goalscoring record in Italian football and the Champions League. The forward sealed a transfer to the Serie A club from Manchester City in January 2013 and wasted little time in stamping his prolific skills on the division. Just three days after the switch from England had been completed, he lined up for a debut against Udinese at the San Siro, requiring a mere 25 minutes to notch his maiden goal in the red and black. For good measure, it was Balotelli who stepped up to convert a penalty in the fourth minute of stoppage time that sealed his side's narrow 2-1 victory. His strikes would find the back of the net regularly throughout the 18 months that followed, totalling 30 in 54 appearances - better than one every two games - before he swapped Milan for Merseyside.

Eagle-eyed observers will have a well-founded prediction about the shirt number Mario is likely to select at Liverpool - No.45. It was the Italian's preferred choice at each of his previous three employers - Inter Milan, Manchester City and AC Milan - and the jersey is currently unused at Anfield.

Balotelli has already experienced the unique atmosphere and surroundings of Anfield three times in his career, all with Manchester City. A glance through the history books suggests he can anticipate happier times now that he has joined Liverpool, though. In April 2011, he featured for 67 minutes as a substitute in a 3-0 loss, then seven months later was sent off on the same ground in a 1-1 draw. Most recently, in August 2012, Mario clocked up an hour in a thrilling 2-2 draw between the Reds and City during Brendan Rodgers' opening months as Liverpool manager.

Mario shares a friendship with hip-hop superstar Drake which dates back to the Canadian rapper performing in Manchester two years ago. Since sharing a meal on that occasion, the pair have developed into close friends, regularly exchanging messages via social media, while Drake even name-dropped Balotelli in a track and claimed that the Italian international is the footballer most suited to trying a few rhymes. In return, the new Reds signing dedicated his winning strike against Mexico at the 2013 Confederations Cup to his pal from across the Atlantic.

Watch Balotelli at Anfield in style this season with our hospitality packages. Click here for details.

Fabio: Balotelli told me about Kop