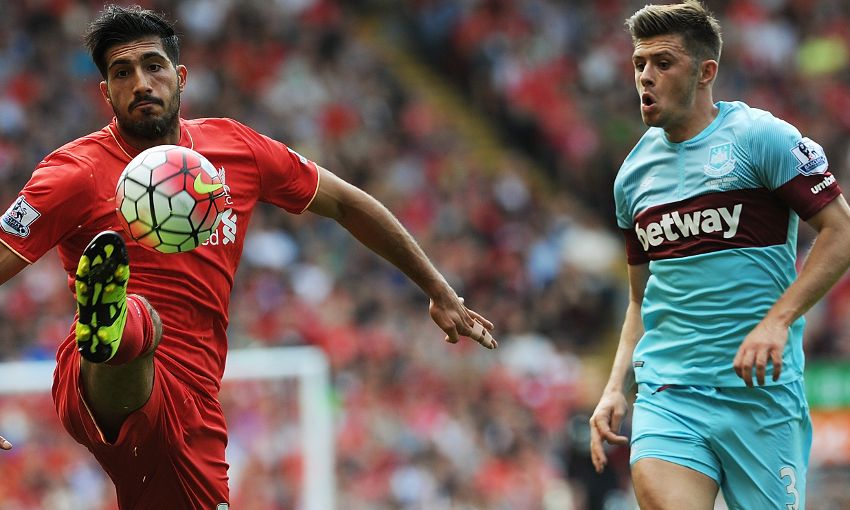 Liverpool's unbeaten start to the season was halted by a 3-0 defeat against West Ham United at Anfield on Saturday afternoon.

Manuel Lanzini pounced to put Slaven Bilic’s side ahead in the blink of an eye and, with the visitors in confident mood, the lead was doubled on 29 minutes by their captain, Mark Noble – who was later sent off.

The Reds’ hopes of recovering were dealt a significant blow when Philippe Coutinho was dismissed early in the second half and they could not find a way back into the game.

Diafra Sakho then compounded the day’s frustration for the hosts when he slotted into the near post in stoppage time.

Brendan Rodgers selected exactly the same team that performed impressively against Arsenal earlier this week, with no changes in the entire matchday squad.

A look at the statistics suggested a tough afternoon ahead of the Londoners given that they hadn’t departed Anfield with a win since September 1963.

The Reds had not conceded for 270 minutes from the start of the season either, but the Hammers required only three to shock the Kop and break that run.

Aaron Cresswell was afforded time to creep forward on the left and his delivery across the Liverpool area found Lanzini, who shrugged off the attentions of Joe Gomez to convert low into the net.

In the opening quarter-hour it was very much the West Ham that had emerged victorious from the Emirates on the first weekend than the side that had since lost successive matches at home.

Encouragement for Rodgers’ charges arrived in the form of an excellent shot, 25 yards out, by Roberto Firmino on nine minutes. The Brazilian spun on the ball in the middle, moved off Noble and struck – but his effort clipped the outside of the left post.

Lanzini, drifting dangerously from his starting position on the right flank, threatened again when he bounded through the middle and was presented with the chance to shoot. Wide this time, though.

The challenge facing Liverpool grew shortly before the half-hour mark.

A misjudgement by Dejan Lovren deep in his own territory let Lanzini grab the ball in space and his cross bobbled into the path of Noble. The midfielder’s side-foot finish into the bottom corner was unerring. 2-0.

The Reds needed to alter the momentum in the second half and the manager’s plan to make that happen began with the introduction of Alberto Moreno for Emre Can and a switch in shape.

It wasn’t long before the Spaniard executed a crucial sliding challenge to prevent Dimitri Payet from setting up a potential third with an incisive cross-field pass.

However, Liverpool’s frustration soon continued when Coutinho was shown a red card on 52 minutes.

The No.10 had collected a booking late in added time in the first half and was dismissed after picking up a second for a tackle on Payet.

Danny Ings was added to the mix for his first competitive Reds appearance and quickly set up James Milner, who was waiting at the edge of the box but dragged his attempt off target to the left.

The summer signing eagerly tried to reinvigorate his teammates and was unfortunate not to complete a one-two with Christian Benteke after laying the ball off and darting into the danger zone.

Cresswell was close to increasing the Hammers’ advantage when he dribbled into the Liverpool area and fired towards the near post. Simon Mignolet was alert to punch the hit away.

Winston Reid also flicked a header from a corner just wide, before Noble then received a red card himself for a lunging tackle on Ings with 11 minutes remaining.

But the levelling of numbers came too late for the Reds to reassert themselves in the contest and a response eluded them, while Sakho grabbed a third late on, meaning a first defeat of the campaign.