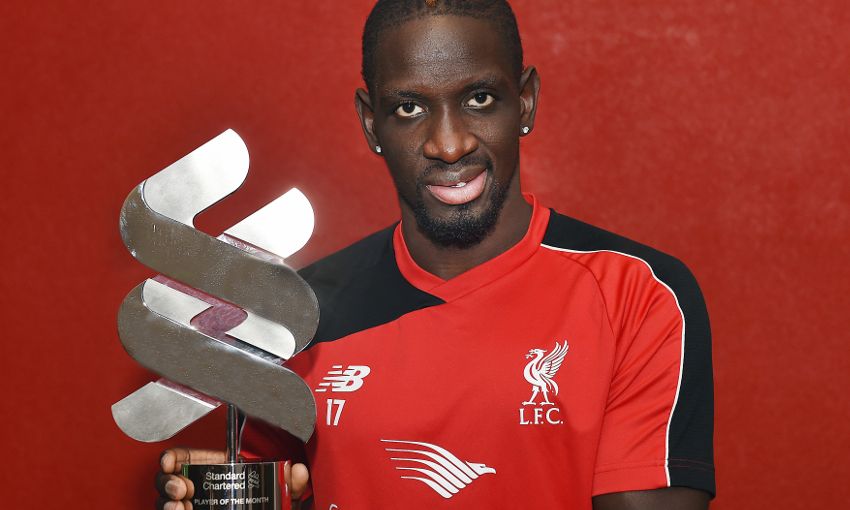 Mamadou Sakho pledged there's even more to come when he returns from injury after Liverpool fans voted the defender the Standard Chartered Player of the Month for October.

The France international started five of the team’s seven matches as the Reds navigated a busy period involving three different competitions without suffering a defeat.

Their best was saved until last too, with Chelsea beaten 3-1 at Stamford Bridge on the final day of the month to give Jürgen Klopp his first Barclays Premier League victory.

Sakho was a reliable and robust performer that day and throughout October as the powerful centre-back strengthened his status as a regular starter in defence.

Misfortune was to follow in the form of an injury earlier this month but the No.17 insisted he’ll be back stronger than ever upon collecting his prize at Melwood.

He told Liverpoolfc.com: “I feel very happy. I have to say thank you to all of the fans and thanks to all of the players, because [if I was] alone on the pitch I couldn’t do anything!

“Thanks to the people who work around me, my physio and my wife – who help me to play well. Thanks to my mum because she prays for me every day. Thanks to all.

“My message is that I’m very happy. Thank you for the votes for me. I have said before that this year I will try to show the real Sakho.

“I think I have shown a little bit but I hope for them and for me the best is coming. I will try to keep the same level and work hard to try to play better, because everyone can play better. I will try to give my best again.”

Despite bravely attempting to continue, an awkward landing during the clash with Crystal Palace at the beginning of November forced Sakho off and has left him on the sidelines since.

“I’m very disappointed because I wanted to give 100 per cent all the time for the team and the new manager,” he said.

“But it’s life – sometimes you have to accept what God decides for you. I stay calm and work hard to try to come back faster, to be ready for the team. That is my only thinking now.”