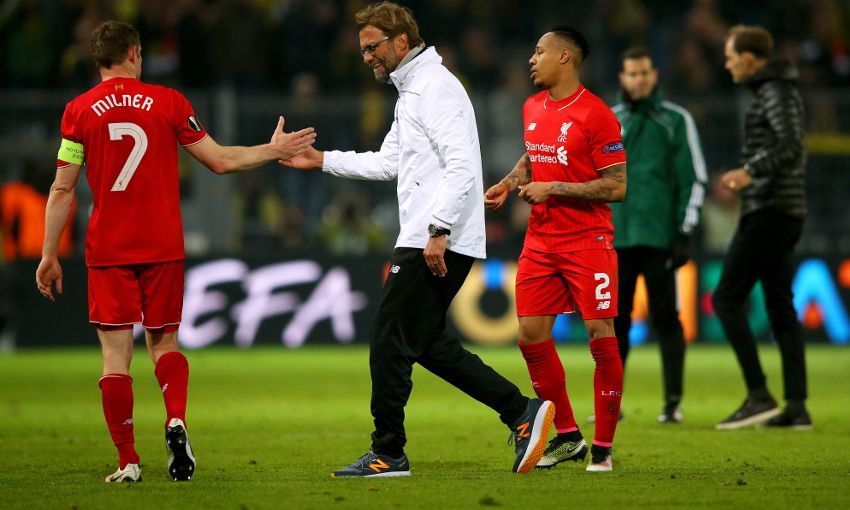 Liverpool v Stoke: Your guide to our live coverage

In our latest fan blog, Yemi Abiade argues that Thursday's showing against Borussia Dortmund should serve Liverpool well as they look to overcome Stoke City at Anfield in the Barclays Premier League.

Thursday’s Europa League quarter-final, first-leg tie against Borussia Dortmund was always going to be a tricky encounter for Liverpool, given the German side’s ability to overrun their opponents with incisive forward play from their abundance of talented players. Realistically, the Reds needed a goal to be competitive, and they produced a performance the fans can be proud of.

Gaining a 1-1 draw at Signal Iduna Park was a positive result against one of the best teams in the world, and it was by no means a fluke. Divock Origi paid back the faith Jürgen Klopp had in him with a superbly-taken finish, using his pace and physical strength to advance into the box, an asset the manager must have been hoping he would use to his advantage.

Across the park we matched Dortmund for organisation and work-rate, with our defence absolutely crucial to the result. With commands by Klopp to drop deep and soak up the advances of the home side, our centre-back pairing of Dejan Lovren and Mamadou Sakho were outstanding, intercepting final balls almost as if it was a routine.

Nullifying the threat of Pierre-Emerick Aubameyang also contributed to the result. Big performances were needed from Lovren and Sakho and they delivered, along with Nathaniel Clyne and Alberto Moreno, who were a constant threat down the right and left side of the pitch respectively. It was disappointing that not one player picked up Mats Hummels’ run for Dortmund’s equalising goal, but the defence was otherwise perfect.

The midfield, meanwhile, was able to blunt the sharpness of Henrikh Mkhitaryan and Marco Reus as we continued to soak the pressure and successfully repel Dortmund. Some may say the result places the tie in our advantage but with the Bundesliga outfit, the threat is very much still alive and similar performances will be needed for the return leg at Anfield next week.

It is worth noting that Liverpool have never lost a home game against a German team, which may place the match in our favour, but Klopp will not care for such statistics; sticking to the same formula of inviting pressure and later striking on the break will be crucial. Add a rocking Anfield come matchday and all of the seeds are sown for another amazing encounter.

Returning to the Premier League, Stoke City are the opponents this afternoon. The Potters are riding high in the table, just two points above us (although we have two games in hand) and they will be bringing their A-game to Anfield for our fourth encounter of the season. Klopp has the tactical options to seal a third win of the season against Mark Hughes’ men, while morale will be high after Thursday’s result and the players will want to continue in this impressive vein.

The display in Dortmund showed Liverpool can secure a result against one of the most lethal sides in the world right now, and that should give us the confidence to deliver another good performance in what will be a tough encounter today.

For more Liverpool fan views or to join the conversation, visit www.90min.com.

Liverpool 2-3 Atletico Madrid - how it happened at Anfield

Liverpool 5-1 Arsenal - how it unfolded at Anfield

Burnley 1-3 Liverpool: How it happened at Turf Moor

Liverpool 4-1 Cardiff City - how it unfolded