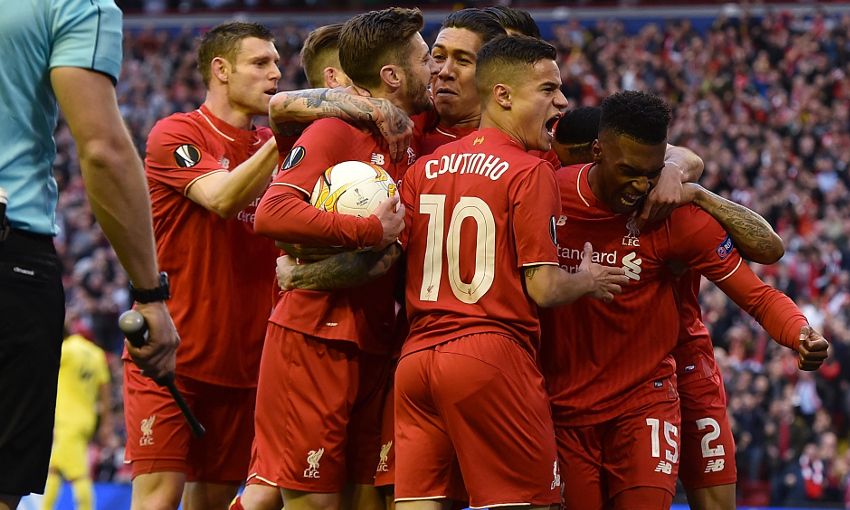 From Hunt to Gerrard: 10 great LFC wins over the Hornets

Liverpool will contest the 2015-16 Europa League final after another famous European night at Anfield saw them defeat Villarreal 3-0 (3-1 on aggregate) to book a trip to Basel later this month.

Backed by a typically vociferous home crowd, the Reds overturned the 1-0 deficit the Yellow Submarine carved out in Spain to secure a place in the 12th European final in the club's history.

The pressure told in the early moments, as Daniel Sturridge forced Bruno Soriano to turn into his own net at the Kop end, to bring the tie level on aggregate.

Liverpool continued their relentless approach in the second period, and sealed progression from the semi-finals with goals from Sturridge and Adam Lallana to cap a magnificent performance.

They will now face Sevilla in Switzerland after the Spaniards overcame Shakhtar Donetsk in their last-four clash.

As expected, Jürgen Klopp shuffled his pack with his side back in European action, making seven changes to the XI that started against Swansea City at the weekend.

Sturridge was one of few to retain his place as he was given the nod to lead the line, while Emre Can made a surprise return from injury to claim a spot in midfield.

With the Anfield crowd in sparkling form after a moving rendition of 'You'll Never Walk Alone' dedicated to the 96 victims of the Hillsborough disaster, the Reds had little choice but to make an authoritative start.

And they almost profited from Alphonse Areola's early spill before the goalkeeper recovered to claim a dangerous Sturridge cross as the hosts threatened.

Marcelino's men responded well to that pressure, with Mario Gaspar forcing a low save from Simon Mignolet after an intelligent knockdown from Roberto Soldado and Jonathan dos Santos firing over after the ball broke somewhat fortuitously to him.

Unfortunately for Villarreal, those chances only seemed to tease even more from Liverpool and their buoyant support and, shortly after, the hosts were ahead.

Can showed quick feet to work space before feeding Nathaniel Clyne on the right, and the full-back's low cross proved too hot to handle for the diving Areola.

Roberto Firmino was there to pick up the scraps for the Reds and his bouncing cross was subsequently turned home by Sturridge, courtesy of a helpful deflection off Bruno.

That lead was so nearly doubled in the mad scramble that followed, with James Milner firing in a sensational low pass for Lallana.

However, the No.20 could not make significant contact to turn the ball home for what would have been a great goal.

The captain created another fine chance with a whipped corner delivery soon after, but Tomas Pina was on hand to turn a flick-on behind to save Villarreal.

The half ended in somewhat ill-tempered circumstances with both Soldado and Clyne going into the book for 'enthusiastic' challenges, and there was still time for the visitors to carve out the last opportunity of a thrilling 45 minutes.

It fell to Cedric Bakambu, who rushed in behind to fire in an effort, but Mignolet was there again to foil the forward.

The Congolese was in again just seconds after the restart, meeting Soldado's clever header into the box, but Dejan Lovren produced a sensational sliding challenge to get the ball.

As had happened in the first half, the Reds quickly recovered, with Philippe Coutinho stinging Areola's palms from close range before Milner couldn't get enough power on a left-footer from the edge of the box.

The contest settled down after the initial rush of the second period, but Liverpool's patience only stretched as far as the hour mark.

It was at that point that a brilliant exchange between Sturridge and Lallana set the former away to bring a save from Areola after a stepover and a right-footed shot.

Klopp's team kept piling the pressure on after that chance, and were rewarded when the tireless Firmino kept the ball alive and saw a left-footed volley deflected into the path of Sturridge in the box.

The No.15 may have been somewhat fortunate to receive the ball in such circumstances, but there was nothing lucky about the typically ruthless low finish that followed.

With 20 minutes remaining, things went from bad to worse for Villarreal, as a poor challenge at the edge of the box from Victor Ruiz saw him pick up a second yellow card and his marching orders.

The Spaniards refused to give up, but their numerical disadvantage was always going to tell - and so it proved in the 81st minute.

Firmino did brilliantly to get past his man and to the byline in the box and, though Sturridge couldn't send the cutback home, Lallana was on hand with a fine improvised finish to get the job done.