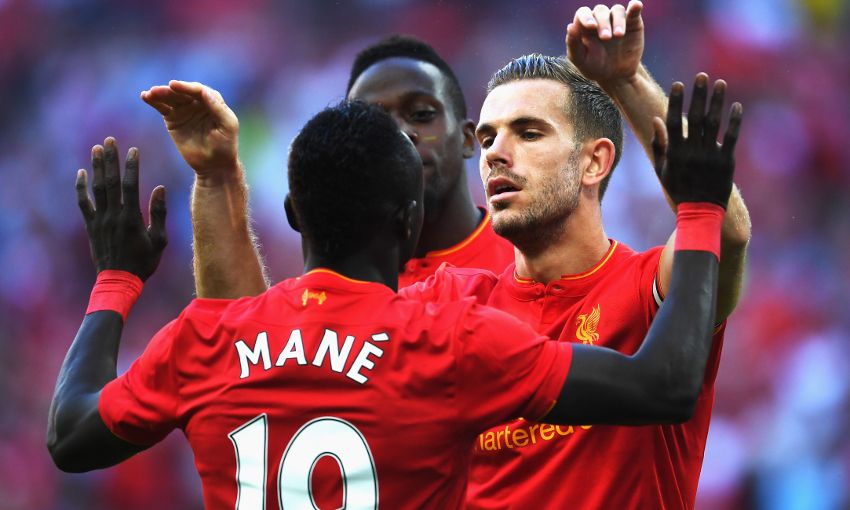 Sadio Mane's first goal for Liverpool set the Reds on their way to a comprehensive 4-0 win over Barcelona on Saturday evening.

Wembley Stadium was the setting as Liverpool completed their International Champions Cup commitments against the Spanish giants, and Jürgen Klopp’s team treated the sell-out crowd to an exciting, fluent display that whets the appetite nicely ahead of the new season.

The impressive Mane opened the scoring after a quarter of an hour with an excellent finish after Adam Lallana and Roberto Firmino had linked up well.

Luis Suarez reminded Reds fans of his stunning technique by producing a wonderful flick round the corner for Lionel Messi as Barca sought a quick response, but the Argentine hit the post with his low effort across Simon Mignolet.

Liverpool stormed out of the blocks in the second half and were 3-0 up by the 49th minute thanks to an own goal from former Red Javier Mascherano and a typically classy finish from Divock Origi.

Marko Grujic added further gloss to the scoreline with a brilliant looping header in injury time, and Klopp is sure to be satisfied with an encouraging performance and result against a true heavyweight of European football with Liverpool’s Premier League opener at Arsenal now just eight days away.

The only negative on an otherwise perfect day were apparent injuries for James Milner and Dejan Lovren, who were forced off towards the end of either half.

The Reds began the game on the front foot and Sergio Busquets had to be alert to deflect an early Georginio Wijnaldum attempt wide after Mane had sped to the byline down the right.

But the Reds did not have to wait long to take the lead as Mane rounded off an excellent team move 15 minutes in.

Lallana pickpocketed Juan Camara deep in his own half and broke forward, played a neat one-two with Firmino and then fed Mane, who finished with aplomb, high into Marc-Andre ter Stegen’s net from close range.

Suarez and Messi were quiet early on, but Barca’s deadly duo sprung into life in the 23rd minute when the former Liverpool No.7 - afforded a rapturous reception by all inside Wembley when he was substituted late on - found his teammate before the Argentine hit the woodwork.

Messi’s effort appeared to spark Luis Enrique’s side into life, and Mignolet was called into action shortly before the half-hour mark. The Belgian made a sharp save from Arda Turan’s deflected effort before the Turkish midfielder put the rebound wide.

Philippe Coutinho then curled an effort wide after shrugging off the attentions of Aleix Vidal and Mignolet denied Suarez as an entertaining, end-to-end first half came to an end.

Klopp’s side flew out of the traps after the break and put the result beyond doubt with two quickfire goals early in the second half.

First, former Red Mascherano could only divert the ball into his own net under pressure from Jordan Henderson after Mane had again got to the byline superbly, and Liverpool were three to the good a minute later when substitute Origi finished coolly after being played in by Kevin Stewart.

The Reds were rampant and Firmino nearly made it four in the 52nd minute, but the Brazilian curled wide after racing through one-on-one with Claudio Bravo.

Barca were finding it impossible to contain Mane and the Senagalese shot wide after some dazzling footwork before Grujic rounded off the win with a clever header from Lazar Markovic’s cross.

Liverpool now fly to Germany on a high for their final pre-season game against Klopp’s former club Mainz on Sunday.