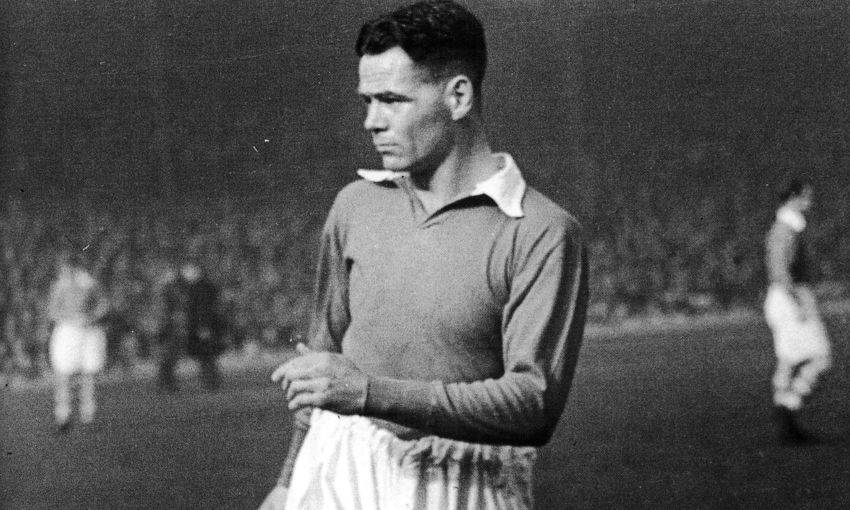 'Woodburn's going the right way - he's definitely one to watch'

It was party time on the Kop 70 years ago today as Liverpool clinched the most unexpected of their 18 league titles before celebrating in style with a cup final victory over Everton.

To celebrate this historic success, LFCTV's senior producer for documentary and long-form content, Mark Platt, has penned this great piece in tribute to the class of 1946-47.

Due to one of the worst winters on record, the inaugural post-war football campaign of 1946-47 had run into the summer and Liverpudlians everywhere nervously awaited the outcome of Stoke City's visit to Sheffield United on June 14, 1947.

The Reds had completed their 42-match programme a fortnight earlier, shocking everyone by rising to the summit and now only a Stoke victory at Bramall Lane could deny them a fifth championship triumph.

On the same afternoon, the league leaders were hosting their Mersey neighbours in the final of the Liverpool Senior Cup and the scene was set for a momentous day.

Rewind to the previous summer and no-one could have predicted the rollercoaster-type drama that was to unfold over the next 10 months.

Seven years without competitive league action meant there was no real form guide from which to gauge the title aspirations of the 22 competing teams but Liverpool were not considered to be among the fancied front-runners.

Inspirational pre-war skipper Matt Busby had left to manage Manchester United, no big-name signings had been added to what was a predominantly ageing squad and promising youngsters like Billy Liddell and Bob Paisley, who had joined before the outbreak of hostilities were, as yet, untried in the First Division. 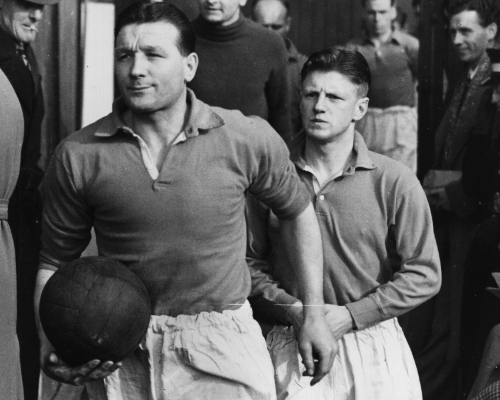 In preparation for the return of serious league action, Liverpool embarked on a ground-breaking tour of the USA organised by visionary chairman Bill McConnell.

It was to be a memorable tour in every sense. The hospitality of the Americans was exceptionally lavish throughout while, on the playing side, the 'tourists' faced little competition and repaid their hosts with a fine exhibition, remaining undefeated in all 10 games and earning widespread praise from the locals.

They returned home to a country that was gripped by football fever. The inaugural post-war league season may still have been a few months away but excitement was higher than ever before. The long break in competitive action had whetted the appetite of a war-ravaged nation and demand for season tickets at Anfield had broken all previous records.

Not even the simmering row between the Players' Union and the Football League could dampen spirits as the countdown to the big kick-off gathered pace.

Invigorated by the break from post-war British austerity, the players, beefed up by the giant steaks they'd dined on in the States, reported back for pre-season training in great shape and competition for places was intense.

The most high-profile casualty of this was skipper Willie Fagan, who found himself omitted from the first XI for the trip to Bramall Lane. It was a decision that sparked debate but one that was justified when his replacement, 32-year-old amateur Len Carney, struck a last-minute winner against the Blades on his competitive debut.

So, the Reds were up and running, but four days later Anfield's first post-war league match proved to be a huge anti-climax. Middlesbrough provided the opposition and in wet conditions a disappointingly low crowd of just 30,000 looked on in anguish as Laurie Hughes put through his own net to gift Boro maximum points.

The real drama got under way the following weekend as future Liverpool legends Paisley and Liddell made their league debuts for the club in an incredible 11-goal thriller against Chelsea at Anfield. At one stage the rampant Reds led 6-0 but they had to withstand a late charge from the visitors before running out impressive 7-4 winners.

However, the euphoria which greeted the win over Chelsea was short-lived. The Reds suffered a crushing 5-0 midweek defeat against Busby's Manchester United and that was to spark an inspired plunge into the transfer market, which was to significantly change the course of the season.

Speculation had been rife prior to the match that the club was about to announce a new signing and manager George Kay only fuelled rumours by not being at the game.

Instead, he was at Goodison and, upon hearing that Everton were planning a swoop for Newcastle United centre forward Albert Stubbins, one of the leading goalscorers of wartime football, he made a hasty dash to the north-east, driving through the night in an attempt to thwart the Toffees' bid. 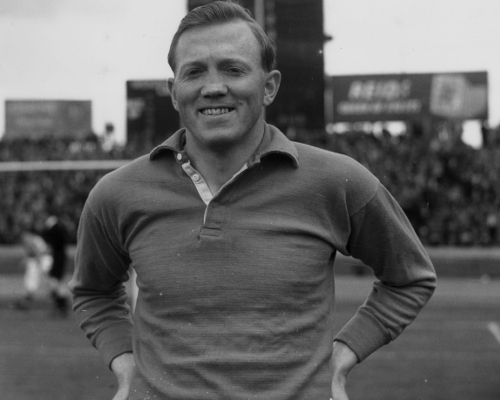 He arrived on Tyneside to discover his Everton counterpart Theo Kelly was also waiting to speak with the coveted marksman and, given the Blues' greater resources, it was they who appeared favourites to land him.

Unfortunately, for both parties, Stubbins was nowhere to be found and the start of negotiations were delayed as a frantic search for the player ensued. Believing he had gone to a local cinema with his wife, Newcastle officials swiftly arranged for messages to be flashed upon the screens at every cinema in the area, urging him to make contact.

When he finally turned up, Stubbins was faced with the dilemma of which club to speak to first and tossed a coin to make up his mind. Fortunately for Liverpool it came down in their favour and late that night, after discussions lasting over an hour, the 27-year-old shook hands on a deal to sign for the Reds.

So taken was he by Kay's powers of persuasion and vision for the future, he didn't even speak with Kelly. It took a club-record £13,000 to seal the transfer – a deal bettered only by the sale of Bryn Jones from Arsenal to Wolves – and silence the critics who suggested Liverpool's lack of activity in the transfer market during pre-season reflected the club's lack of ambition.

The impact he made was immediate. Stubbins celebrated his first start in a red shirt with a stunning goal at Burnden Park, running with the ball from the halfway line before unleashing an unstoppable shot into the back of the Bolton net. It was a sign of things to come and, although he missed a penalty on his home debut against Leeds the following week, the crowd took to him instantly.

His goals helped fire the Reds up the table but it was his equally prolific strike partner Jack Balmer who took centre stage in November as Liverpool replaced Wolves as leaders of the pack.

During this time Balmer enjoyed an unprecedented purple patch in front of goal that saw him notch hat-tricks in three successive games. His phenomenal run began with a treble at home to Portsmouth. He then hit four in an away win at Derby County before securing his place in the history books when Arsenal visited Anfield.

Not since Dixie Dean scored his 60 goals in 1927-28 had the goalscoring exploits of one man caused so much interest and 'the biggest cheer Anfield has ever known' greeted the goal that shot him into the history books.

Going into the final month of an extended campaign, five clubs harboured genuine hopes of landing the coveted prize, with only four points separating first place from fifth. Wolves were top and still favourites, followed by Stoke City and Manchester United; then came Liverpool and outsiders Blackpool.

The Reds had crucially regained their top form at the right time and impressive wins over United, Charlton and Arsenal, plus a draw at Brentford, meant their final game away to Wolves was billed by many as the title decider, even though Stoke were also still in the hunt.

On a baking hot day in the Black Country, 50,000 crammed into Molineux and watched Liverpool complete their fixtures with a famous win. Stubbins and Balmer were the marksmen as the Reds ran out 2-1 winners – a result that ended the hopes of the home side and left the visitors on the brink of a first championship since 1923.

After 42 games Liverpool looked proudly down on the rest but could still be overtaken on goal average by the Potters, who had one game remaining, so an agonising two-week wait ensued before the destiny of the title could be confirmed.

A long fortnight later, kick-off time in the Senior Cup final was put back so the outcome of the Stoke match at Bramall Lane could be relayed to the nerve-stricken Anfield crowd and, not surprisingly, the local Scouse spat, in which both sides fielded full-strength teams, for once had to take a back-seat in terms of importance.

All minds were on events across the Pennines and when a tannoy announcement late in the game confirmed what every Kopite had been praying for mass elation swept through the entire ground. Stoke had been defeated 2-1 by Sheffield United and the Reds were champions once again.

Fans swarmed across the pitch in celebration, while the players politely embraced and congratulated each other on a 'job well done'.

For the record, Liverpool then went on to beat Everton 2-1 and, perhaps for the only time in football history, a team had managed to win two competitions on the same day.

With the Lancashire Senior Cup already in the bag it had been an unforgettable treble-winning season, but there's no doubt the Championship was the prize that mattered most.

To win it against all the odds was a remarkable achievement but one that was thoroughly deserved.

A total of 26 players played their part in this famous title success and, together with chairman Bill McConnell and manager George Kay, their place in Anfield folklore is forever assured.

A book paying tribute to the class of 1946-47, 'At the End of the Storm' penned by Platt and Gary Shaw, is still available to buy on Amazon. Click here to purchase the book.