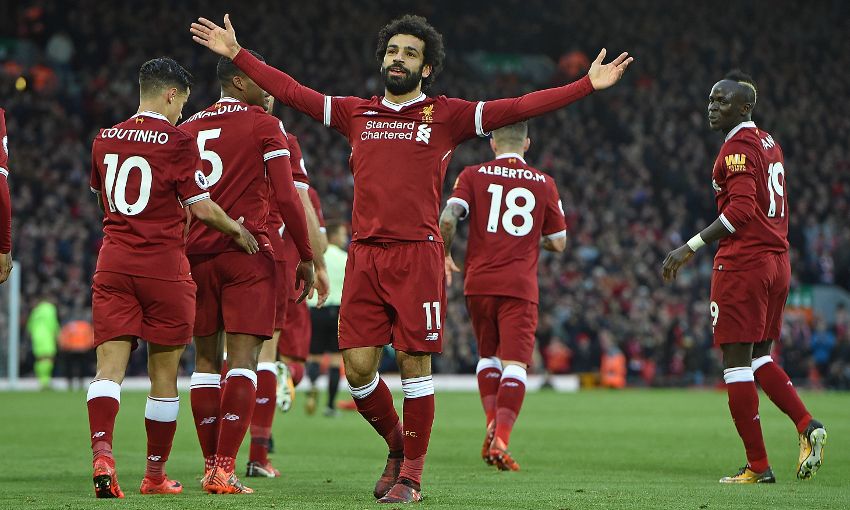 Liverpool recorded a fourth successive victory as Southampton were beaten 3-0 at Anfield in the Premier League clash at Anfield on Saturday afternoon.

Mohamed Salah curled the Reds into a 32nd minute lead when he arched a brilliant shot into the top corner from a half-cleared corner.

He was at it again soon after, converting from close range after a superlative outside-of-the-foot pass from Philippe Coutinho picked out his diagonal dart across the area.

Coutinho then got himself on the scoresheet when he reacted quickest to sweep Fraser Forster’s body block from a Roberto Firmino effort into the net after the break, completing a pleasing day’s work for Jürgen Klopp’s side on their return to action.

Liverpool made four changes for the encounter, with Coutinho, Dejan Lovren, Trent Alexander-Arnold and Jordan Henderson coming into the XI. Sadio Mane was also passed fit to face his former club.

Liverpool got the contest under way looking to build upon the three consecutive wins they’d picked up prior to the international break.

And the Reds made an enterprising start to proceedings, with just eight minutes gone when Forster was required to thwart Alexander-Arnold at close range. Salah pounced on the rebound and attempted to steer it into the near post, but Cedric Soares managed to block.

Seconds later, the Egyptian threatened again, this time hooking a half-volley wide of the upright from 10 yards after Mane’s run and cross from the left.

Next, Forster was required to pull off a save at full stretch to repel Georginio Wijnaldum’s curling effort on the turn, before the visiting goalkeeper tipped a low Coutinho strike around the base of the post after a counter-attack from the hosts.

But the Saints’ resistance was finally broken with 32 minutes registered on the scoreboard.

A half-cleared corner was worked back to Salah on the right corner of the area. He took a touch to steady himself before clipping the ball over everyone still gathered inside the box and into the top corner with a moment of quality.

And it was to be 2-0 before the interval, with Salah again on the mark.

This time an exceptional ball with the outside of his boot from Coutinho found his run into space inside the area as the hosts poured forward, and the No.11 scooped first time beyond Forster from close range.

Liverpool began the second period again on the front-foot – and Mane was denied by a block inside the box after Salah and Firmino had opened up the visiting defence once more.

However, Lovren was required to put his body in the way of a blast from Sofiane Boufal after Mauricio Pellegrino’s team looked to capitalise on the counter-attack.

Back came the Reds and only a last-gasp challenge from Oriol Romeu prevented Mane from sliding in a third after Firmino had beaten Forster to the ball.

Soon after, a pacey raid forward from a Southampton corner resulted in Coutinho releasing the ball for Alberto Moreno, but he couldn’t adjust his feet quickly enough to prod beyond Forster.

Coutinho then slalomed his way into the area and grazed the outside of the post as the home team sought to further their grip.

Nevertheless, a third goal duly arrived with 68 gone; Mane sped into the area from the right and played a disguised pass to Firmino in space. His powerful shot was blocked by Forster’s shoulder, but the ball rolled nicely for Coutinho to sweep in the rebound.

It was the No.10’s last touch, with Emre Can replacing him before the re-start.

Liverpool threatened to further enhance their stronghold, not least when Firmino skimmed the post with a low effort across goal, but they’d already done enough to make certain of the three points.