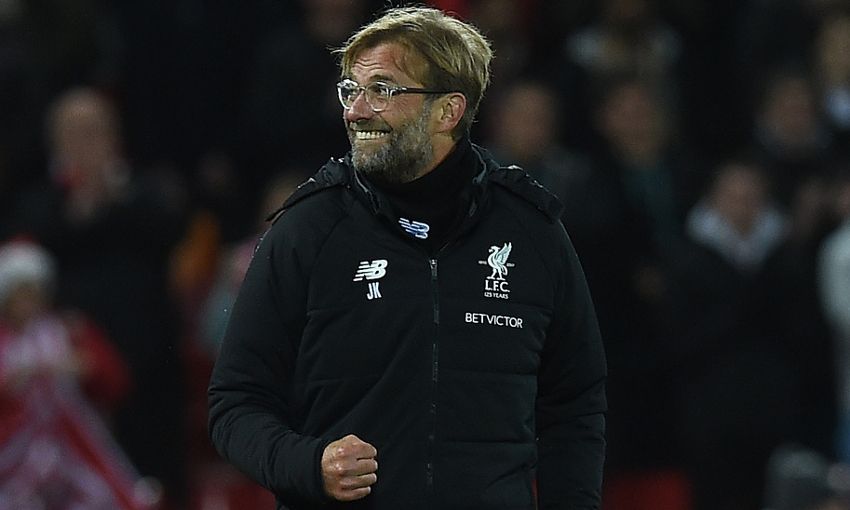 Jürgen Klopp believes Liverpool displayed an increasing maturity in their play and praised an ‘all-round good performance’ following his side’s 3-0 win over Southampton at Anfield.

The Reds recorded a fourth victory on the spin thanks to two first-half strikes from Mohamed Salah and an effort from Philippe Coutinho after the break.

It was a display that left Klopp hugely satisfied as Liverpool ensured there was no let-up in their form following the international break.

On his reflection on the game and Liverpool’s performance…

“For the first goal, the ball was already away but we forced it back somehow – I’m not sure exactly how, maybe a mistake of Southampton, but it was not a real chance from there I would say. It was a fantastic goal. The second goal, fantastic play, an outstanding forward pass – I’m pretty sure Phil has played a few more of these passes in his life, but not always when somebody gets it in the box and is not offside. That’s quite rare. It was a nice goal.

“It was an open game and in the beginning we maybe had a little bit more, we had some chances and moments, the cross from Sadio [for Salah] and stuff like this. They are a really good football team, Southampton, and you need these moments. We had them not too often so far this season, a game like this – 50 or 60 minutes and it’s still 0-0 with a similar or exactly-the-same performance [as today]. You need these goals and thank God in these moments we scored them, it makes all the difference.

“As you can imagine, I am really happy about the defending of the whole team and especially the last line, which was really strong. It was just an all-round good performance, a really deserved win and for us very important to push the top of the table a little bit together. We’re still in [there] and that’s good – [Manchester] City are obviously flying around alone; we cannot change that, but we can make pressure on all of the others and that’s what we did today.”

On a performance with ‘added maturity’ from his side…

“I know some of the other results and maybe a few people will think a little bit differently, but in my eyes there has only been on really bad [game]. The rest, we could have won all of the other games; we had to score in the right moments and not concede. We build on this now and the experiences we’ve used them, so we have a much better protection and I hope we can keep that.

“It’s not that we wouldn’t have known it before, but it’s a big part of not getting nervous in a game. It’s still a lesson for the whole of Liverpool, if you don’t score then you have to try it again, try it again and try it again. Today’s performance looked much more mature and that’s very important for us.”

“I’ve not a real idea. It’s obviously the smallest strain you can have, but he is a tall boy and maybe that’s the problem! For today there was no chance, but it looks good. I am not sure if he will be ready for Tuesday.”

“I didn’t need a reminder. This will happen over the next few weeks, we will have to make decisions. Usually I don’t think too much about the next game, but in this case I have to think about the next 13 games. I haven’t already planned them, but we need to try to. We cannot play one line-up until they are all injured, we need to mix it up – even if we win games like today.

“Joe had two games in the last week and it’s not a problem, he could have played today, but then for Tuesday I don’t think it would have been a big chance or a good idea to bring him again. We have Trent and he is another type of defender. When he started he was a proper winger and sometimes a defender, and now he is a proper defender and sometimes a winger and that makes much more sense for this position.

“He was really good today, it was one of his best performances over 90 minutes in defending. What he can do offensively everybody knows. It’s good for us we have the two of them.”