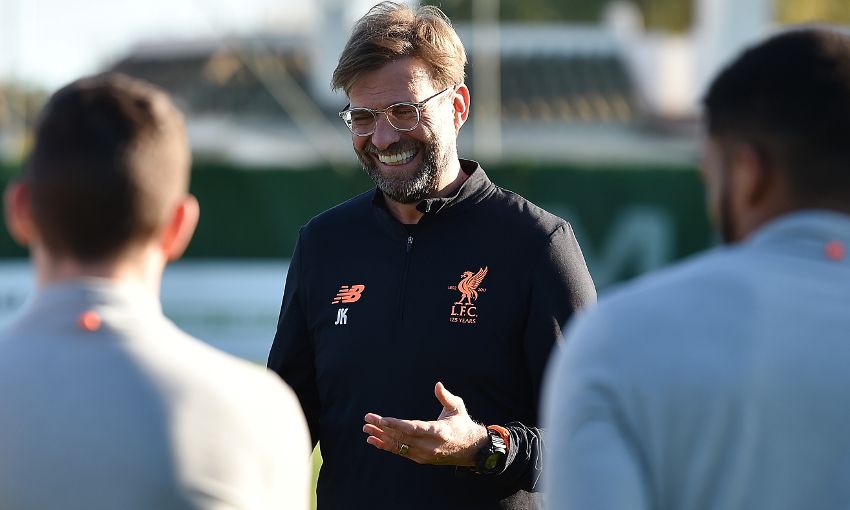 Jürgen Klopp has explained how he feels Liverpool will benefit from a change in scenery during their training camp in Marbella.

Following last night’s 5-0 win over FC Porto in Portugal, the Reds touched down in Spain on Thursday afternoon to begin a four-day workout.

The first session consisted of a recovery programme for the players who started the Champions League last 16, first-leg tie, while the remainder of the squad were put through their paces with a series of fitness drills and small-sided games.

Klopp told Liverpoolfc.com: “We are here to train, as you can see. It’s the day after the game, the boys who played did a shorter session and the rest of the boys trained for a couple of hours. That’s the reason we’re here.

“It’s also because it’s a change of circumstances, the light is different obviously, and I thought for all the things we have to do now – like working a little bit on different systems and stuff like that – it made sense that we can do it in shorts and with real light!”

Liverpool brought a 25-man squad to Marbella for the training camp and following Nathaniel Clyne’s return to full fitness, have no current injury worries.

Indeed, the work-rate and desire in Thursday’s session was clear to see and Klopp believes there is healthy, hearty competition for places firmly within his ranks.

“There are different reasons why one or the other didn’t play, but they all can play – they are all strong enough. You see Ben Woodburn in a session like this, you forget all the time how old he is!

“It is just impressive. It was a good session, but most of the time our sessions are pretty good.”

Klopp was eager to stress Liverpool’s job against Porto was only half done following the conclusion of the first leg, although the emphatic nature of the scoreline has prompted some to consider whether the Reds will make changes for the return meeting with Premier League fixtures against Newcastle United and Manchester United either side.

“We made our rotation in the winter – in November and December – to be now 100 per cent fit,” said the manager, when quizzed about that possibility. “Now we are 100 per cent fit the best players will play all the time.

“Adam Lallana has been in and out, in and out but now he is in and hopefully it stays like this because he is very important for us and is another option. Ingsy and Dom Solanke made pressure like crazy, it’s really good. Ragnar Klavan was unlucky with getting really ill and then a little bit injured in the moment when Virgil came in, but he is still a fantastic player.

“We need all of these players and hopefully we have them all available and then we will make a decision, but it’s not that I think now we will rotate before or after. We go for everything.”