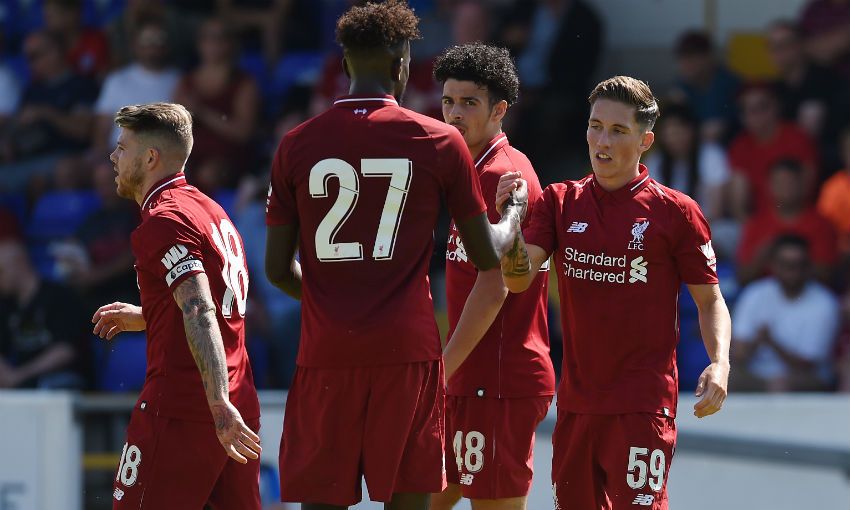 The Wales international, who enjoyed a fruitful loan spell at Hull City last term, was bright throughout his 45 minutes of action at the Swansway Chester Stadium on Saturday and crowned his display with an expertly-taken brace.

And, with a number of his teammates having not yet returned to Merseyside due to international commitments, Wilson is determined to make the most of any chance he gets during the early stages of pre-season.

“There’s a lot of us young ones who’ve either come back from loan or made the step up from the U23s,” the 21-year-old told Liverpoolfc.com.

“I think with the players still away on World Cup duty, that gives us that extra opportunity so we’re all desperate to take it and when the World Cup boys come back we’ll be wanting to stay in this team.

“I think every time you get the chance to play for Liverpool’s first team you’ve got to give it your all and show the manager what you can do with the ball and without the ball, because we all know that’s the philosophy we want to play with.

“When we lose the ball we want to win it back as quickly as possible and that’s what we try to do.”

Wilson went on to state his satisfaction with the professionalism Liverpool showcased in dispatching Chester comfortably.

“We only came back in on Monday so this week’s been quite tough with a lot of double sessions and the important thing today was getting the minutes in the legs,” he said.

“The weather was tough but I think that’s only going to help us moving forward, and to score seven goals and put in a professional performance was good.”