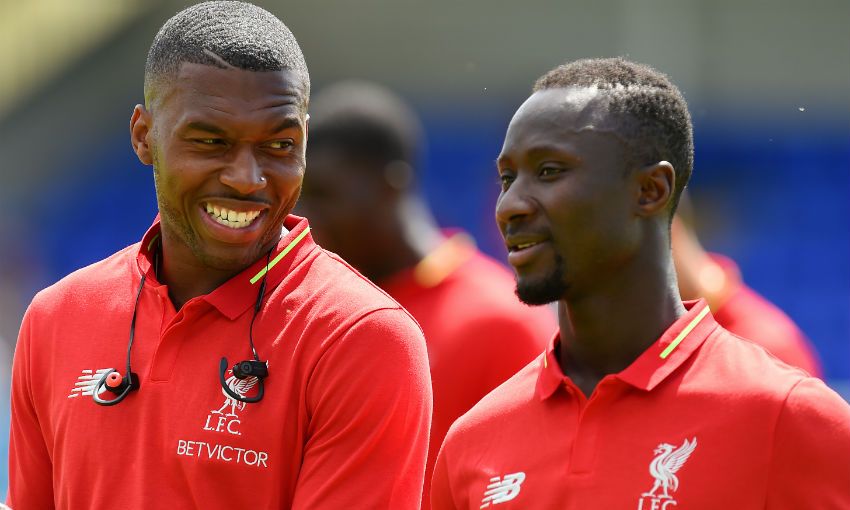 Their burgeoning understanding on the pitch was clear throughout pre-season - and Naby Keita has revealed that Daniel Sturridge has played a major role in helping him settle into life at Liverpool off the field, too.

Keita and Sturridge linked up impressively during the Reds’ summer fixtures and, while on tour in the United States, the latter labelled the former a ‘good guy’ who has ‘got everything’ as a midfielder.

That appreciation is mutual, with Liverpool’s new No.8 detailing how his positive rapport with the striker extends beyond football.

“I have to say I’ve got a lot of respect for him,” Keita told Liverpoolfc.com at Melwood.

“I’ve spent a lot of time with him in this last month and everybody has been very nice to me and very friendly, of course, but Daniel’s obviously a player with great experience and he’s a very good player as well.

“Like a lot of the lads, he’s a good laugh, but he’s also given me a lot of advice about the settling-in process and also in terms of motivation. He’s a very positive and motivating player, so this month has been very good and I’ve spent a lot of time with him. He’s a great guy.”

Regarding his in-game relationship with Sturridge, Keita continued: “It’s like with all players, you develop a good understanding on the pitch and I’ve certainly done that with Dan.

“It’s the same with everybody, but I’m very happy when I get the opportunity to play together with Dan Sturridge.”

After enjoying a comfortable period of acclimatisation to his new home, Keita is now eager to showcase his quality in competitive action, with the Reds’ campaign beginning against West Ham United on Sunday.

“Settling in the city so far has been fine because I haven’t really been out to too many places, I’m usually at home. But as far as settling into the club goes, it’s been fantastic,” the Guinea international stated.

“My first day was marvellous, everybody was very welcoming and very friendly towards me so I had no difficulties there at all. The key thing now is to get to work and show the capacity of what it is that I can bring to this club.”

So, how did the 23-year-old find singing and dancing in front of Jürgen Klopp and his new teammates?

“There was a great atmosphere at Evian - I have to say I enjoyed it a lot,” Keita said, with a smile.

“There were a lot of new players there obviously and we had this rite of passage where everybody had to get up and sing, and I did my bit. I really did enjoy it - I was quite nervous, but I did enjoy it!

“A trip like that is, for me, very good for the team, to go somewhere together. It does create a lot of cohesion among the players.”

Who was the best performer, then?

Fabinho and Thiago in contention for Atletico, but Keita absent