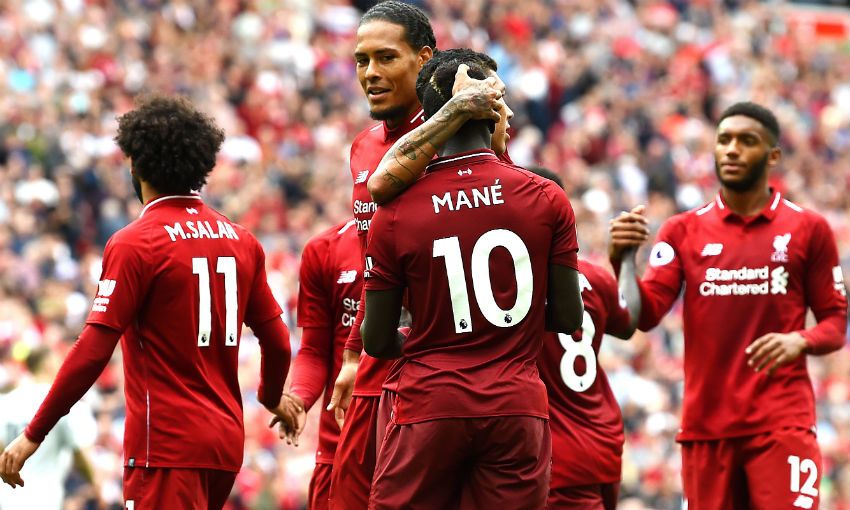 Liverpool kicked off the 2018-19 Premier League season with a commanding 4-0 victory over West Ham United at Anfield on Sunday.

Mohamed Salah opened the scoring inside the 20-minute mark when he tapped in from Andy Robertson’s low cross from the left.

There was a similar feel about the second, too, as Sadio Mane converted from close range unmarked after James Milner had nudged the ball back into the six-yard box in first-half stoppage-time.

Mane also added the third shortly after the re-start, dispatching Roberto Firmino’s lay-off into the bottom corner on the spin.

Daniel Sturridge grabbed the fourth and final goal of the afternoon, a matter of seconds after coming on from the bench, when he slotted in at the back post from a corner to cap a fine first day of the new campaign for Liverpool.

Alisson Becker and Naby Keita were handed their Premier League debuts, while fellow new arrivals Fabinho and Xherdan Shaqiri were named on the bench alongside Jordan Henderson.

An audible sense of optimism and belief hung in the air around Anfield as the game got under way, and Liverpool responded accordingly by asserting themselves from the off.

After a succession of half-chances and nearly moments, the Reds recorded their first notable attempt with 16 minutes gone. Milner’s arching ball into the path of Mane’s run was almost tucked away by the forward, but for the glove of Lukasz Fabianski.

The captain then swung in a tantalising centre from the right which narrowly evaded each of the front three by a mere couple of inches.

A breakthrough appeared inevitable – and it duly arrived with 19 minutes gone.

Keita spun into space and motored forward before releasing Robertson on the left of the area. His low cross picked out Salah at the back post, who gleefully tapped in to get his account up and running for the new season.

Liverpool were foiled a quick-fire second when Trent Alexander-Arnold’s free-kick was superbly beaten around the post by Fabianski before Georginio Wijnaldum scooped wide after pouncing on a loose ball.

West Ham mustered their first chance when Marko Arnautovic scampered into space and had an effort nicked wide by Joe Gomez before Fabian Balbuena planted a header from the resulting corner straight at Alisson.

At the other end, Fabianski again thwarted the Reds when he repelled Salah’s close-range attempt from Firmino’s pull-back.

But, with the contest deep into stoppage-time, the home team did claim their second. Robertson hung a ball towards the back post where Milner did magnificently to keep play alive and divert it back across goal, enabling Mane to tap in from six yards out.

West Ham had an opportunity to reduce the deficit moments into the second period when Felipe Anderson’s near-post flick from a corner found the unmarked Michail Antonio, but he couldn’t adjust his body to convert.

Shortly after, Liverpool furthered their grip on the contest when Mane netted once more.

This time Firmino managed to nudge the ball into the path of the No.10, who spun and steered a low shot into the bottom corner.

As the contest entered its final quarter, Henderson was introduced from the bench in place of Firmino as the Reds threatened a fourth.

Wijnaldum clipped over the bar and Salah went close to nudging in another Robertson delivery across the face of goal.

Shaqiri replaced Mane in the final stages to make his league bow before Sturridge came on for Salah.

And with his first touch, Sturridge steered in the hosts’ fourth, meeting a corner at the back post and nudging in just seconds after coming from the bench.