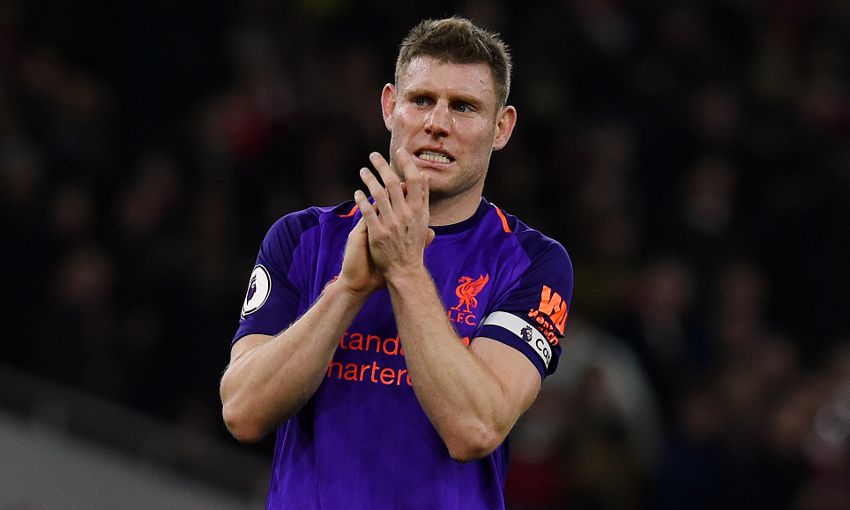 James Milner left Emirates Stadium frustrated with a 1-1 draw against Arsenal but argued that feeling in itself is a positive for Liverpool to take.

The midfielder appeared to have given his side three points from a frantic meeting with the Gunners after driving home a loose ball 61 minutes into the game.

Jürgen Klopp’s team were unable to extend their advantage, though, and Alexandre Lacazette salvaged something for the hosts when he found the net shortly before full-time.

Watch: Extended highlights from the Emirates

“[We are] very disappointed really, which is a good thing I suppose, playing away at Arsenal,” Milner told Liverpoolfc.com post-match.

“To be 1-0 up in the second half and not see it out, we are disappointed; with the chances we created we should have scored a few more goals.

“It’s pleasing we are creating those chances, but we could have been a bit more ruthless and maybe not put as much pressure on ourselves not to concede to win the game.”

Saturday’s result followed up Liverpool’s victory at Tottenham Hotspur and draw by the same scoreline with Chelsea in away games against their nearest rivals in the table.

By contrast, Klopp’s men accrued only one point from those three fixtures last term.

“This draw is different to Chelsea, for example, so there are ups and downs and things that we can learn,” said Milner, who reached the milestone of 50 Premier League goals.

“But you can see we are moving forward as a team and we are defending well together. Again, that’s another learning curve for us – to see those sorts of games out.”