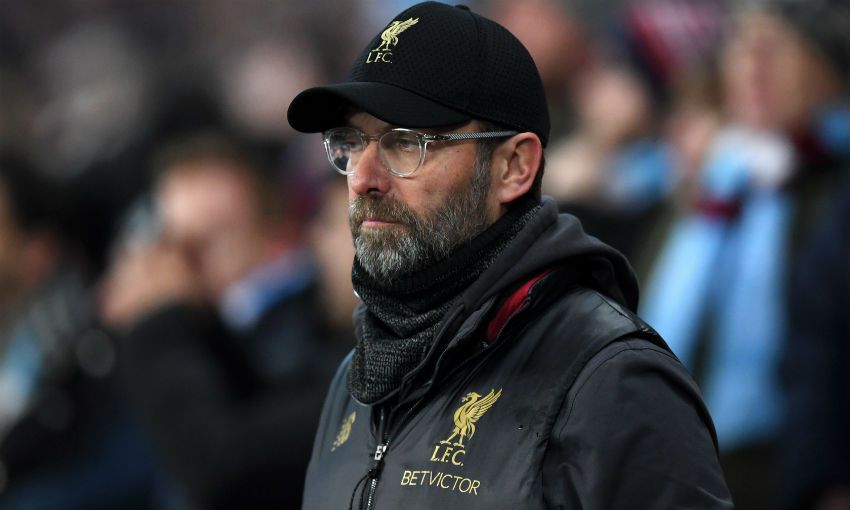 Jürgen Klopp felt Liverpool could consider themselves unfortunate to have suffered a first Premier League defeat of the season after they were beaten 2-1 at Manchester City on Thursday night.

The Reds succumbed to a narrow loss in the top-of-the-table clash at the Etihad Stadium, with Pep Guardiola’s side cutting their lead at the summit to four points.

Sergio Aguero and Leroy Sane struck either side of a Roberto Firmino equaliser to secure the result for the home team; however, the visitors created a handful of opportunities to add to their tally. Not least when Sadio Mane struck the post with the scoreline level at 0-0 in the first half and John Stones subsequently managed to clear with just a fraction of the ball not fully across the line.

Klopp offered his thoughts on the contest and how it has impacted the Premier League standings in his post-match press conference. Read on for a summary of what he had to say.

On his overall opinion on the game and the result…

[It was] pretty intense. It had wild moments, both teams obviously have a lot of respect for each other. Let me say it like this, we [have] played better games, but we took the intensity today. City had a few more moments when they controlled the game, but we had these moments as well – not as long or maybe as often as City, but it’s an away game and that’s absolutely OK. And the opponent is City and they are used to it much longer than we are. In the end, you can say post [and] in or post [and] out can make a massive difference – today we witnessed that. I don’t know exactly, but I heard it was pretty close with our goal [Mane’s chance]. Then we could have scored two; of course, City had counter-attacks, especially when we lost the ball, it was really dangerous.

In the second half, we had really big chances with no counter-attacks involved pretty much – Mo with a very good finish but a fantastic save from Ederson, Gini and Bobby Firmino chances and all these things. Quite often, they had to make sliding tackles and blocks in their six-yard box and that doesn’t happen too often for City I would say, so that is credit to my boys that we did that. In the end, we lost it and we take that – it is not the first game we lost in our lives. It’s not really cool, but it’s one of the three results that could have happened and it’s the one we didn’t want, but we have to take it. Now let’s keep on moving.

On whether City ‘proved to themselves’ they can beat Liverpool…

I knew before City could beat us, that’s not new. Last year they beat us 5-0; [tonight] is not the first time so it’s not a surprise. I don’t think it had anything to do with any mental strength one side or weakness on the other side or whatever, it was a bit unlucky. It was a wonderful counter-attack [from City], a nice pass from Raheem [Sterling] to Leroy [Sane] and then post in. Post [and] in – that’s how it is sometimes. Sometimes it can be lucky or not unlucky; they blocked twice against us on the line in the second half. Is it mentally stronger to block a ball on the line or not? It’s just luck, you are there or not there. I didn’t see that in the game, to be honest, it is not a surprise City can beat us. No news.

On Fabinho’s performance after he came off the bench…

I think system-wise there was not a real alternative in the beginning, especially when we adapted then pretty well after we changed system, but actually only I think because Gini played really well then on the left wing, on the half-left, or whatever. Of course Fabinho was good, but Hendo was really impressive [too]. Offensively I think we had already more moments in the game, but obviously when we played football, and that’s what we showed the boys at half-time, immediately we were a major threat for them. We came through, we passed through, the chance of Sadio was brilliant, we had other moments when we played the ball and when we took it and accelerated. If you can outplay their counter-press then each team in the world struggles, even Man City, and we had these moments.

Sometimes it’s just a little bit: the cross was not good enough or the last pass, that happens. But it’s not about one or two players, you just have to constantly work for the momentum – if you have it then try to keep it, if you don’t have it then you try to get it. In a lot of moments it was really wild, a lot of rusty moments when somebody kicked the ball out, a blue one, a red one, and you think ‘what’s that?’. But it’s because they felt completely under football pressure – ‘the next player is coming, I don’t have time’. It was a really intense football game for both teams. They won it, we lost it and it is sometimes like this.

I have so much faith in my players you can’t imagine. If somebody would have told me after both games against Manchester City we are four points up, I would’ve paid money for it like you wouldn’t believe. For us it is really important we take it game by game because there is no other chance. If we would have won the title five times in the last 10 years then we go 100 per cent, but we don’t have the experience in that. Why should we behave like somebody who won it all the time? It’s true that we didn’t win it for a long time, the club didn’t and we never won it as a team, that’s how it is. We want to finish the season as good as possible and that’s our right, we can do that. We are still in a pretty good position so it’s all fine for us. Not in the moment, it feels really bad, but it’s only the moment. Tomorrow morning we wake up, it feels still average and then we have the opportunity to work on it and prepare for the next game and that’s what we will 100 per cent do. That’s all.

On Vincent Kompany’s tackle on Mohamed Salah in the first half, for which he was booked…

I think everybody knows it. I like him [Kompany], he is such a fantastic player, outstanding. I loved him already when he was at Hamburg, what a career. But situations like this happen, a player makes a decision to slide in and go on the ground, but he just took the risk and if Mo is on his feet really, we talk differently then. He’s still a nice guy with a really bad decision. What I said last time [after the last game] when somebody asked me ‘was it a dive?’ – do we need blood? Is it like this? In that situation everybody knows, if Mo can go through, come on, what happens then? I don’t blame anybody, it’s just in a situation like that, make a decision. We got it here last year in the summer, got a red card and nobody thought about it. It was a red card, probably yes. Did he want it? No, Sadio didn’t want it for a second. He didn’t see him but he hit him. Here he saw him and he hit him, not as bad as it could have been, that’s all. You can make of it what you want. Look at it and make your own opinion.