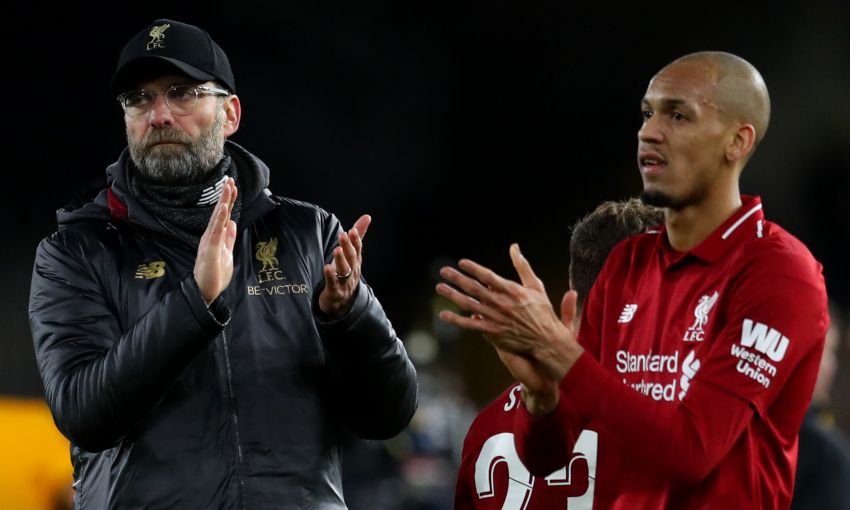 Jürgen Klopp has discussed the situation of his squad options and the challenges Liverpool will have to embrace in the second half of the season.

The Reds resume their Premier League campaign as leaders on Saturday, when they face Brighton and Hove Albion away from home.

With fatigue and injuries affecting the players after a frantic run of fixtures, Klopp made nine changes for the FA Cup defeat at Wolverhampton Wanderers earlier this week.

The manager reflected further on that decision – and the reasons for it – as he previewed the trip to Brighton during his pre-match press conference.

He also assessed the form of Virgil van Dijk, the prospect of Fabinho playing at centre-back at the Amex Stadium, and the consequences of being eliminated from the FA Cup.

Read his answers on those topics below…

I think much more positively about my players than I talk to you about them; the problem I have is if I follow your path with praising things, we create headlines. They don’t make sense. In the end, if Virg looks back on his career in, hopefully, he’s a centre-half so he can play maybe until 39 or so. There is a lot to come. If everybody is looking back then and says he was the best centre-half in Premier League history, then he did a lot of good things during his career. He has outstanding potential. He is a fantastic person, he is physically strong and has all the technical things you need as a centre-half. So many things were already good and many things he can still improve. That’s the situation. I don’t have to judge him now and compare with other players in the past. Most important is that he is fit, so far constantly – that helped a lot. It helped him a lot as well because he could get rhythm and stay on track and all that stuff. I really like him as a player and a person, good boy.

On having to use players out of their ‘natural’ positions…

If you speak about Fabinho, if he has to play as a centre-half, for example – which is not sure in the moment – but if, he played it before. We do that [planning and adaptation] on the training pitch. With a lot of information you have – and I have it obviously – you can complicate things. What we want is the natural understanding of the game because it’s still only football; if you are a holding six or a centre-half, with the ball it’s easier, without the ball it’s different because you don’t have a line behind you. But they are pretty much the two most important things, so use one and be prepared for the other, and everything will be fine. You have help from players around, one player usually can’t decide a game up front; it happens from time to time, but in defence you always need the boys around you. We speak a lot during the week but we try to make it not more complicated than it is.

On the benefits of some senior players being ‘rested’ on Monday…

We had to make changes for the Wolves game. The players we didn’t line up in that game were either a little bit injured, or injured, or played all the games in December, plus the City game at the beginning of January. Bringing them again in that moment, as you saw with Dejan [Lovren], who played pretty much all these games as well, is a risk – it’s a proper risk. We judged that it was difficult and we had to try differently. That’s now the situation. We don’t have a massive squad at the moment in training. They are not out for long. The question will probably come: ‘What about centre-halves?’ It’s not cool in this moment but probably in two weeks it will look completely different; I cannot make a decision for today and then in two weeks I created a problem with my decision today.

We are fine. A season is always like this – whoever deals the best with his problems has the most success. We had problems in the past and dealt very well with it, now we have a few different problems and we tend to deal well with that as well. Then, let’s play football, using the quality and potential of the boys in the best way we can. Use them in the right moment, train all the important things, like different systems. It’s possible if you have a normal week, you can train. Hopefully we don’t have a lot of normal weeks because we want to stay in the Champions League as long as possible, but we don’t know that in this moment. Let’s use what we have and make the best of it.

There’s no advantage. If you have all your players available, it’s brilliant that you can always play them, it’s really good – make little changes. Usually, centre-halves don’t have to change too often because they could play pretty much the whole season. You mix it up a little bit here and there, like we did in the first part of the season. It was brilliant, we could make changes, and it’s not different. If we came through December without injuries then everything is fine. Unfortunately, we didn’t come through 100 per cent. It’s quite special if you would bet on having three centre-halves injured in the same moment – you could win a lot of money for that because usually it doesn’t happen. Here it happened, it was a bit of bad luck. That makes it quite a bit tricky. But that’s all.

We have to use our situation, why would we compare it to other situations? The Champions League starts in February and then we talk again completely differently. Other teams played games and now they are still in the competition but they can deal with it, you can see it. We could deal with it as well with the right number of players. That’s how it is. There’s no advantage. We have to use the time; you can do a lot of wrong things when you have a week to train, that’s possible! We have to use the time and really be, week in and week out, in the best shape we can be. Understand the situation right, understand the job right, understand the challenge right and go for it – that’s our job, nothing else.