Roberto Firmino's multifunctionality in the Liverpool system has earned lofty praise from teammate and compatriot Fabinho.

After leading the Reds attack in 2017-18, Firmino has regularly been deployed in a deeper position by Jürgen Klopp this season with Mohamed Salah moved further forward.

Only Salah has scored more than the Brazilian, however, with a recent spate of strikes – including a hat-trick against Arsenal – bolstering his tally to 11 in all competitions.

It was after that star turn in the 5-1 win over the Gunners that Klopp explained why Firmino’s importance to the Liverpool set-up means his goal return is irrelevant.

And now Fabinho, a teammate for club and country, has provided a player’s view on just what makes the No.9 such an influence from a variety of areas on the pitch.

“Firmino is a player who is really good at adapting to different positions. He is a No.9 but he helps a lot in build-up play,” Fabinho recently told Liverpoolfc.com.

“He is very important to the team in many stages of the game; he plays as if in the No.10 role or a No.8 role, he is a really smart guy who adapts to what the team needs.

“He is great at playing with his back to goal and, like I said, in build-up play and starting attacks. He helps a lot in general teamwork as well as being a top finisher. So, yes, he is a really important player for us.”

Firmino continued his scoring streak with a trademark shuffle and shot at the Kop end during last Saturday’s breathless 4-3 success over Crystal Palace.

Fabinho concurred with the suggestion that, at his best, the 27-year-old can lay claim to being a ‘complete forward’, adding: “No doubt about it.

“He is a player who, outside the box, is really smart and he makes the team tick. In the box, his finishing is indisputably good, both with his right foot, left foot and in the air.

“If you look at the four goals he scored against Arsenal and City, you can tell he’s a big-game player. His confidence is sky high and I hope he keeps up this confidence and keeps scoring goals for a long time to come.” 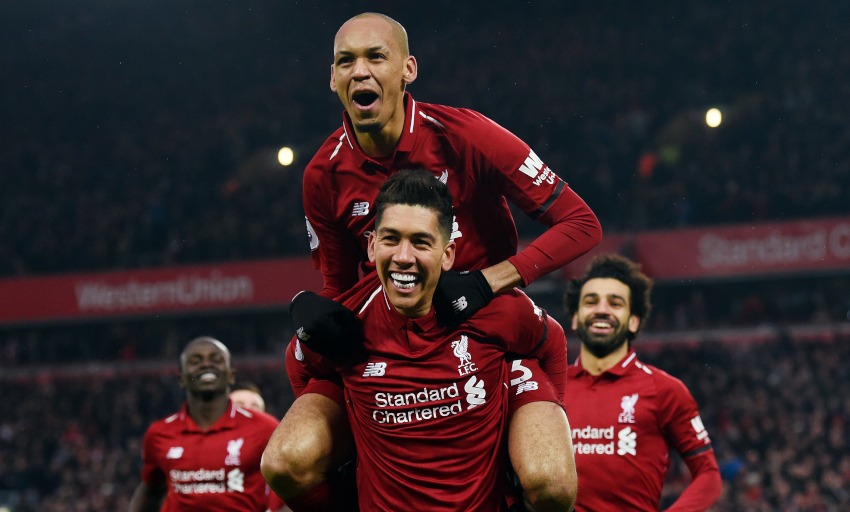