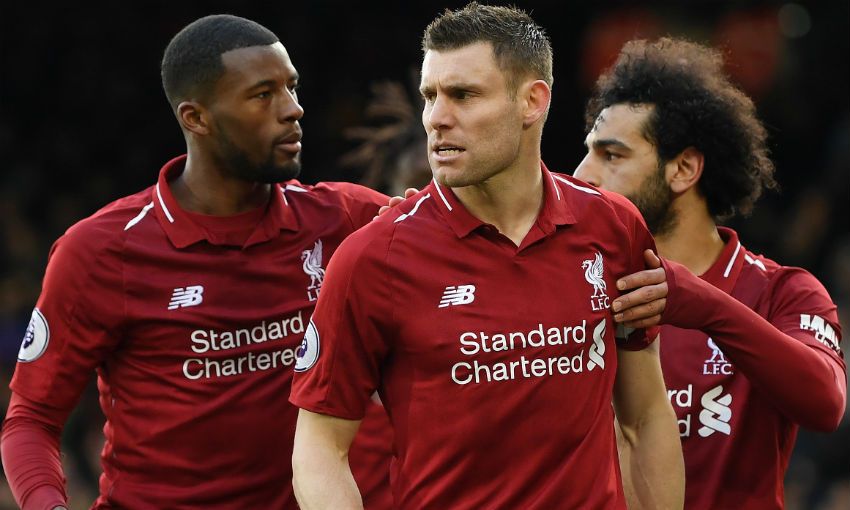 James Milner knows what it takes to win the Premier League.

Liverpool’s vice-captain did so twice during his time with Manchester City - the club he is attempting to overcome in an ongoing, nip-and-tuck battle for this season’s title.

The Reds’ bid to come out on top resumes on Sunday, when Tottenham Hotspur’s visit to Anfield marks the start of the final sprint towards 2018-19’s finishing line.

So, will Milner be imparting any wisdom regarding his own experiences to his teammates over the coming weeks?

“Hopefully, that’s my job. Unfortunately I’m one of the older guys, if not the oldest guy, now and it’s important that you do that and help the guys out,” the No.7 told Liverpoolfc.com with a smile.

“I think we just want to keep playing the way we’re doing and for people to not get too tense or think about what’s going to happen down the line, what could happen or ‘what happens if this result happens?’

“Just play football, just keep doing what we’ve been doing. That’s the main thing: that we go out there and keep putting in performances, keep the intensity high and don’t get caught up in everything else, the hullaballoo that’s going to be going on outside.

“People are going to be excited and they want us to do well and there’s a lot of pressure from within inside the dressing room every game whether you’re challenging for a title or not [because] you’re performing for Liverpool.

“The dressing room’s full of top-class talent who put a lot of pressure on themselves to perform, so it’s just down to us to concentrate on what’s going on inside that dressing room and carry on.”

We caught up with Milner at Melwood ahead of the clash with Spurs.

Read on for the midfielder’s thoughts on the run-in, the post-international break challenges faced by all teams, and how the Anfield crowd can play their part again this weekend... 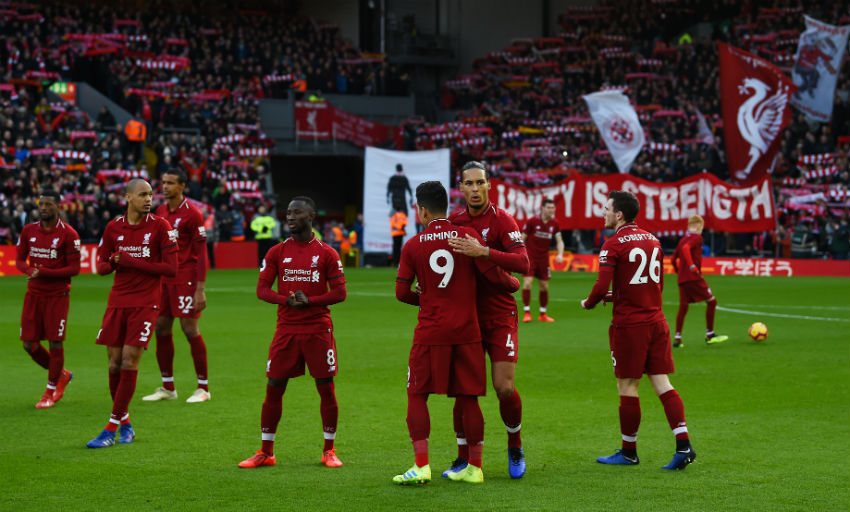 Sunday’s game is the first of seven in the space of just 26 days. With so much still to play for domestically and in Europe, do they all feel like finals now?

Yeah, I think we all know they’re all important but that’s pretty much what the season’s like when you’re playing for a top team and you’re challenging on different fronts. You’re going to have games every three days and again that goes back to needing the squad and everyone fit and raring to go.

I think obviously the end’s getting closer now and every game is important, but we just have to go out there and keep doing what we’ve been doing for the rest of the season - performing well, trying to play the best football we can and remain solid. We’ve defended well back to front or front to back all the way through the season and I think that’s been a good base for us to go forward from there. I think with the attacking players we’ve got, we’re always likely to score goals.

That’s what you work hard for all season, isn’t it: to get yourself into a position to win trophies…

I think you always want to get off to a solid start in the season and we managed to do that, but I think people start talking about things very early on [about] where you’re going to be and what you’re aiming to do. Obviously as a team we just want to start the season well, get off and running and then hang around and get through the Christmas period where it’s always tough and so easy to drop points in a couple of games. You could have a couple of bad performances in five days and you’ve lost three games with the intensity of the Christmas period!

The league always changes through Christmas and you get out of that and assess where you are. To be where we are now is in a good position, we’re right in there and obviously in the Champions League as well. This is the time of the season where you want important games and cup finals every game. That’s what we want to do: progress in the Champions League but also finish the season as strongly as we can and hopefully that’s good enough.

Is Sunday the kind of game you want after an international break? A big one against top-class opponents, at home and in what’s sure to be a great atmosphere?

It’s always tough after the international break no matter who you’re playing, really. We know how important every game is and you’re getting three points whether you’re beating Spurs or whoever. Every team’s tough to play and every team’s tough to beat, and you saw that at Fulham as well. They haven’t had the best of times and we just managed to get over the line, so we know how difficult it is, especially when the boys have been travelling all over the world, playing for different teams and playing in different systems.

To come back in and click straight away, that’s down to the work that we’ve done since we’ve been together, since the manager’s been in and the team spirit we have here to get the lads back up and running again. It is tricky, but it’s the same for all teams and Spurs have had a lot of players away as well. It’s not ideal, but being at Anfield obviously helps and having the fans behind us will help us get back on that front foot and start where we left off.

The 2-1 win over Spurs at Wembley back in September was arguably one of Liverpool’s best performances of the season. Did that result, and the way you achieved it, add to the belief that you could do something special?

I don’t think so in that way. I think it was an important result, obviously. Starting the season well and beating a team who’s been challenging in the last few years away from home with a good performance, that obviously gives you a boost. But hopefully the boys didn’t need too much of a sense of belief at the start of the season - we went to a Champions League final and lost there, so to do that you know you’re a good side.

We know we’ve been improving year on year so I think the only thing we can do next is win a trophy, that’s the next step for us. We know we can beat the top teams, we can beat anyone on our day. In the past that consistency hasn’t been there but this year I think there’s been times where we haven’t played well and managed to get the three points, and that’s a sign of a good team as well. So over the last few years you’ve just seen us improve all the time step by step and hopefully we can keep doing that and be successful.