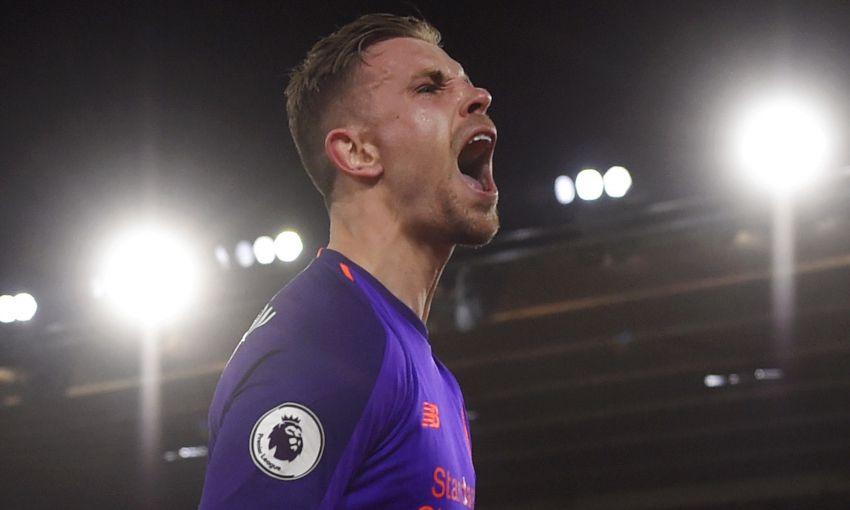 Jürgen Klopp has reiterated the depth of his appreciation and respect for Liverpool captain Jordan Henderson.

The midfielder played an influential role in securing three points for the Reds at Southampton on Friday night after being introduced in a more advanced position in the second half at St Mary’s.

Henderson was involved in both late goals of the 3-1 comeback win, releasing Mohamed Salah on the counter-attack to put Klopp’s side in front and then rushing forward to knock home Roberto Firmino’s cross and guarantee their return to the Premier League summit.

“That goal meant so much to him and to us. He’s just a fantastic boy. He deserves all the praise but he doesn’t get too much of it,” said the manager.

“Hendo, from my point of view, is a brilliant player. He’s our skipper, he’s a fantastic character. If I had to write a book about Hendo, it would be 500 pages.

“So I’m very positive. The most difficult job in the last 500 years of football was to replace Steven Gerrard. In the mind of the people it was like if it’s not Stevie, then it’s not good enough.

“And he has dealt with that outstandingly well so he can be really proud. Now we have to think of the future and he is a very important part of our team.”

The deployment of Henderson further up the pitch, following his 59th-minute substitution, came as a result of previous conversations between the skipper and the boss regarding his potential impact there.

“Make a difference,” was Klopp’s request in the final moments before Henderson and James Milner entered the action with the score level on the south coast.

Their mission was accomplished and though the manager does not rule out again using his captain in the deeper-lying role that has become customary in recent seasons, he relished the success of the tactical switch and the celebrations that followed the third goal.

“I’ve seen him a lot like that. That’s Jordan, that’s him,” added Klopp.

“When I came in and thought first about the team, Hendo was a box-to-box player. We made him a No.6 and that’s good. I think it’s helped him a lot to play in different positions.

“I told him already that that doesn’t mean he will never play as a No.6 again. He thinks it makes sense, and that’s absolutely true. We play different systems.

“Millie and Hendo were both really pumped up. It helped us a lot.”