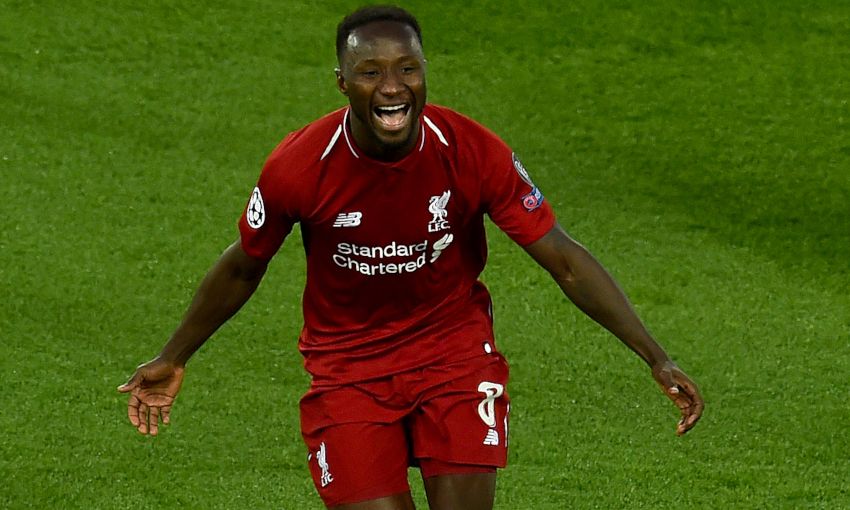 Two goals in two games after 27 matches without one to crown two highly praised individual performances. It’s fair to say it’s been a good week for Naby Keita.

The midfielder secured his first strike for Liverpool when he nodded in a crucial equaliser at Southampton last Friday night, setting the team on their way to a 3-1 victory.

Still, although delighted to be off the mark, Keita retains perspective of the bigger picture.

“Of course, yes, I think all players, everyone, would be happy to score their first goal,” he told Liverpoolfc.com during a chat at Melwood. “But for me, the most important thing is the team – and I’d love the team to win every match we play.

“Yes, it’s true it’s taken a while for me to score, but I’m a midfielder and we already have goalscorers here – Mo Salah, Firmino, Sadio – so we in midfield take advantage of the opportunity to help them.

“We are there to help them score and if we also have the chance to score ourselves, we try to take it. But the most important thing is for the team to win – above everything.”

Keita followed up his maiden goal with another – the opener in the Reds’ 2-0 Champions League quarter-final, first-leg encounter with FC Porto at Anfield on Tuesday night.

His industrious, high-energy display earned plenty of plaudits – was it the Guinea international’s best performance for Liverpool, as some have since suggested?

“When you’re playing, you can’t see yourself – it is people who are watching who know,” he smiles in response. “When you hear things like that about yourself, you just have to carry on and try to do more.

“You can’t stop and you can’t be happy with it. I am happy people appreciate me – and what it does for me is give me more desire to work harder and do more.

“For me it is nothing [at the moment], I am going to carry on training and following the advice of the manager during the sessions – and that’s it.”

‘The real Naby is coming still,’ were the words of Sadio Mane, who outlined his belief that his teammate and “little brother” has buckets more to showcase.

“Of course [he’s right],” Keita says. “Before training I go to the gym with him every day to try to improve. I am feeling good and I am going to carry on like that to finish the season well with the team.

“It’s up to the manager to tell me how I can improve, but during training I try to give everything, especially to get the ball back and run a lot on the pitch because I’m in midfield. And also, to try to help make our forwards score goals.”

After starting – and starring – in Liverpool’s last two fixtures, Keita will be hopeful of getting the nod once again on Sunday when Chelsea come to Anfield in the latest round of Premier League matches.

While the Reds will aim to maintain their position at the summit, Maurizio Sarri’s side have aspirations of their own as they seek a top-four finish and a return to the Champions League.

“We will concentrate and won’t underestimate any team. We’re in England and all the teams are tough. We have been concentrated since the beginning and I think we will do all we can to finish the season well.”

Liverpool currently lead Manchester City by two points in the standings, but have played a game more.

Pep Guardiola’s men kick off ahead of the Reds on Sunday when they travel to Selhurst Park to tackle Crystal Palace.

“No, we won’t be watching Manchester City – we will just try to concentrate on our match ahead,” Keita responds when asked if the squad will be keeping an eye on events in south London. “We will look at the numbers at the end of the season. That’s it.

“As the coach tells us every day, we have to concentrate on what we’re facing next, the match that is in front of us. You concentrate, you play, you try to win and we will see at the end of the season.

“Chelsea won’t be an easy match. They are a team that will be coming looking for victory at our home ground. But since we are playing at home we will have the fans there supporting us.

“I think it is important for us, but we’ve not won the points yet, so we’ll do everything we can to try to get them on Sunday.”

Something Liverpool will definitely have in their favour on Sunday will be the support of the home crowd.

“The truth is, they give us more and so if we think of them, then we will give everything on the pitch to make them smile.”