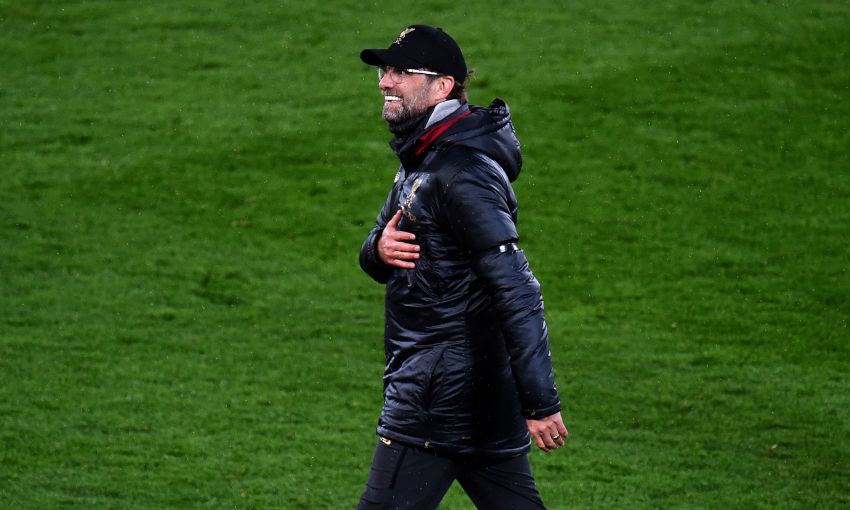 Jürgen Klopp believes harnessing the power of Anfield has been instrumental in Liverpool's season.

The Reds contest their final home game of the campaign this afternoon when Wolverhampton Wanderers visit Merseyside – and still harbour hopes of becoming Premier League champions.

The fixture comes just days after Anfield witnessed one of its greatest ever comebacks as FC Barcelona were defeated 4-0 in the second leg of the Champions League semi-finals, overturning a three-goal first-leg deficit in the process.

Klopp wrote in his column in the official matchday programme: “It is not possible to ignore the impact of Tuesday night, but I think it is on us – again all of us, not just the players – to make sure we take it and use it as an advantage. It was a physically and emotionally intense occasion. Of course, this affects human beings.

“The physical effects are that we have a few more players with bumps and bruises. At the time of writing these notes I’m not entirely sure who will be available to pick for certain today. But the emotional and mental effects must also be managed.

“This is why I think the togetherness between supporters and players is going to be at its most important. The fans are our energy source and it is a cast-iron certainty that there’ll be moments today when we need them. It is so important we only worry about our team and what is happening at Anfield.

“On Tuesday night we didn’t care what anyone outside of the LFC family thought about our situation – we were all about creating our own moments. Same today please. Let’s make today about us, as Liverpool, finding the joy that comes from the moment.

“What we do know is that our season does not end today because of what happened against Barca. But regardless, this is our last outing at Anfield for the campaign and as such I want to express gratitude for the amazing journey we have had together.

“I was asked in the post-match press conference on Tuesday night if Liverpool could have won the tie if we played in a stadium without any supporters. My answer was ‘no chance’ but it made me reflect on how blessed those of us who work here are.

“This season, although yet to be concluded, has been a privilege to be part of. And the privilege comes because it matters to more than just ourselves. If you only care about yourself what sort of life is that?

“There are so many things in the world at the moment that are more important and serious – we all know this. But what we do here – with our supporters – has brought joy. And it’s reciprocal joy – that’s why it’s special. The team performs for the supporters and the supporters give back to the team. It is a collective experience that is so positive. If only the rest of life was like this.

“I am so thankful for every person who has played a part in this until now. Of course, as I have said repeatedly, this isn’t a destination and our journey goes on regardless, but we can still find time to be appreciative of each other in these moments.

“Whatever happens, we are what we are because we have come together and we have all played a part. This is Liverpool now: a powerful collective who looks to live in the moment and embrace the joy of it.

“Thank you, Anfield – you are special.”