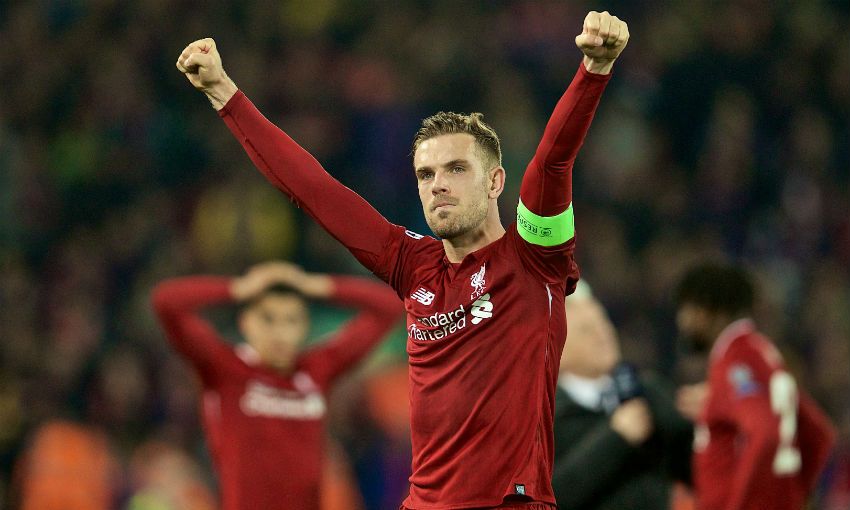 Jordan Henderson was busy taking precautions to thwart a Barcelona counter-attack when Divock Origi scored the goal that put Liverpool in the Champions League final once again.

Trent Alexander-Arnold's quick thinking from a corner caught the visitors off guard as Origi converted to put the Reds 4-0 ahead in the second leg of the semi-final.

So what was the captain's view of the moment Anfield's greatest ever European comeback was completed?

"I think I was sort of talking to someone and organising something, just protection for the corner," Henderson told UEFA.

"I'd turned around, I'd seen the ball flying into the back of the net. I didn't really know what had happened.

"It was an amazing goal to score in a game of that magnitude. It was fantastic for a young player to have the awareness to be able to do that and put in the ball and obviously for Divock to react to that.

"It was a great finish in the end. So yes, it was an amazing goal in the end and that summed up the night really.

"It was an amazing night. It was a special night that people will be talking about for a long time."

The 4-3 aggregate victory over the La Liga champions booked Liverpool's spot in the final of Europe's premier club competition for the second successive year.

A meeting with Tottenham Hotspur in Madrid on June 1 now awaits Jürgen Klopp's men, who are looking to secure the club its sixth European Cup.

"It means everything," Henderson added. "For the club, for the fans, for everybody involved, but most importantly for the players.

"Not many people would have thought [it was possible] at the start of the season - especially at the end of last season, it was a difficult end.

"We all know how good Spurs are - great players and on the day, they can beat anybody really. So it'll be a really tough final. So we need to be ready."