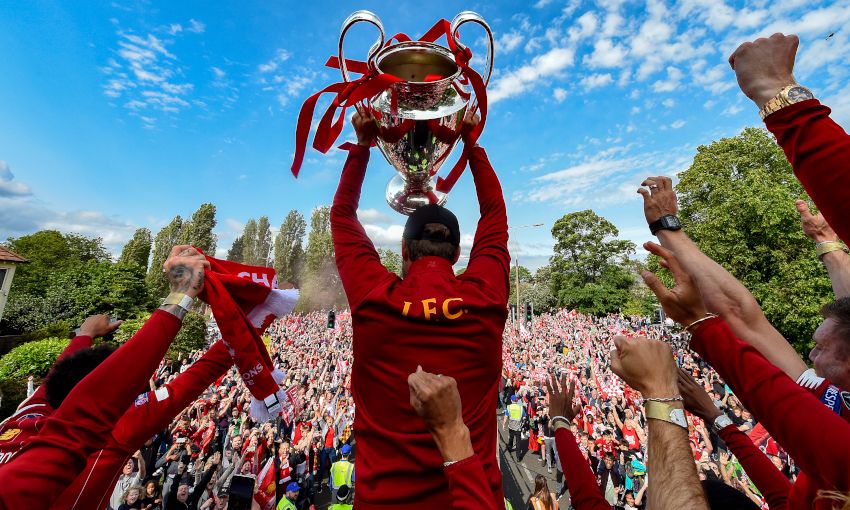 The day after securing the club's sixth European Cup by beating Tottenham Hotspur 2-0 in Madrid, the Reds shared their success with the thousands of supporters who lined the city's streets to celebrate.

And we were on board the team's open-top bus to catch up with several key figures in Liverpool's latest triumph...

"I cannot really describe it because I cried a little bit as well because it's so overwhelming what the people are doing. When you have a direct eye contact and you see how much it means to them that's touching, to be honest. It's brilliant. Thank God the weather changed in a positive direction so we are having a wonderful time here. It's really special.

"I don't know exactly how many people live in Liverpool but there's not a lot of space for fans and supporters of other clubs, so it's incredible! This team is really doing so well and if you are a young kid, which team would you support? There are not a lot of other options and opportunities apart from Liverpool so it's really nice to see. You see in their eyes how much it means. It's unbelievable and it's so intense. Today, wow! It's crazy."

"It's amazing, absolutely amazing. We were looking forward to it straight after the party last night, to get back. It's amazing to come back with the trophy to show the fans."

"It's amazing, it's something special. You have to really experience it. It's unbelievable what it does to the city and obviously to the club as well. I'm very proud to be sitting on this coach and hopefully we can have more days like this.

"I think there's still more to come but it's already been past my expectations. I'm just taking everything in and enjoying every bit of it with all of these fans."

"It feels good. I think today we can celebrate. We have a wonderful team and Liverpool is celebrating today, we can feel it.

"It means a lot to the people, I can see it in their eyes and in their reaction. It means so much and it's beautiful for us because we give so much on the pitch and whenever you come back and you get a welcome like this it's always good."

"Amazing. It's difficult to put into words, it's something you have to feel. It's phenomenal. You see how many people come to see the bus tour, it's more than I expected. To see grandmas, grandpas, babies, all kinds of ages - you see how much it means to the city."

"It's an amazing feeling to share with all the boys. It's special, seriously. You see all these people: it sums up what it means to play for the club and it's special to be part of history."

"For sure I was really convinced about the quality of this team but you never can plan a Champions League campaign. It's just difficult, you need to see how the draw is, the opponents and everything, so you never know.

"Going to the final again and winning it is unbelievable. It's a fantastic team and we will try to keep this up and go again, we know that we are strong.

"It is absolutely unbelievable. There are not a lot of clubs in the world where you can make this - winning titles and having so much togetherness with the team and the fans."

"I have no words to explain because I thought it was a great thing just winning the Champions League, but when you are here feeling the emotion of these people, our supporters, it's amazing.

"I'm happy to have my teammates because this team deserved to win something big this season because we made a great season in the Premier League and the Champions League.

"I put my heart on the pitch and I gave my best for my teammates to win the title and bring the cup to Liverpool."

"What we did in previous years, unfortunately we lost a couple of finals. But all these people never stopped believing in us. It's a gift to them and they say thank you. It's both ways - incredible.

"Sometimes you need to be knocked down to get up again. It's about character, it's about emotions, it's about many things. I think this team has everything."