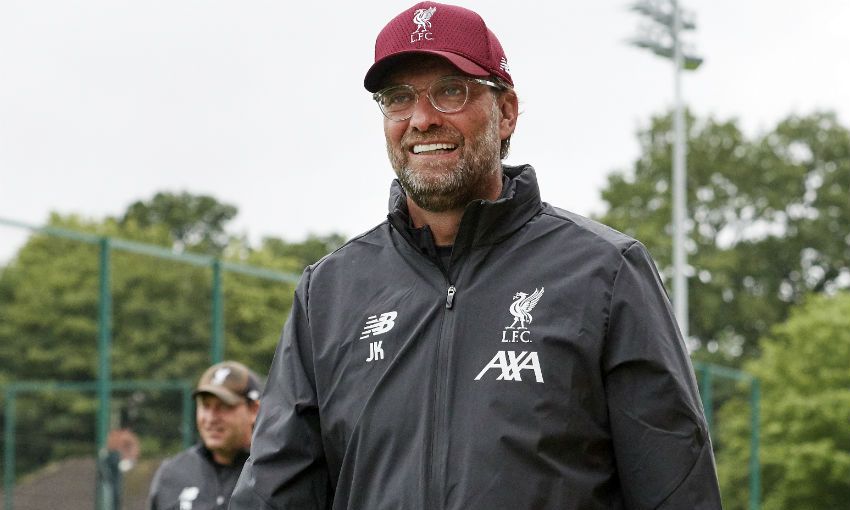 The door to Liverpool’s first team is open for the youngsters who will get their chance to shine at Tranmere Rovers and beyond during pre-season, Jürgen Klopp has stated.

Thursday evening’s short trip to Prenton Park represents the first of seven friendlies the Reds will play at home and abroad prior to the Community Shield meeting with Manchester City in early August.

International commitments mean members of Klopp’s regular squad are reporting for pre-season training at staggered intervals throughout the summer - and, in turn, that is set to provide an opportunity for several Academy prospects to perform at senior level over the coming weeks.

And the boss - who expects Simon Mignolet to feature against Tranmere - has explained that he would welcome the sight of returning loan players and youth-teamers impressing ahead of 2019-20.

“I would say it’s quite difficult to immediately be part of that first-team squad because we are really strong, but it’s always like it is. These boys are our future if they want to be our future. That’s how it is because for that they need to take all the steps,” Klopp told Liverpoolfc.com.

“They are at a wonderful club with wonderful coaches. Whoever leads the training, whether it’s me or Pep [Lijnders] or Critch [Neil Critchley] or whoever, it will always be a good session. But this pre-season is for them exciting of course.

“A lot of them will be part of the US tour, we have to use that because of the number of games we play. We need all of them and that’s nice. Only as an example, Bobby Duncan and Paul Glatzel: our offensive line that played last year is coming pretty late in joining us in the pre-season, so we have to be creative system-wise and all that stuff, but there will be moments when they have to play.

“Not only at Tranmere or whatever, but in America as well when we play Borussia Dortmund and all the other guys. So, it’s good and it’s always like this: when you are already in the club, then the door is always open for you to the first team.

“The thing is you have to go through by yourself - we only open the door, we don’t push you through. So, I’m open, I’m very open for exciting football players and if the boys show up, good for them and good for us.”

After a cohort of 16 players reported to Melwood to begin pre-season training last Saturday, the likes of Divock Origi and Dejan Lovren followed in the proceeding days, while Mignolet is due to return this week.

On the possibility of Lovren and Mignolet playing at Prenton Park, Klopp said: “Dejan, we will see. Simon, [he’s a] goalkeeper, yeah. We struggle with goalkeepers at the moment, we have a very young group here.

“Ali won the Copa America title at the weekend, he will not be involved! Simon comes back and I think he will be fine to play. Caoimhin [Kelleher] is injured and that will take a little while, Kamil Grabara will come back a little bit later but has a bit of pain after the U21s [European Championship] as well.

“So it will be interesting, maybe the subs at least will be very, very young, even the goalkeepers, but that’s how it is. Problems in football are only there to find a solution and in pre-season you have a lot of problems and always try to find the solution, so we will do our best.”

This marks the fourth year in succession that Liverpool will face Tranmere in the early stages of their preparations for the upcoming campaign, with Klopp looking forward to the test in store from newly-promoted League One opposition.

“Tranmere we always follow a little bit, our U23s play there most of the time. We call it every time we play this game the ‘John Achterberg Trophy’!” he smiled.

“We are only five days in training, intense sessions, a lot of players are not here. A lot of kids will be involved, that’s clear. How it always is, it’s not about the result but it’s about the performance and all the boys starting or coming on on Thursday will wear a Liverpool shirt and they have to behave like that. They have to do the things we want them to do because that’s part of our DNA.

“We have to show that, how we work, the work-rate must be as high as possible on the day. So, with heavy legs, still try to do your best, that’s the reason for pre-season games: to get a bit of rhythm.

“In the first game that will be difficult, but step by step to get a bit of rhythm in these games and fight back, whatever happens in the games.