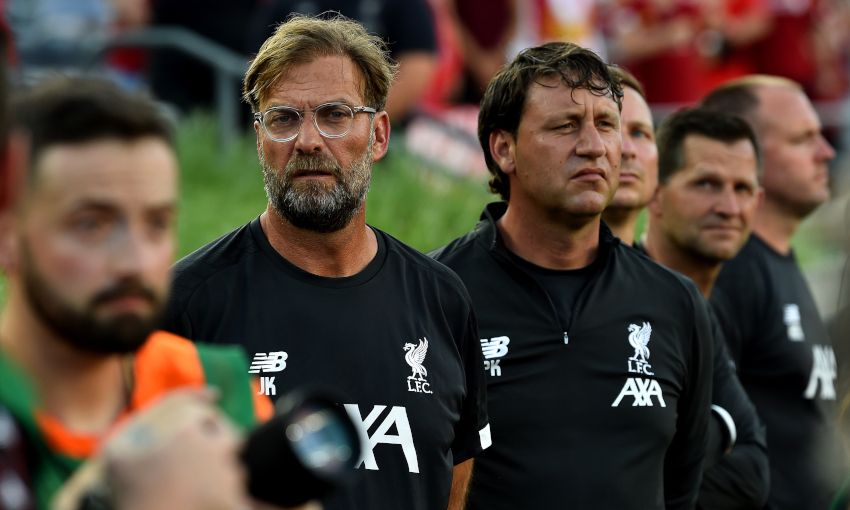 Jürgen Klopp felt there were more positives than negatives for Liverpool to take despite suffering a 3-2 defeat to Borussia Dortmund in Notre Dame.

Despite goals from Harry Wilson and Rhian Brewster (penalty), the Reds were beaten for the first time during their pre-season schedule as Paco Alcacer, Thomas Delaney and Jacob Bruun Larsen netted for the Bundesliga side.

Nevertheless, Klopp believes the runout was largely beneficial, particularly as he was able to give Jordan Henderson, Virgil van Dijk, Georginio Wijnaldum, Andy Robertson and Trent Alexander-Arnold their first 30 minutes of the summer.

Read on for a summary of the manager’s post-match press conference at Notre Dame Stadium.

On his impression of the stadium…

It’s a brilliant stadium, the whole facility is brilliant. The pitch was difficult because it’s not a soccer pitch; they put grass on it and everybody tries their best but at the end you saw, these two teams can play much better football but it’s difficult when the ball is not rolling because it’s an important part of the game that the ball rolls. Apart from that, it’s an incredible place. Whoever didn’t know it, come to Notre Dame, it’s brilliant.

On the game and the chance to give players minutes…

It was very, very important. It was tough for both teams with the circumstances – wow, it was really warm. So immediately when we had to come out again for 15 minutes with the same line-up from the first half and Dortmund could change and bring fresh legs, that was the decider, I would say. There were a lot of good moments of football, it’s sure that you see they are a step further in the pre-season than we are. But we had to fight, we had to defend these situations, a lot of times good. I saw a lot of good things. But the goals [conceded], of course… the first a throw-in, the second a second ball after a corner, not too cool, the third goal I don’t know exactly how it happened.

We scored our two goals, which was absolutely nice, especially the first one. We had chances. We changed [the players] and it was a very, very important session for all of us; 60 minutes for one team was maybe a bit too much but they had to go through this, and the 30 minutes for the other team was exactly right. That’s the situation we face in the moment, that’s pre-season, early pre-season. We have to do it like this, we have to use it as the main sessions in our pre-season.

How we conceded the goals was due to the lack of organisation around the situations. When you change a lot in the team then it’s quite difficult to have the perfect organisation. That will be better later in the pre-season and in the season of course, it has to and it will be. Apart from that, all good. There were a lot of good things, some things which I didn’t like, that’s normal in pre-season. I decide what we do in training and I know how much we did yesterday in already pretty warm weather conditions. I still don’t like what I see in the game very often in the pre-season but I know the reason for it. I’m not over the moon when I think about our performance but I know there’s a lot to come and it’s all OK.

What we could learn tonight is that other football teams have very good footballers as well. Obviously, Borussia Dortmund have a lot of them, they had a lot of solutions tonight line-up-wise. They struggled a bit in the last line, probably the reason Mats Hummels played so long, but apart from that all positions [were of the] highest quality. It is a really nice squad, but I don’t want to be too positive because probably some German people listen [to this] as well and put pressure on them, that’s not my intention. It is pretty impressive what they do.

He’s an exceptional talent but he’s not the only one in England at the moment. That age group has already a few - Rhian Brewster is the same age. [And there is] Raheem Sterling, for example. I don’t want to forget any wingers, but there are a lot of talents; young and very, very promising players in England. There is no doubt about the potential of Jadon Sancho. His speed and body control at the highest speed is his main strength. Being good in big spaces and in small spaces makes you a pretty interesting player – and that’s what Jadon is. Yasser [Larouci] our 18-year-old left-back played against one of the biggest talents in world football and did pretty well the whole night. The pitch helped a little but, but still he did really well.

On the development of football in the United States…

The MLS is growing – it’s growing and growing and growing. There is no problem in America, you see women’s football pretty much dominates the world of football, men’s football is coming up and the only little thing is because of the capacity we play in a football stadium or baseball stadium. So if at one point – and I think it will happen the more the MLS grows – you have 50/60/70,000-people stadiums, pure European football stadiums, that would change the game completely. I am not sure how many teams play here on astroturf, for example, but that’s not how international football is and it all helps. The women’s football shows the potential in America is so big and I think a lot of young talents are coming up. Tonight [Giovanni] Reyna played, Christian Pulisic… Dortmund are very positive about Reyna and Christian Pulisic everybody knows. So, the talents are coming and the understanding for the game will grow, but it is no criticism. If you ask me about the rules of baseball I still struggle. We have a different history – our football, soccer, history is longer and yours in other sports is longer, so it’s no criticism from our side. I think each game we can play and use as a kind of commercial for this wonderful game, we should play. We just have to make sure in the future we can do it on a little bit better surface. Last year [we played] against [Manchester] United in Michigan on pretty much the same surface and we won 4-1, so it is not that explanation but if people see a game first time and think that’s how football should look, no – the ball rolls much more, the players are much quicker and so on, all the guys are more confident.