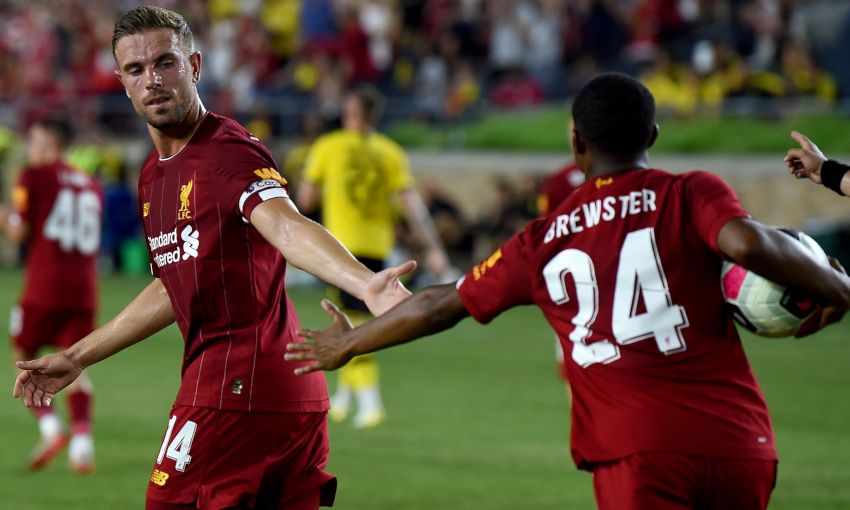 Rhian Brewster was delighted to convert the penalty given to him by Liverpool captain Jordan Henderson in the 3-2 defeat against Borussia Dortmund.

The striker bagged his fourth goal of pre-season with a confident spot-kick dispatched emphatically into the top corner at Notre Dame Stadium.

It wasn’t enough to prevent a defeat for the Reds in Indiana but Brewster – one of 10 players introduced for the final half-hour of the game – was buoyed by being given the responsibility from 12 yards by his teammates.

He told Liverpoolfc.com: “Hendo was walking but he asked if I wanted it and I said, ‘Yeah’. He said, ‘Go on’. I picked my spot and hit it there.

“It’s good to score again but it’s just good to get more minutes and get fitter and fitter each time.

“It’s really nice for them to think that and it gave me confidence to go and take the pen. I’m sure if Millie was on the pitch he would have taken it. It’s good that they’ve got faith in me and luckily enough I put it away.”

Harry Wilson had earlier levelled Paco Alcacer’s opening goal but Dortmund strode clear on the scoresheet through Thomas Delaney and Jacob Bruun Larsen at the start of the second half.

“It’s a lot different to England at the moment. It’s really tough to play in the heat and Dortmund are a very, very good team, they made us run a little bit,” Brewster reflected.

“But it’s good to get more minutes in the bank and hopefully we just push on from there.”

Jürgen Klopp: I love Rhian Brewster - a special guy on and off the pitch

'Rhian is our boy - but I hope he has a day off tomorrow!'