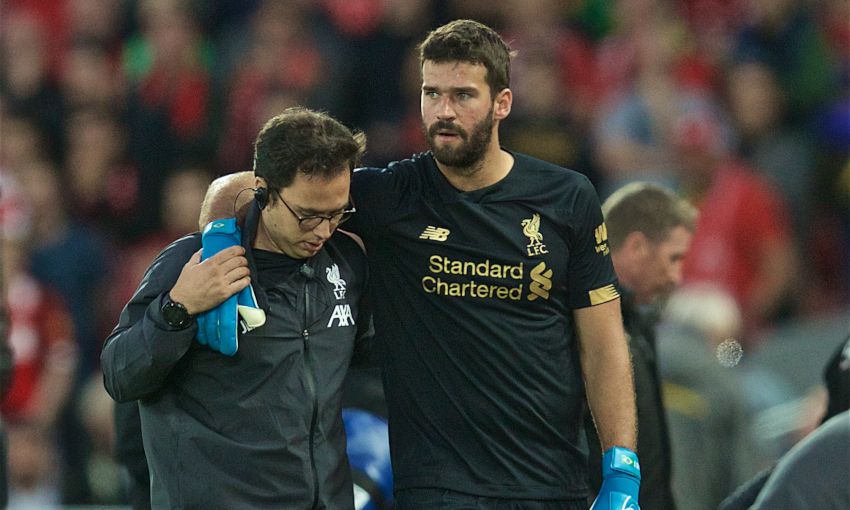 The goalkeeper was forced from the field after 38 minutes of the Reds’ 4-1 win over the Canaries in the opening game of the 2019-20 Premier League season.

Alisson was replaced by new signing Adrian between the sticks and will undergo a scan to determine the extent of the issue in the coming days.

However, Jürgen Klopp has confirmed the Brazilian will be ruled out of the trip to Istanbul next week.

The boss told his post-match press conference: “There is actually nothing bad to say about the game apart from Ali’s injury. That is, of course, not good for us, but we have to see how serious it is and then we have to deal with it.

“It’s the calf and that’s it. He couldn’t carry on, that’s not a good sign. We have to see.

“Wednesday [in the Super Cup], he will not play – with all my experience, I can say that already. He is injured, for sure, so we have to see how much.”

Alisson’s injury presented Adrian with a debut for Liverpool, having tied up his free transfer to the club on Monday following Simon Mignolet’s departure.

Klopp is confident the Spanish ‘keeper has the necessary attributes to step up in the absence of the Reds’ No.1.

“He is a very confident guy and he came in and I don’t think he wanted to sit only on the bench for the next couple of years,” the manager continued. “He made himself ready.

“It is a situation, but if you are in a situation like this you want to have somebody who has played the league and who is experienced. He is 32, a calm guy, emotional as well, good with his feet – how we saw – and that’s really important for us.

“There are a lot of good things, but you still don’t want to have a situation where one goalie is fit. That’s how it is, but we have to see.”

Liverpool are likely to turn to Caoimhin Kelleher as Adrian’s understudy for the Super Cup fixture, with the youngster having recently returned to training following a broken wrist.

Klopp said: “Caoimhin is not [injured], he is back in training but not at 100 per cent. We have to see how he reacts now.

“One of the very young ones is not even allowed to play, he is only 16 [Jakub Ojrzynski], and the other one [Vitezslav Jaros] had an elbow injury early in the pre-season, so we’re a bit short in that position.”