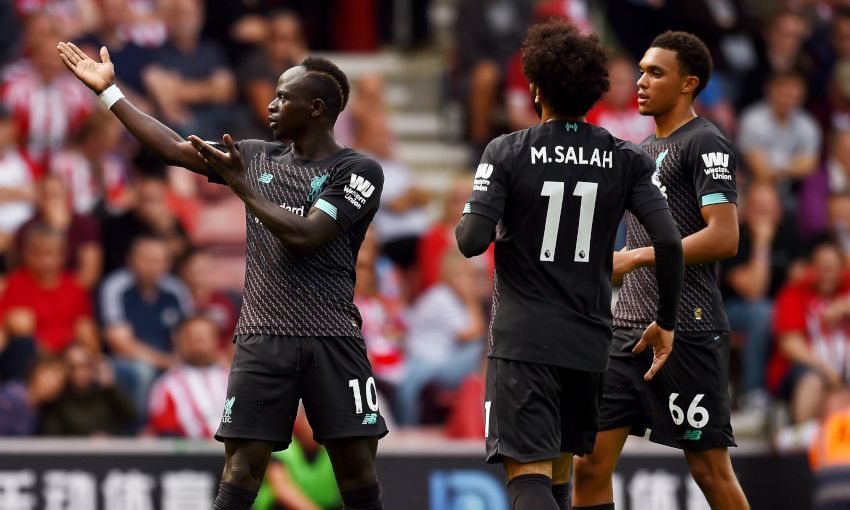 Liverpool made it two wins out of two to kick off the new Premier League season with a 2-1 victory at Southampton on Saturday afternoon.

Sadio Mane and Roberto Firmino were the goalscorers in either half for Jürgen Klopp’s side, who have sandwiched their UEFA Super Cup success with the maximum six points in league football.

It’s fair to say the opening 45 minutes on the south coast were pretty forgettable, with neither side able to find a real rhythm or gain momentum.

But the game’s breakthrough was well worth waiting for, at least for Liverpool, as Mane produced an exquisite strike to put his team in front in first-half stoppage-time.

Collecting a James Milner pass at the edge of the Southampton penalty box, Mane walloped a stunningly accurate curler past the reach of the goalkeeper.

Coming within 72 hours of his brace in the Super Cup final and, indeed, within a fortnight of his return to training, last season’s Premier League Golden Boot winner is wasting no time this term.

The Senegal international is one of only two Premier League players, along with Sergio Aguero, to have scored at least 20 goals in all competitions in 2019.

Victory at St Mary’s established a club record for Klopp.

The German has amassed 300 league points in fewer games than any manager in Liverpool history, surpassing the mark previously set by Sir Kenny Dalglish.

This was Klopp’s 146th league match in charge of the Reds since taking the reins in October 2015; Dalglish reached the threshold in his 150th fixture.

Liverpool have now lost just once in their last 41 Premier League games.

Encompassing last season’s run-in and their opening two games of the new campaign, the Reds are now on an 11-match winning streak in the Premier League.

That equals their best such run in the PL era, matching the successive victories registered between February and April 2014 under Brendan Rodgers.

Klopp’s side are one victory away from emulating the longest winning run in the league in Liverpool history – the 12 in a row from April to October 1990.

A series of stellar performances by Firmino so far this season were missing only one thing: a goal.

That changed midway through the second half, however, and it was a typical effort from the man who lifted the Champions League with club and Copa America with country over the summer.

Aided by Mane’s pressing high on the left flank, Firmino carried the ball out of the reach of opposition defenders before planting a low, angled shot into the net.

The No.9 is now just one short of a half-century in the Premier League for Liverpool.

Wednesday’s extended Super Cup showdown with Chelsea – which involved extra-time and a penalty shootout – tested Liverpool’s legs at such an early stage of the season.

They had no choice but to go again, however, and deal with a tight turnaround that saw the squad fly back from Turkey on Thursday, train and then travel to Southampton on Friday, and play again on Saturday.

But it was job done as Klopp’s charges took greater control of the contest in the second half and gained a crucial cushion when Firmino rolled an excellent finish past Angus Gunn on 72 minutes.

Danny Ings’ response from an attempted Adrian clearance set up a difficult final six minutes – plus four added on – that the Reds survived to claim three points.

With a tricky opening week of the campaign successfully navigated, they now have a week to prepare for a tussle with Arsenal at Anfield next time out.