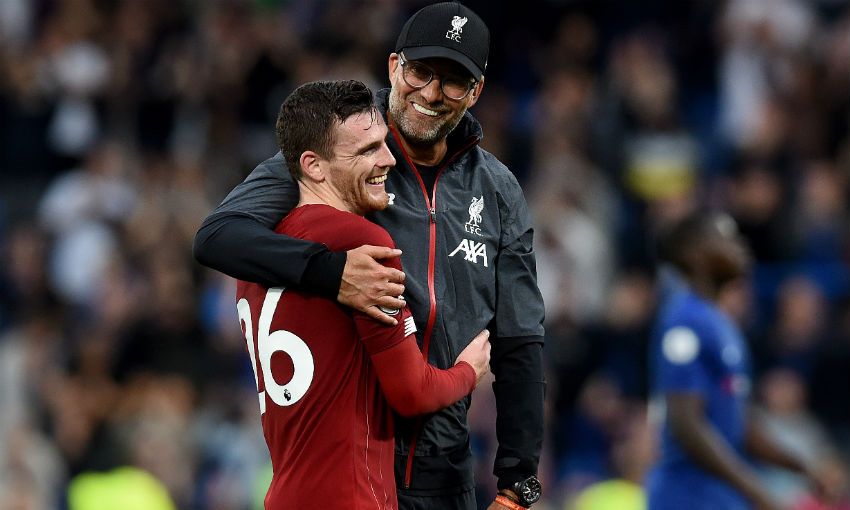 The Reds maintained their five-point lead at the top of the table after first-half goals from Trent Alexander-Arnold and Roberto Firmino had put the visitors 2-0 up at Stamford Bridge.

But they were required to dig in during the closing stages as N'Golo Kante's 71st-minute strike put the hosts back within a shout of grabbing something from the match.

"I'm really happy with the performance and the game obviously because it was so difficult," Klopp told Liverpoolfc.com post-match. "I don't expect us to dominate Chelsea, that they don't have any chances.

"We defended brilliant, not only midfield or last line. I got asked already about the little offside situations, but they were really offside because the last line was really awake, they were really there. That's cool.

"How we put them under pressure and how we reacted in the last line was really good.

Two members of the back four played starring roles in the goals Liverpool recorded in the capital.

Alexander-Arnold opened the scoring with an unstoppable free-kick after 14 minutes before Andy Robertson then crossed perfectly for Firmino to nod in.

"That he [Alexander-Arnold] can shoot like this should not be a surprise anymore," Klopp continued. "That we are that smart in that situation to change the angle for him...

"The roll from Mo gives Mo an assist which is nice and on the other side, it was a much better angle. It was pretty much not to save, to be honest.

"The other one is Robbo is better crossing rolling balls than not-rolling balls. Brilliant cross, Bobby there, fantastic goal."