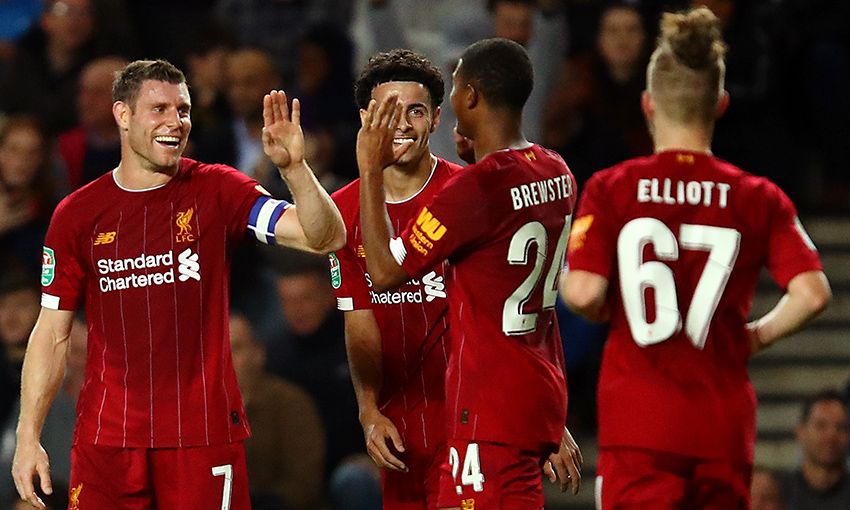 Jordan Henderson has detailed how the guidance of Liverpool’s senior players in last week’s clash with MK Dons was one of the most pleasing aspects of the 2-0 win in the third round of the Carabao Cup.

Also in the starting line-up was the likes of James Milner, Adam Lallana, Alex Oxlade-Chamberlain, Naby Keita, Joe Gomez and Dejan Lovren – and Henderson feels they deserve just as much credit as the team’s younger starlets.

He wrote in his column in the official matchday programme: “The thing that struck me most watching and supporting the team in the Carabao Cup against MK Dons last week was the importance of experience and youthful freshness for a modern-day squad.

“Our two goalscorers on the night highlight it. The second was from a brilliant header from our 17-year-old Dutch defender Ki-Jana Hoever. But our first was from...well...a slightly older James Milner.

“As is always the case, the focus on the night fell mainly on the younger stars, because it was a first opportunity for many watching to see them in that sort of environment.

“We were all buzzing for Curtis Jones to pick up the MOTM award, particularly knowing how much it will have meant to him being a local lad. Well-deserved as well – he was brilliant. But I think Curt would be the first to admit there were plenty of decent candidates for it on the night.

“To see Harvey Elliott play as maturely and as confidently as he did, aged just 16, was tremendous. And Caoimhin Kelleher produced a couple of worldie saves to show why he’s so highly thought of.

“In terms of competitive senior debuts for Liverpool I think I’m right in saying there were five on the night: Caoimhin and Harvey, as already mentioned, along with Rhian Brewster, Herbie Kane and Sepp van den Berg. We’re delighted for all five of them as making your debut for a club like Liverpool is always special, and to do it with a win was a magnificent effort.

“However, people shouldn’t ignore the role and guidance of the more senior lads. I’ll be truthful, playing in situations like that isn’t easy – in fact, it’s outright hard. The gaffer said so himself. It’s a group that haven’t played together before, so the responsibility on the experienced guys to help the team through it is so important and underlines how lucky we are to have the professionals we do in our team. In games like that you can’t just worry about yourself and none of our lads did that.

“The boys provided superb leadership for the teenage lads and I know they’d have all appreciated it and benefited from it.”