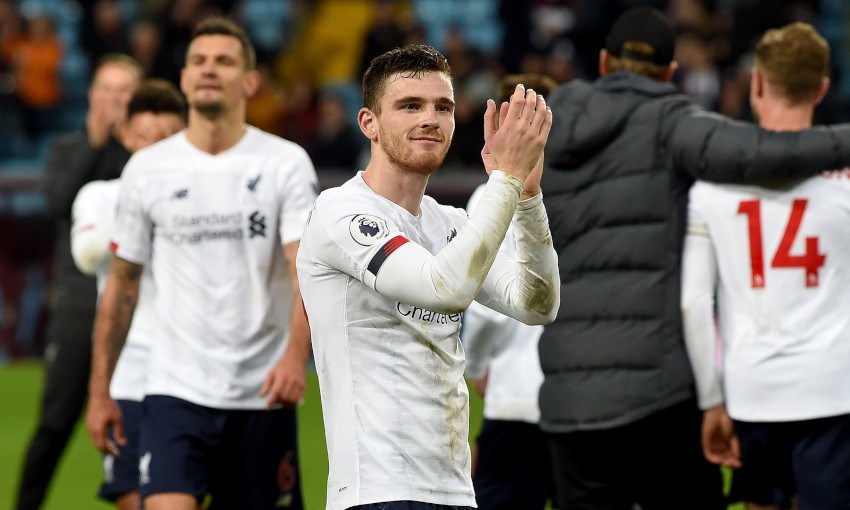 Andy Robertson can't remember scoring a headed goal before his equaliser at Aston Villa on Saturday – meaning quite a surprise for his father on holiday.

The Liverpool left-back got his side on terms at Villa Park with a surge into the box to meet Sadio Mane’s deep cross with a firm nod beyond the grasp of Tom Heaton.

Robertson’s 87th-minute intervention sparked a dramatic turnaround for the Reds, who went on to snatch three points deep into stoppage-time through a Mane header of his own.

It was a timely second goal of the season for Robertson and, he believes, the first of his football career via his head. 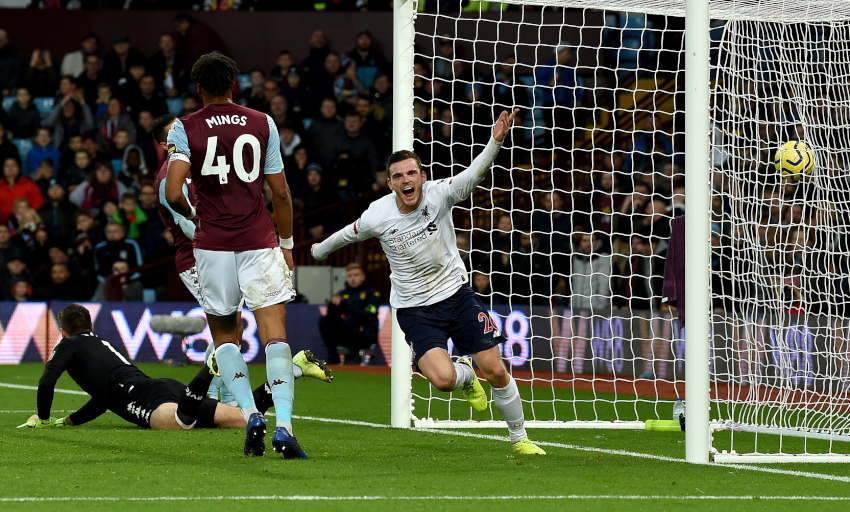 “I think that’s my first ever header, to be honest!” the No.26 told Liverpoolfc.com post-match.

“My mum and dad are away on holiday right now and my dad will be very surprised when he sees I have scored with a header! Even when I was an U11 and U12 I don’t remember that, so I was delighted.

“I knew I could come in at the back post. A lot of balls had gone in there during the game, so I knew if I could just get myself into the position and just get good contact [I might score]. And luckily it hit the back of the net.”

It was the fourth Premier League match in a row in which Liverpool have come from behind, produced late drama or both.

“We are getting quite good at this!” laughed Robertson. “I don’t think the fans’ nerves can maybe keep with us just now but we have scored a lot of last-minute and late goals.

“Like we said last season as well, it’s all about the work that goes into pre-season and we worked so hard to get fit and we believe we can go right to the end, and we went 95/96 minutes today and that’s why when teams start to get tired we kind of find our second gear and we started getting good chances.

“We just couldn’t put them away but luckily both of us popped up and you can still hear our fans outside! It was a big one for us today and we are just delighted to get the three points.”

Mane followed up his assist for Robertson with the crucial winner – a clinical header angled inside the left post from Trent Alexander-Arnold’s low, near-post corner.

The Senegal international reached double figures for the season with the goal as his outstanding consistency over the course of the calendar year continues.

“Sadio has been magnificent since I’ve come in, but 2019 I think has been Sadio’s year,” added Robertson. “He’s really turned it up; he obviously shared the Golden Boot last year and he’s off to a flier this year.

“It was a smashing goal. We worked on it in training, worked on the front post, and we probably didn’t work on it quite as well as Sadio’s just headed in Trent’s ball, but that’s why we do it in training and luckily the finish, the big moments happen in the 94th or 95th minute, and he pops up. An incredible finish.