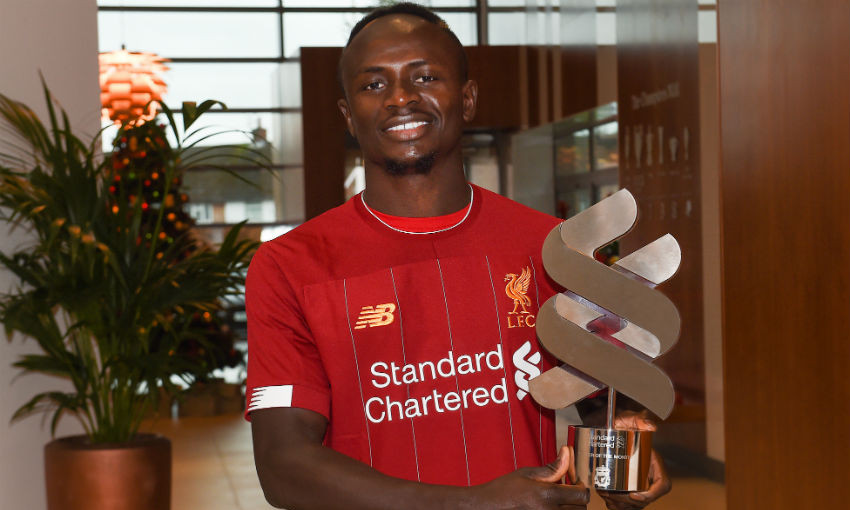 Fabinho's City strike up for Premier League Goal of the Month

Sadio Mane has been named Liverpool's Standard Chartered Player of the Month for November.

The No.10 continued his fine form throughout the month, scoring three times while starting five of the Reds’ six fixtures in the Premier League and Champions League.

And that was sufficient for Mane to receive the most votes in our poll on Liverpoolfc.com, ahead of second-placed Fabinho and Virgil van Dijk in third.

“For sure I am happy to win it and, like I always said, I’m here trying to be my best all the time and it’s an honour for me. It has been a great few weeks for me and my teammates so I think we just need to keep on going,” the forward told Liverpoolfc.com, upon being presented with the award at Melwood.

“I think the fans make everything so I want to thank everyone who voted for me. Big love for you guys!”

Watch: Mane on winning Player of the Month

Mane’s November began with a match-winning contribution at Aston Villa - the Senegalese assisting Andy Robertson’s 87th-minute equaliser before glancing in a 94th-minute winner himself.

A late substitute appearance against Genk preceded another goal, this time in the 3-1 victory over Manchester City at Anfield, before he opened the scoring in a 2-1 win at Crystal Palace.

Mane then started and finished both matches as Jürgen Klopp’s side drew 1-1 with Napoli and beat Brighton and Hove Albion 2-1 in the final four days of the month.

When asked to select his personal highlight from November, Mane replied: “I will go for Aston Villa. It was a really, really tough game and I think we scored four minutes before the end.

“We have big respect for Aston Villa but I was thinking we could go there and win, but the game was really tough. I think the team spirit was fantastic and we pushed as a team until the end and finally we got the win that I think we deserved, to be honest.”