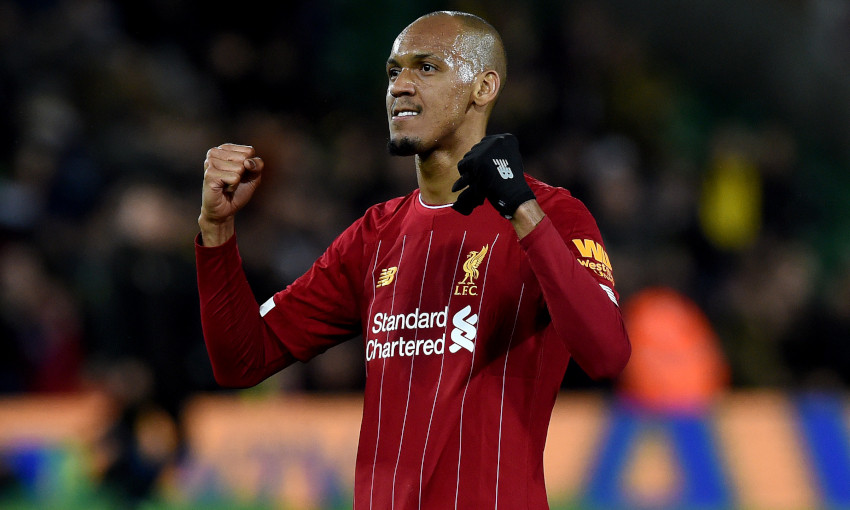 The prospect of Jordan Henderson’s absence from Liverpool’s immediate fixtures has left Fabinho considering how he can step up to cover in place of the sidelined skipper, the Brazilian has explained.

Henderson is facing a short-term spell on the treatment table after sustaining a hamstring injury during last week’s Champions League tie against Atletico Madrid in Spain.

An initial diagnosis of a three-week recovery period meant the captain sat out Monday’s win over West Ham United and could also be ruled out of selection for forthcoming clashes in the next fortnight, including the weekend trip to Watford.

Should that prove to be the case, Fabinho has outlined the physical and mental attributes that the Reds will miss from a player he believes has been one of the team’s most outstanding performers - and how he is aiming to compensate in terms of on-field leadership.

The No.3 told Liverpoolfc.com during a chat at Melwood: “Hendo has been one of the team’s best players this season, without a doubt.

“His performances have been really good and his presence on the pitch doesn’t just help us with the ball, but also with his attitude. He is the captain.

“Now I need to try to help the team out with this kind of leadership; of course, we have different personalities, but hopefully I can help a bit in this respect.

“As I said, Hendo has been one of the team’s best players and he’ll undoubtedly be missed, but this team has shown, even with important players missing, we’ve maintained our high standards.

“Unfortunately, it was Hendo that got injured this time around, but it is an opportunity for other players to show they’re up to the task, that they can come in and make a difference as well.”

The manner in which Liverpool have coped with the absences of key players during the campaign so far underscores Fabinho’s point.

Indeed, the Reds were also without the 26-year-old’s own services for a period of around two months after he sustained ankle ligament damage in late November.

“It is not easy for the other players to be ready to step in and maintain the high standards of the injured player,” Fabinho said. “But this season, the response by players stepping in has been excellent.

“Alisson’s injury was the first of the season, but then myself, Joel and Sadio have been injured, as well as others - but the team has maintained its very high standards.

“Our schedule is very long, so it provides the opportunity for all players to play and to be physically prepared and that helps.

“I think the players that have come in have really grasped the opportunity and showed how hard the team has worked. We’re a strong and talented team.”

After a 12-match absence, Fabinho returned to action at the beginning of the year, coming on as a substitute during the victory over Manchester United on January 19.

He’s made a further seven appearances since and feels he is edging his way back to peak form.

“Since I’ve returned, I’ve had a good run of games and I completed the last two, which is important for me,” Fabinho explained. “When you’re coming back from an injury, it is important to get your confidence back, to get your fitness back - and the only way to do that is by playing.

“It’s important for me to be playing and to feel I am helping the team. Of course, I believe my performances can improve, but I am pleased with my recent ones.

“Unfortunately, I got injured at a time that was the best moment for me - I was generally feeling great, very confident, but this happens in football and we need to be prepared for everything. As I got injured at this great moment, I had a really strong desire to come back, to get back into the same form I had been in.

“So that’s my objective - to get back to my previous form and help the team as much as possible.”