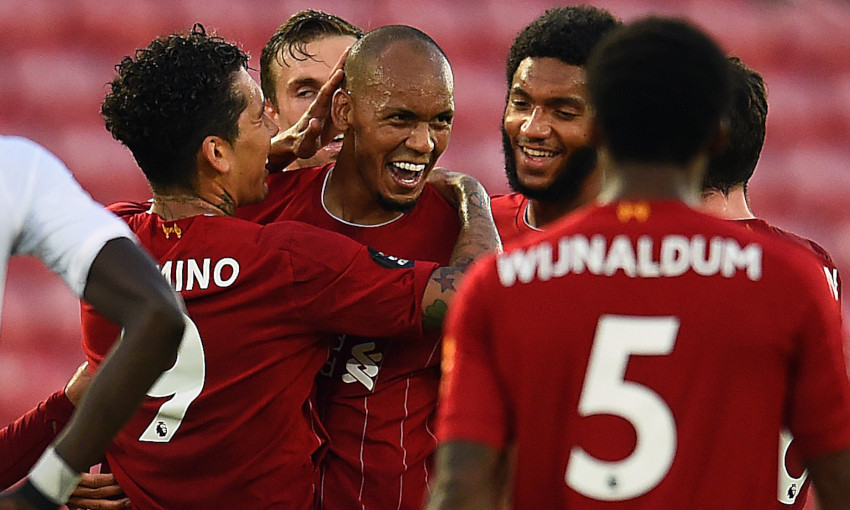 Liverpool edged closer to securing the Premier League title with a 4-0 victory over Crystal Palace at Anfield on Wednesday evening.

Trent Alexander-Arnold zipped the Reds into a 23rd minute lead with an exquisite free-kick from distance and Mohamed Salah doubled the advantage just before the break with a neat finish.

Fabinho added a third in the second stanza, drilling in from range, before Salah sent Sadio Mane through to add a slick fourth.

The result means Liverpool require two more points from their remaining seven fixtures to be crowned champions – or they will clinch the prize for the first time in 30 years should Manchester City fail to beat Chelsea at Stamford Bridge on Thursday night.

Liverpool were able to recall Salah and Andy Robertson to their starting line-up after the duo had recovered from minor knocks. They were part of four changes made by Jürgen Klopp, with Joe Gomez and Georginio Wijnaldum also coming in.

James Milner and Joel Matip missed out due to issues sustained during Sunday’s goalless draw at Goodison Park against Everton.

Liverpool got under way knowing a win would ensure they took a significant step towards getting their hands on the Premier League trophy.

It was the hosts who created all the early pressure – and Wijnaldum was left clutching his head in his hands when he skewed wide inside the area from Andros Townsend’s wayward attempted clearance.

Jordan Henderson then scooped high into the Anfield Road end from a decent opening before Roberto Firmino’s exchange with Mane resulted in the former having a low drive saved by Wayne Hennessey.

Palace were dealt an early blow, too, when Wilfried Zaha hobbled from the field with 16 minutes on the clock.

And the Reds’ pressure finally told midway through the first half. Alexander-Arnold delightfully curved a free-kick over the wall and into the corner of the goal from 25 yards to reward the early dominance.

Liverpool went close to furthering their advantage on 28 minutes, but Henderson’s instant return from a half-cleared free-kick cannoned against the base of the post.

Wijnaldum swiped wide of the upright soon after and Salah couldn’t direct an intercepted clearance by Hennessey into the unguarded goal, while Max Meyer drilled wide at the other end for Palace.

However, the Eagles’ resistance was broken for a second time just before the interval. Fabinho lofted a ball into the path of Salah’s dart into the area from the right. The Egyptian used his chest to control and knock it into space before steering in.

The Brazil midfielder went from creator to scorer 10 minutes after the restart. He took aim from distance and rasped a cleanly-struck effort into the corner to make it 3-0 to Liverpool.

After Wijnaldum and Salah had gone close, Liverpool did grab a fourth through Mane.

Firmino and Salah exchanged passes on halfway before the latter sent his fellow forward through on goal, with the No.10 finding the corner with an unerring finish.

With the home side in complete control, the likes of Neco Williams and Harvey Elliott were afforded late run outs – and only a fine Hennessey save denied Salah a second in stoppage-time, while the ‘keeper also thwarted Williams.

Nevertheless, a 30-year wait for the league title could be brought to an end as early as Thursday night as Liverpool tightened their grip on the prize.